Gents.
I would appreciate your experienced views on a problem with my Shark 1 HID flashlight.
The unit is about 2.5 yrs old & out of any warranty.
I would reckon that its been charged a maximum of 150 times & run for long periods discharging the unit fully often in one single use.
Then recharged & left for next use.
I have noticed performance decline from the start of October 2009 when the unit was pressed into service again.
I now have a run time of 10 mins on 24w setting before the unit goes out so I consider it of no use unless I replace the cells.

I Have done some looking around.
Wolf eyes would like to sell me half a flashlight to fix my problem at over £100 !
That part is an LRB-368 DL. Not a set of batteries but a complete aluminium lower housing containing the charge adapter,
12 led board, circuit driver & battery pack plus contact plate.
( You can just see the lower housing in camera shot)
I have dis-assembled the the unit that Wolf eyes want to sell me below : 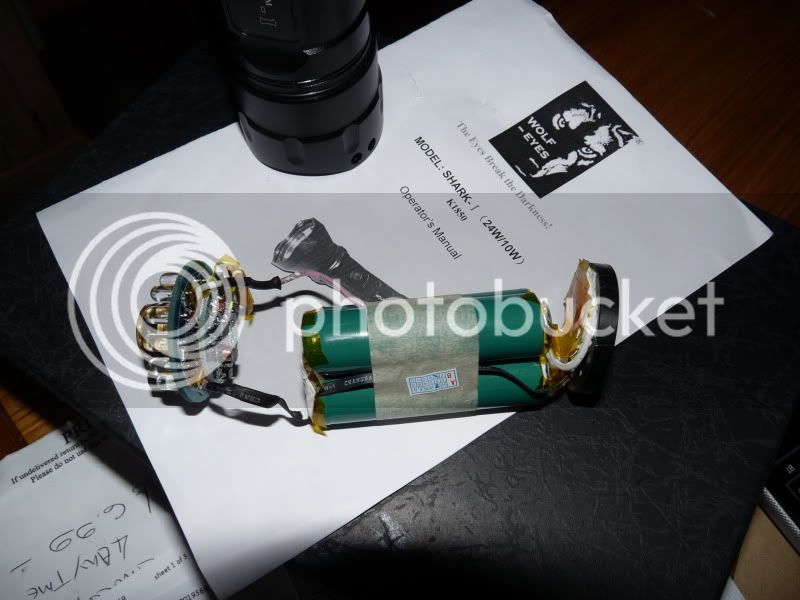 I would appreciate any comments on the performance & an economic solution please as I can't be the only one who is facing this problem.

As this will entail soldering new cells into position, I think this belongs in the Batteries section, where members experienced in doing this will be able to advise you.
T

The way i see it, just remember where everything is soldered (polarity), buy some decent 18650 flat tops and solder them in place of the current cells.

Li-ions don't like being fully discharged, and they don't like to wait fully charged either. You will have to replace them in two years or so. But it won't cost you 150$, more like 15$ if everything else holds up.
T

Thanks to both of you for your help.:thumbsup:
You confirmed my own thoughts.
I have purchased 3 x AW 18650 2600mA & will break out the soldering iron.
Still, buying quality li-ions still sets you back about £40 worth here with not many suppliers.

I don't know much about batts, but aren't the Li-ions known to react badly in overheating ? (

I've heard about Li-ions exploding while someone was trying to solder directly on their poles.

Please check with others who have done it before.
T

Of course you must be gentle with soldering cells, but don't worry it shouldn't be that bad if you know how to solder.
T

Hello
The point is well taken re soldering li-ion cells.

I am no expert at soldering but I have been doing it for over 25 yrs mostly in auto electrical harness & lighting repairs.
The production cells are soldered with contacts so I have little choice but to replicate.
With soldering, I have good days & very average days so I will wait for quiet day in the work shop & get to it.

The key thing here is to make sure you don't short out anything while soldering and de-soldering stuff. I suggest you insulate every wire once you de-solder it and generally manage wires one by one... Also double check all the polarities. Its no rocket science, but just a small slip and you can make a mess out of those cells...

I had hoped someone else would respond, as soldering Li-Ion cells is by no means a straightforward job, and you'll need to know what you are doing.

There are numerous threads here in the Batteries section on this topic. Using the CPF search, type "soldering" as the keyword, select "Search titles only" just below that, and confine the search to the Batteries section. Read through some of those threads and you'll pick up some good advice.
T

Thanks again all those who took interest.
Cheers
Darren
C

"tabbed" Li-ion ? with some kind of extensions on the poles you mean ?
T

Hello
Yes, 3.7 volt Li-ion with tabbed pole extension pre-spot welded on.
What is for sure is that the quality of work on the internal circuitry & wiring is not good imho.
I can see why they try to make this a sealed unit.
The soldered joints are not that good either.

What I can't understand is why they don't make an 3 battery cartridge holder as with other
Wolf eyes flashlights, including another HID unit within their range.

Having to replace half the flash light at high cost is a poorly thought out design, or good
dependent on wether you are the customer of the manufacturer !:thumbsdow

Not so happy & I have doubts that just replacment of batteries will fix it.
I hope I'm wrong.

Hehe you sure take your time to solder those 3 cells together. =) The electronic part will either work or won't work at all. I would go ahead and just put the damn thing together and be done with it, if it goes

it was time to buy a new one anyways!


Stupid design indeed, a thing you should have thought about when you were buying the light, not two years later
T

T0RN4D0 said:
Stupid design indeed, a thing you should have thought about when you were buying the light, not two years later
Click to expand...


Yes, hindsight is a useful tool along with glass hammers & chocolate radiators.

I had expected longer service life & to not have to replace half the flash light in the space of 2 yrs.
Maybe I am expecting too much.

T0RN4D0 said:
... a thing you should have thought about when you were buying the light, not two years later
Click to expand...


Now, that's not fair, i seriously doubt if there is a single person in this forum that hasn't overlooked much more serious "drawbacks" to get a flashlight he liked.
In fact, i think that's the rule and the opposite is a rarity.
L

Hi,
I have a Shark 1 too, & its been a very good light. Its about 3 years old and the cells also lost their performance (or maybe maybe one of them), so I can understand your dilema.

I've done away with the rear LED circuit board.
Temporarily I soldered 3 unprotected 18650 in series and it worked fine & would shut down at about 9.5v to 10v. Charging the battery pack was difficult and a lot of care was needed so now I've stoped using it for the moment but I need to have it going again for winter time when I use it a lot.

The solution I'm going to use is to solder (very carefully) 3 x 18650 protected cells in series but conect + & - tap wires to each cell and charge them individualy thus ensuring each cell remains balanced.

Hi Light force
Thanks for posting. Pleased I'm not the only one
My attempts to get mine working have failed.:mecry:
The wiring to the driver circuit in between the two board, one of which mounts the leds, is toast as well.:shakehead
I would appreciate it if you could show me how you have done yours please.
If you could clarify what you are planning by posting pics or a diagram here or send one to me via email through pm,
I would owe you big time.
Would prefer to avoid the

And gents, thanks for all of you taking time out to help.

Check You Tube on battery packs. There are some soldering video clips there.

The key is having a sufficiently hot iron, the proper flux and solder, and the right shaped soldering bit. From what I've seen, the trick is to score the ends first, apply some flux, then adhere a thin bit of solder on top. With a hot enough iron, the solder quickly melts and then grabs the outer battery surface before the battery internals have a chance to heat up. Then when soldering on a tab or wire, the outer layer of solder liquefies and hardens before the battery surface has a chance to heat up much. A chisel bit on the iron is a must, as the typical "point" bit won't apply a wide enough area of heat to melt the solder quickly enough.

Finally, do not forget to wear safety goggles and protective clothing.

Any corrections to that? If so, please post. :candle:
R

Greetings! In honor of this thread's high standing in the "wolf eyes battery" search on Google...

My attempts to source a replacement have yielded zero results (regardless of cost), so I'm keen to hear whether anyone successfully rejuvenated their LRB368 pack. Mine only lasts about five minutes.

Or has there been a new development? Has anyone found a better way (other than to simply chuck the whole thing)? I realize there are a slew of new & much-improved lights released since this old tank was the greatest thing, but...
R

Okay - I found a site that's selling them for U$119, but I'm still waiting for their confirmation of inventory. That aside, $119 seems pretty steep for a three-pak of 18650's and a ring of LED's. I wish I could just send my pack somewhere to have it rebuilt! Quite frankly I am beginning to wonder if I'm going to end up tossing the entire light in the trash. That would be unfortunate.
You must log in or register to reply here.
Share:
Facebook Twitter Reddit Pinterest Tumblr WhatsApp Email Share Link

Best price/performance 18650 and best place to buy (USA for starters)?