couldnt post in the reviews forum for some reason so heres a quick comparison of these few lights. 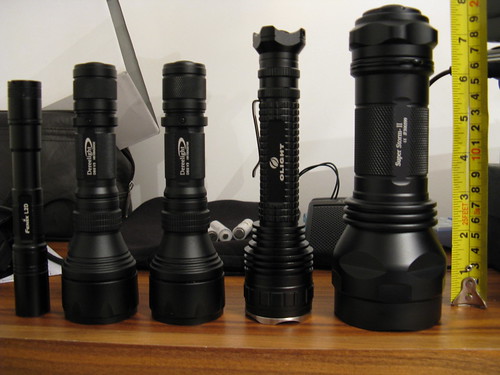 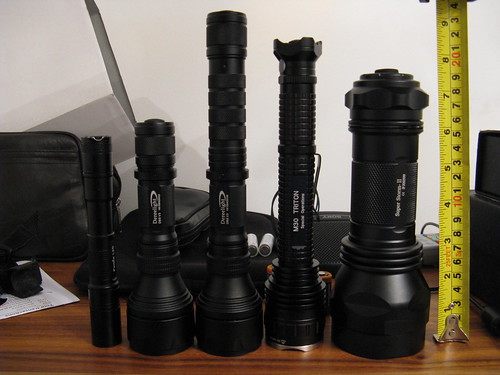 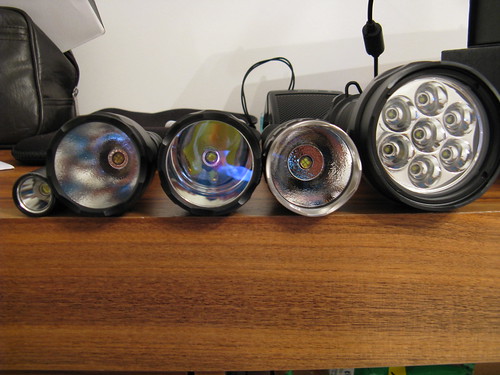 camera held direct above the light. first tree trunk on the right is 70 yards, then 5-10 yards between them. 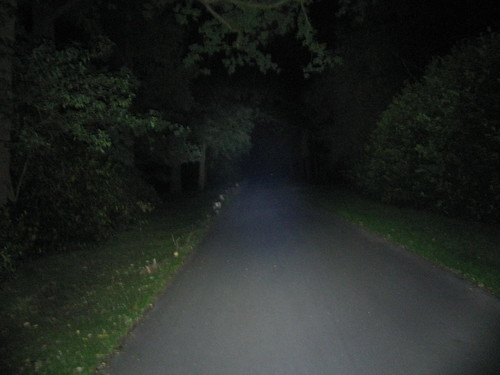 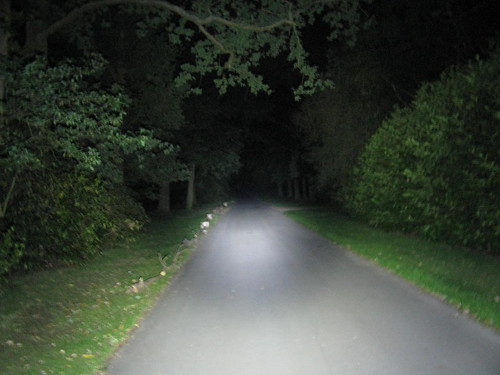 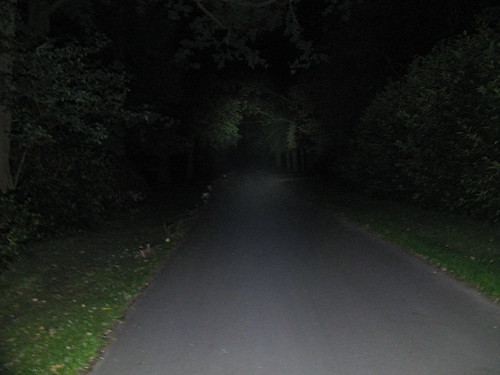 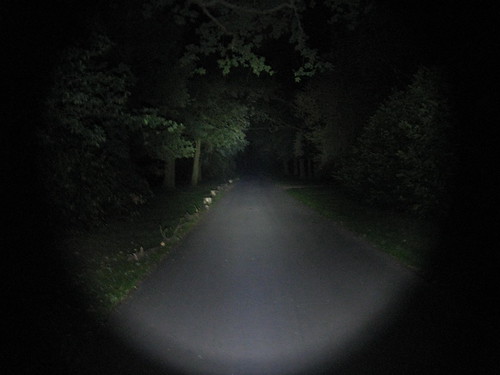 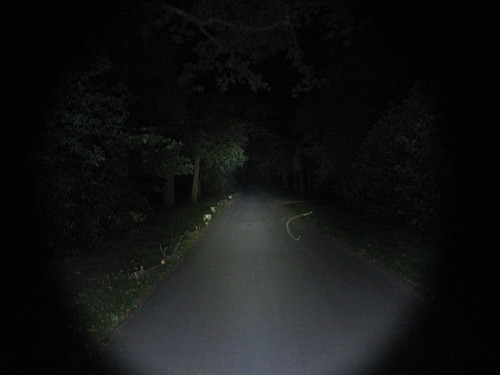 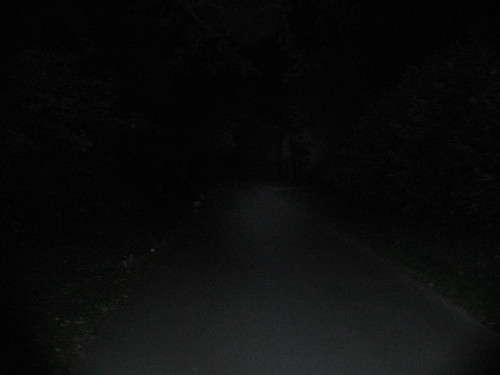 The dereelights and m30 were very similar outputs. spill on the dereelights started 5 meters forward of the torch, spill on the m30 started 2 meters foward of the torch and much larger (approximately double the size at ~20 meters).
there was only a small difference between the dbs mce and sst-50. sst gave about 10 meters more throw at max distance over the mce, could just see things out at about 150 meters. mce version had slightly larger flood but as this starts about 5 meters forwards of the torch it kind of defeats the purpose.
m30 only slightly less bright hotspot than dbs mce due to being much wider and useful spill.
mid levels on the dbs i found too dim, about the same as the 40 lumen level on the fenix. mid level on the m30 was about the same as the turbo level on the fenix rated at 130 lumens, low was about the same as the low on the fenix ~20 lumens.
m30 is the best bike like out of these due to the spacing of the levels and wider spill which lights the road at about 1 meter infront of the front wheel.
wolf eyes was a cavernous wall of light but slightly out thrown by the dbs sst-50 at max distance of about 200 meters.


the wolf eyes is a keeper even at its £300 price which is comparable to other lights of this output but much lighter. its impressively solid, tank like, well made and stubby, no battery rattle, own inbuilt charging circuit, fits well in the hand and is only about 600-700g (im guessing) with the 3x18650. the mid mode is only about 100 lumens less bright than the others on max and should last quite a few hours, im hoping about 10 hours as its only 30% of the max output. as the mid level is quite close to the others max, im guessing the rating of 1950 lumens at max cant be far off.
theres no memory of the last mode and it doents come with anything apart from a nice box and a long string lanyard (which fits through a non-removable metal loop on the back).

m30 is also a keeper, others have described it in detail so i wont. i love the wall of light the spill puts out and the hotspot is still almost a bright as the more focused dbs mce light. its compactness is great too, its the only one i wouldnt mind edc'ing in a rucksack with its extension tube. its the only one that tail stands too (apart from the fenix). theres a bit of battery rattle with the 18650's. a good bike light, finally i dont have to guess the dark road like with the fenix. i dont see any pwm at all but there is a small buzz u can hear close up.

the dbs lights are ok nothing really stood out to blow me away though. the throw on the sst is slightly better than the mce version and the m30 but not by that much, 20 meters maybe at max distance. theres a bit of battery rattle and no strobe. the tint is on the green side for the sst, blue side/neutral for the others. not sure if ill keep the dereelights, the extra thrown is ok but dont know if theyre really worth keeping just for that slight advantage. the fit of the extension tube isnt that great, its a bit fiddly to screw the switch cap on it and initially i found switching between levels not very sensitive.
Last edited: Sep 4, 2010

That wolfeyes is incredible. Clearly brighter than the others.

You're actual experience with the M30 vs. the DBS MC-E isn't shown in the beamshot comparison. Other than the wider flood of the M30, the DBS appears to be much brighter.

Another example of why beamshots don't always reflect what is experienced in person.

Thanks for the great images.
Q

yes, the m30 and dereelights looked roughly the same brightness in real life but the dereelights are putting it all up front making them slightly brighter at the hotspot so i guess the camera could see that better than the spill of the m30.

i find having it all so concentrated upfront didnt really give much useful gain in throw, maybe only 10-20 meters with the sst-50 and comes at the disadvantage that you cant see anything at your feet or the first 4 meter in front of you unless you point the beam there so the dereelights might be returned. i dont know what deree they were thinking with such a low mid and low level either, i might as well just edc the AA fenix instead.

im intrigued by the lack of pwm in the m30 after all the people who say its noticeable, ive been looking really closely on all levels and cant see a thing, had my eyes checked a few months ago and theyre pretty much 20:20. maybe olight have changed it.

While brighter, the WE looks like it has a serious dark ring around the hotspot. Is that true? I thought that was more typical for XRE based lights vs. XPG.
Y

I've been eying a NW MC-E DBS for a big outdoors light (Or an Eagletac M2/M3, or a MG x-thrower, or a Jetbeam M1X, or... too many choices! Augh!), but this review and beamshots makes the M30 look appealing. Does it come in a version with a neutral white tint LED?
Last edited: Sep 3, 2010
Q

yes theres a definite dark ring around the hotspot of the WE, i can see it clearly shining it on the ceiling. it puts out so much light in the rest of the spill and overall that i didnt come in to my attention whilst using it outside.

yowzer, im not aware of other tints. i would definitely take the m30 over the dbs-mce, for the advantages of size, spill and better mid and low levels.
G

I wonder how the throw would compare to a M2XC4?
Q

thanks, missed that typo.

after looking at the spec sheet for the wolfeyes its runtime is quote at 5 hours 10 minutes on its 20% mid level, couldnt find that anywhere else on the net. not sure why the 30% and 50% are given in the manual as these arent available for the r5 superstorm. 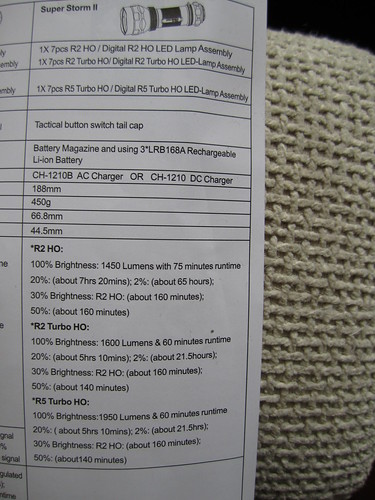 how realistic is the 1950 lumen rating?