Explanation as to why the SC52 quit "early".

I just measured its moonlight L2a current on a mostly-full Eneloop, and it came out at 6.4mA. I recall I measured the SC52w-L2 at about 5.2mA.

Since the SC52 uses significantly more power in its moonlight mode than the SC52w-L2, that explains why it didn't last as long as I expected.

Interestingly, I'd rate the SC52w-L2 to be slightly brighter than the SC52, but of course that's just my eyes, and the different tint might explain the difference in perception. On paper, they're supposed to be the same efficiency, the SC52 using an XML, while the SC52w-L2 using an XML2 (the brighter version cancelled out by the neutral tint binning).

I'm not sure why the SC52 uses a higher current on moonlight. Maybe it's just sample variation. Anyone else have current measurements to share? I've been using Eneloops around 1.31v-1.34v at rest, and I think different voltages would result in different currents, assuming the light is regulated on moonlight (which I'm not sure of).

1.5 days runtime on the 2.5 lumen mode of my SC32 and still going strong. I'm expecting about 4 days at this level, will find out for certain this Saturday as it should cutoff or flicker if that's the case.
W

Today, sometime between 4am and 6am, the SC52w-L2 started flickering. So, that's 352-354 hours, about 14.7 days. That's pretty close to what I would expect, based on the 5.2mA current draw (SC52w-L2) and a 1900mAh (Eneloop) cell. It's a bit shorter, but that's probably because the current goes up as the battery voltage goes down (the flashlight seems to be regulated).

All these durations would probably last 50% longer on an alkaline battery, due to the very low currents being used. I don't want to test that, because I don't trust that an alkaline wouldn't leak when it gets down to 0.85 volts.

Looking forward to seeing others' results.

Awesome. Thanks for doing this!

Great test! Thanks for the effort mate
S

Three days now at the 2.5 lumen setting and it's still going strong.

4.5 days now at the 2.5 lumen setting.. ZL claims 8 days on a 1500mah primary. I'm using a 650mah rcr123 cell which could theoretically give around 4 days max, so I'm guessing the higher voltage means it is more efficient perhaps?

Interesting. You're getting a much longer run time than either of my SC52's, which were a lot different themselves. The current draw of moonlight modes seem to be all over the place.
S

Sitting at 5 days now on the 2.5 lumen level.. Much better runtime than I expected from this mode on a rcr123.

WalkIntoTheLight said:
Interesting. You're getting a much longer run time than either of my SC52's, which were a lot different themselves. The current draw of moonlight modes seem to be all over the place.
Click to expand...

Actually, he's not that much longer yet than your 52w, but you said: "I have placed both on the highest moonlight mode (what ZL calls the 0.34 lumen mode)"

I can't tell for sure, is Swede74 using the same level as you?

WalkIntoTheLight said:
Interesting. You're getting a much longer run time than either of my SC52's, which were a lot different themselves. The current draw of moonlight modes seem to be all over the place.
Click to expand...

Hondo said:
Actually, he's not that much longer yet than your 52w, but you said: "I have placed both on the highest moonlight mode (what ZL calls the 0.34 lumen mode)"

I can't tell for sure, is Swede74 using the same level as you?
Click to expand...

Swede74 said:
I have started my test. I'm using the SC51 as a control. At the moment they look about the same (even though the SC52 is supposed to be brighter - the culprit could be either sample variation, XP-G vs XM-L or middle-aged eyes)
Click to expand...

This is a little offtopic, but I've been thinking about doing an Armytek 90 day moonlight mode test for Tiara A1 and Wizard Pro. Unfortunately it would take whole summer and I think I will be needing the headlamps when camping. Maybe I'll try the 2lm/200h mode test first. Do you have any suggestions when and how I should conduct my test?
R

Here's a comparative moonlight output photo of those lights, and others. The 5 on the left are spec'd between 0.3 and 0.5 lms, and the 2 on the right are fireflies spec'd at 0.05 and 0.02 lms. (It should be noted that the D25A appears unregulated on moonlight) 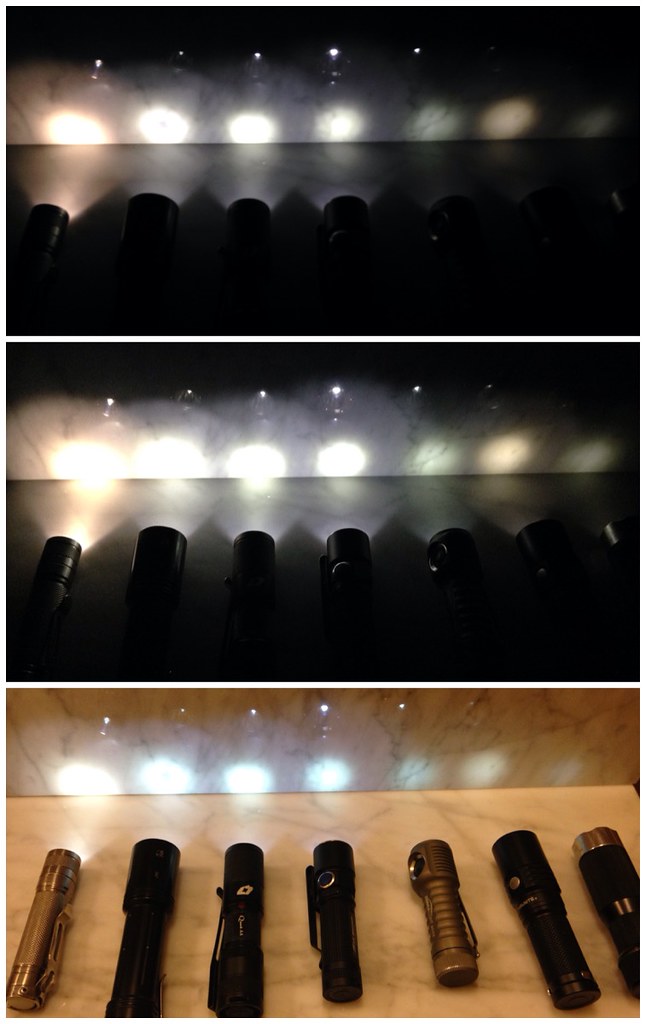 Well light finally shut off today with a resting voltage of 3.4v from my rcr123 battery, lasted a little over 5 days at the 2.5 lumen level. Quite impressive from a 650mah battery, was only expecting 4 days or so at this level.

It was so close...a little while longer and I could have posted this

in good conscience, but it started to flicker just 8 hours shy of 3 weeks, so this

will have to do.

Final result: My Zebralight SC52 lasted 496~498 hours on the 0.34 lumen mode. I should point out again that I suspect the actual output on my sample is lower.

Tailcap current with a fully charged Duracell StayCharged): 5.2 mA (sic) It's the same as WalkIntoTheLight's Sc52w-L2. Since my SC52 ran several days longer, I had expected a lower current draw. :thinking:

Very interesting results... Since the current draw is the same but longer runtime maybe the battery has something to do with it? Or possibly more efficient circuitry?

snowlover91 said:
Since the current draw is the same but longer runtime maybe the battery has something to do with it?
Click to expand...