justanotherguy said:
Maybe... But I have no problem having one of each 
Click to expand...

I hear ya on that one... I have an H53c and H53Fc and can say first-hand that DC-Fix is almost identical to the frosted lens.. but why not own both???

justanotherguy said:
Maybe... But I have no problem having one of each 
Click to expand...

Ha, I get that, and I'm not trying to dissuade you from owning both, but just like being able to customize the tint of my light, the Lee filters also give me a variety of choices for diffusion, from just softening the spot a bit, to full blown flood, and everywhere in between.

Just thought I'd mention it for those who might prefer more control over their beam profile.
J

Got my shipping notice yesterday. According to tracking, I should have my light on Saturday.
W

likethevegetable said:
I hear ya on that one... I have an H53c and H53Fc and can say first-hand that DC-Fix is almost identical to the frosted lens.. but why not own both???
Click to expand...

I have used some home-made diffusion filters for my Zebras. While they work great, and are fairly easy to put on and take off, the extra few seconds of hassle make it a PITA. Also, they're very easy to lose, being so thin and colourless. Far easier to just pick up a frosted light if you want to use it. Or semi-permanently convert one to a frosted version. Either way, you need two identical models.

Just got the new Zebra light SC700d and looks great !! 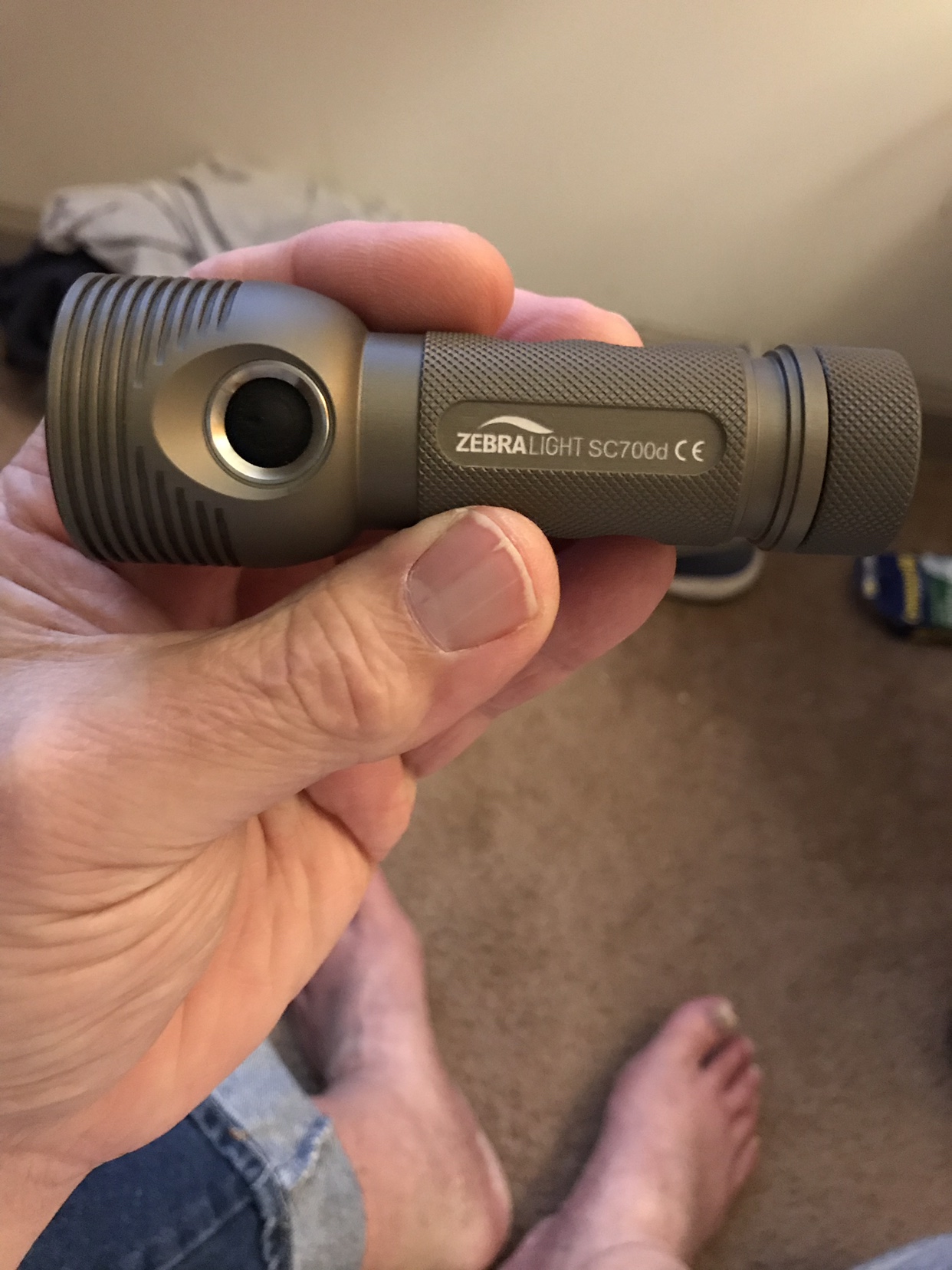 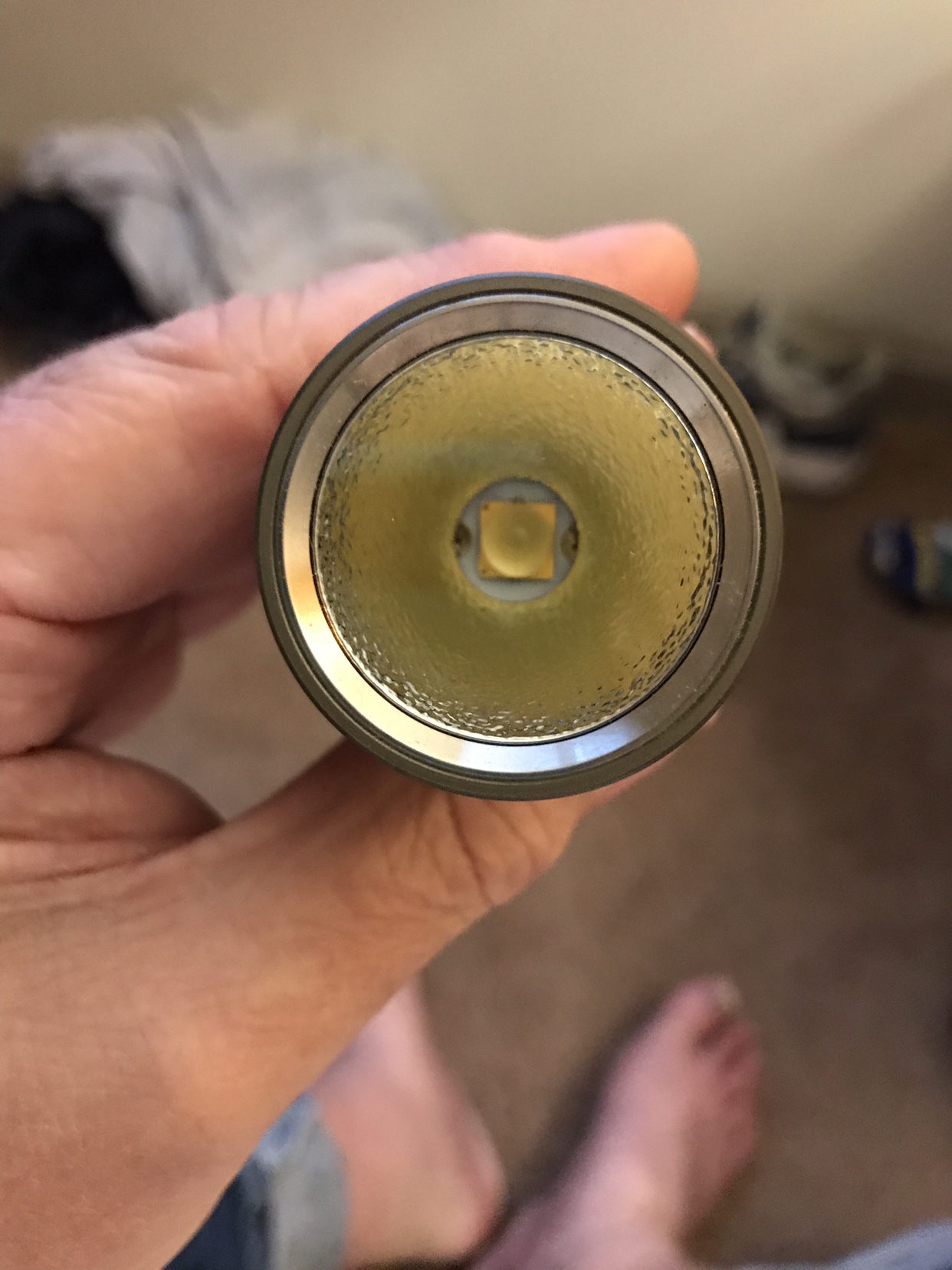 I made a big deal over the anodizing color in the SC700d thread. Post a pic of yours if you get a chance since I'm curious in any variation. Thanks!
T

Damn! Got me all excited! Thought there was a release of something new!

Thanks for the pics! Darn...I was hoping to see a dark gray color. I hope my second one ships soon...the first was such a long wait.


markr6 said:
Thanks for the pics! Darn...I was hoping to see a dark gray color. I hope my second one ships soon...the first was such a long wait.
Click to expand...

Got the neutral white version.


stargaz_21 said:
Got the neutral white version.
Click to expand...

I meant the anodizing on the outside. Zebralights have been a dark gray color lately, but varied depending on the aluminum source. These came out very light/olive. I'm picky
J


stargaz_21 said:
Got the neutral white version.
Click to expand...

There's is only one version, neutral white...
He refers to the physical color of the flashlight body itself....
This is all covered... In the...SC700d thread

WalkIntoTheLight said:
the extra few seconds of hassle make it a PITA....Far easier to just pick up a frosted light if you want to use it
Click to expand...

I remember the old MiniMag came with this rubber hex thing that would hold red or green filters over the end. If there was something like that with a frosted filter, I might use it. These days, of course, with 1000 vs 10 lumens, I have to wonder if the filter or holder would melt.

Got the light last night! Tracking info wasn't updated until it was out for delivery.

Here's a photo of my favorite bit, that massive LED:

Lovely to have the set, and to be able to get the 70 in a tiny light that takes a big battery. It's like an Emisar D4S (same diameter head) that went on a diet.

The color is kinda bad, beam and anodize. The D4S with 4000k XPL has a _lovely_ slightly rosy and warm, but not too yellow, beam. The SC700 has the pukiest of green coronas. The tint is probably a hair to the green of neutral overall. It's not really any worse than my other recent NW ZLs but compared to the Emisar it's quite horrid on a white wall. Walking the neighborhood, I couldn't tell there was a problem. The hotspot is much wider and either one is incredibly bright (3000lm to 4000lm can't really tell especially with the color difference). It does seem like more light comes off the side of the bezel (175-180 degrees) than I'm used to. On high I had to move my hand forward so I didn't get glare in my eyes. I don't remember that from any other flashlights. The larger head vs the SC600 is comfortable. Not sure it's better or worse, but it's fine, and the ability to loaf along at nearly 1000lm is great.

The anodize is "worse" than the SC600 original if you don't like a yellow yellow-green tint. Doesn't seem to show up in this photo, which also includes an old SC60 and SC52. 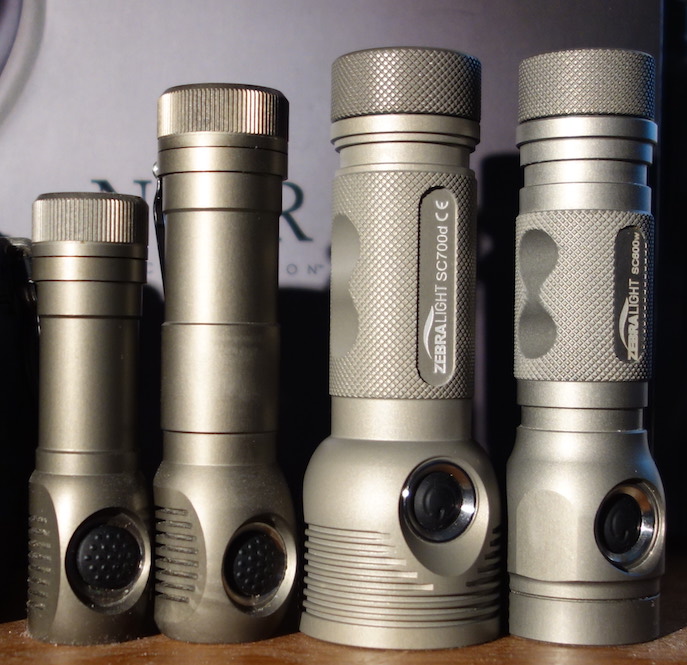 For first playing with it and comparing it, it's a _bit_ of a disappointment, but all in superficial ways. The Emisar D4S in green with teal aux LEDs was much cooler to play with initially, and is still the more impressive looking light.

The huge single LED instead of a quad is, technically, much cooler, though. And then there's this. On high the SC700 draws about 8 amps, about half what the Emisar does. Twice the price, half the current.

It is lower brightness and a higher color temp, but it's still more efficient with better temperature control. Put it on high and ceiling bounce at night and the room just stays lit. It holds a higher steady-state, and even before I adjust it down -5C, you can pick it up without burning your fingers at any point. Just keep your fingers off the head. Outdoors, it gets hot on the highest setting but you don't feel like it's an aluminum shell over a blowtorch flame. It creeps up to hot. Well, it's using half the current, and feels about like that. Other demonstration of how much more advanced it is showed up while measuring current. DMM? 8A. Strap & clamp? 7.5-8A. It has a real driver, not just a FET switch, so the input impedance can be less than that of the LED itself: it's not precariously dependent on contact and battery resistance. It's just so satisfying, as an EE, to see that. The low is lower than the Emisar, too, so it's a better nightlight. Amazing to go from a glow you can put up to your eye comfortably all the way to 3000lm. The Emisar's teal aux LEDs are still a _cooler_ nightlight, though.

There is battery rattle and it's worse with the 40T. The 50E I don't notice it unless I try. Looking forward to what comes next with 21700 cells. Given the 8A peak drain, I'm going to call myself vindicated that the 40T is complete overkill. ~3000 OTF lumens (I trust) off ~32W input power. Amazing.

Nice write up of your first impressions with the new light, radellaf. I concur with your observations. Not just a light to show off, but one that is designed and built to be a worker. Enjoy!

Lovely light. I think this may become a classic.

It was time for this light. It shows we don't need the multi-cell S6330 for big output. But if they bring something like it back or the C3, I won't complain.

You could choose to be helpful and direct a Mod here to merge the threads vs. fussing about it... just a thought.


markr6 said:
I meant the anodizing on the outside. Zebralights have been a dark gray color lately, but varied depending on the aluminum source. These came out very light/olive. I'm picky
Click to expand...

Unfortunately, mine also arrived today in virtually the same color ano as yours. It's markedly lighter than all my other ZL's.
S

radellaf said:
Other demonstration of how much more advanced it is showed up while measuring current. DMM? 8A. Strap & clamp? 7.5-8A.
....Looking forward to what comes next with 21700 cells. Given the 8A peak drain, I'm going to call myself vindicated that the 40T is complete overkill...
Click to expand...

This is an accurately rated, great performing ultra-high capacity 21700 cell. The datasheet lists the minimum capacity at 4753mAh and standard capacity of 4900mAh. The two 50E2’s I tested delivered 5051mAh and 5062mAh at 1A (0.2C) down to 2.5V. The DC internal resistance measured 20.7mOhms and 20.8mOhms. This is astounding consistency and fantastic to see.....This Samsung 50E2 outperforms the (earlier) Samsung 50E, the Samsung 48G, and the LG M50 samples I recently purchased.... I do not know when the 50E2 will be available for sale or who will carry it but I hope it is soon.
Click to expand...