So, I have two PB2 power banks, which I use to power USB devices from 18650s. One older one purchased a long while ago, and a newer one I got recently which is the one that failed. So last night I forgot to take the discharged batteries out of both of them. I wake up, go to charge the batteries and noticed that in the newer one, the batteries were a little overdischarged but still usable. No problem I thought, maybe just a glitch. Then I go to put freshly charged batteries in both and notice that the newer PB2 is sagging down to under 4V output with about 2.1A of current draw. Also, shortly after inserting the batteries, the display dimmed and would do so even more if a device was connected to the output... So then I on a whim sniffed the USB output port and I noticed a smell that was all too familiar... that "burning transistor/chip" smell. So of course, since I can't exactly easily ship stuff while quarantined in my room, I told myself "what the hell" (I was in shock that something like this could happen so quickly to an Xtar product) and used a screwdriver to pry this thing open... After alot of inspection (my eyes kinda aren't great so small things are hard to see) and sniffing (yes, I literally sniffed the board until I found the problem spot when a quick visual inspection yielded little clue) I noticed there is a very very very tiny hole on one of the chips... I took a close up photo to get a better look, and sure enough, this chip blew. What I think happened was a "soft short" developed somewhere inside this thing and that combined with high drain cells (Samsung INR18650-30Q) wreaked havoc and blew a hole in the chip housing. This is highly unusual, especially since I was running this thing within the 2.1A output spec (not to mention there is overcurrent protection, which I as always test when I buy a new power bank of any kind, be it with removable batteries or non-removable. In this case I tested it with 2.57A and it kicked in immediately, shutting everything off.) I don't know what to say, really, aside from being highly annoyed. I love Xtar products (especially the VC4S and VC4L chargers which I use heavily each and every day) so much and it just annoys the hell out of me that chip in a brand new power bank blew up for NO REASON. See picture below. Sorry, I just had to vent. This could have set my dorm room on fire, but I guess I got lucky. 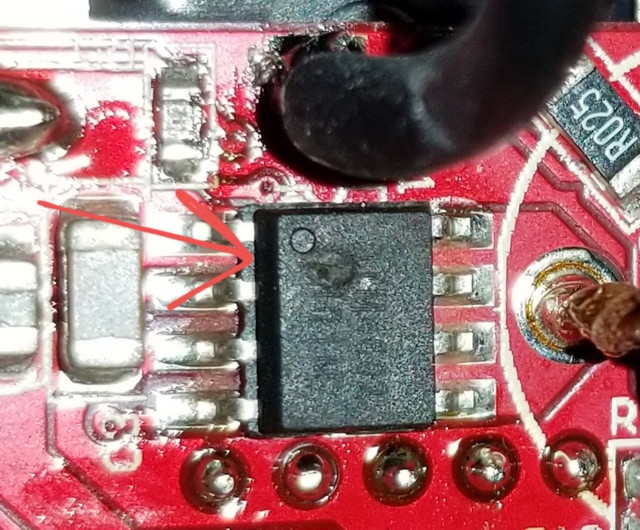 [Up to 50% OFF] XTAR Christmas Promotion