REVIEWER'S NOTE: This is my first round-up review of 2xAA lights, similar in format to my Multi-stage 1AA - Part IV and 1xCR123A/RCR round-ups. In addition to the beamshot, output, throw, and runtime comparisons, scroll down for a detailed description of each light.

All up-close beamshots are at ~0.5 meter from a white wall, to show you the different overall patterns.

Note: although not shown, the Olight I25 has the same reflector and beam pattern as the Olight T25 and ITP C8 above.

As you can see, the Fenix TK20 has a much warmer tint (likely "neutral" Cree 5A tint bin). The other lights are all standard cool white tints. The Olight T25-T is not shown, but looks identical to the regular T25 (same build).

A comment on these beamshots: Obviously, white-wall beamshots at close range don't tell you much about a light's performance in the real world. But it does let you quickly compare the beam profiles of a large number of lights at a glance. If you are familiar with any of the lights shown above, then you can quickly see how the other lights are likely to stack up against it. And that is the point here - it would be great to have outdoor pics for each light, in different environments, at multiple distances in each environment, and with different exposures to show beam vs spill for each distance, etc., etc. ... but I won't be doing them.

As you can see, some lights are capable of much lower minimum outputs than others. There is also a lot different in throw (i.e. how focused the light is for centre beam. Scroll down for runtime comparisons.

For the lights that have a continuously-variable interface, I have presented their ramping sequences above. The JetBeam Jet-I PRO EX V2 has a longer ramp than the Nitecore D20 (or D10, shown for reference) and ITP C8.

A comment on these graphs: It should go without saying, but there is a lot more to a light's performance than its runtime! I've tried to give some context for each light's overall performance and value in the detailed discussions at the end of the review. The purpose of these graphs is to simply let you quickly compare output/runtime at a glance.

Note also that a number of these lights can go to lower outputs than the mid-range levels presented below. But I don't do runtimes on low levels on NiMH due to the risk of damaging the cells from over-discharge (i.e. I can't estimate termination time to stop the run before complete discharge - and potential damage - occurs to the cells). 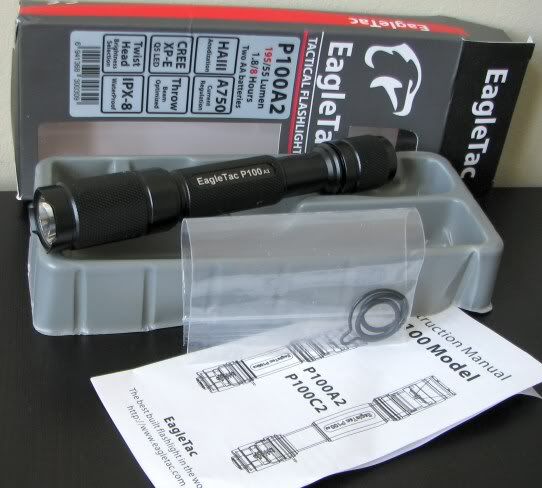 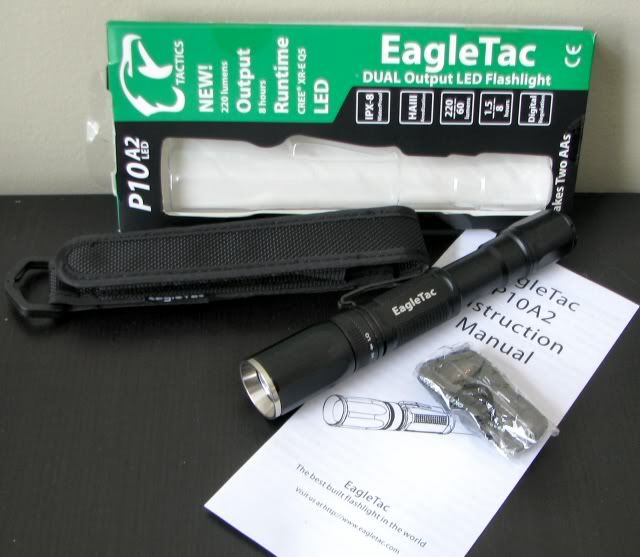 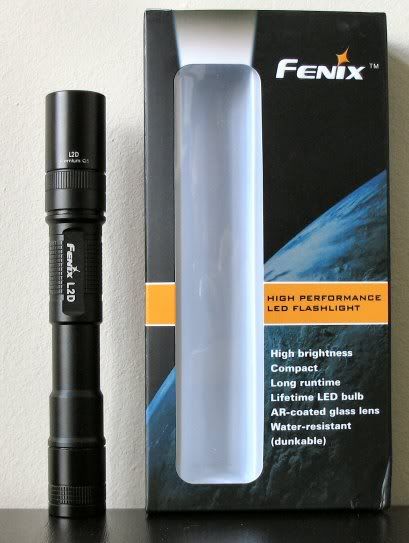 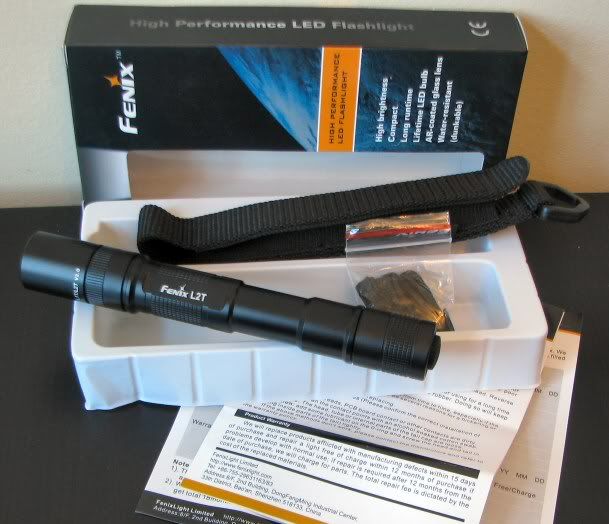 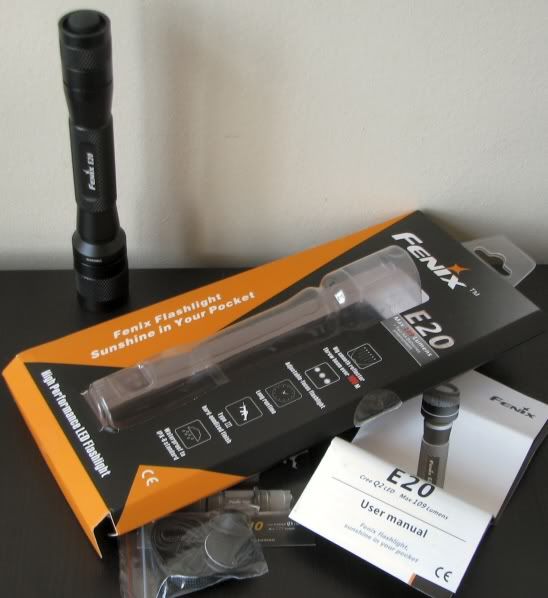 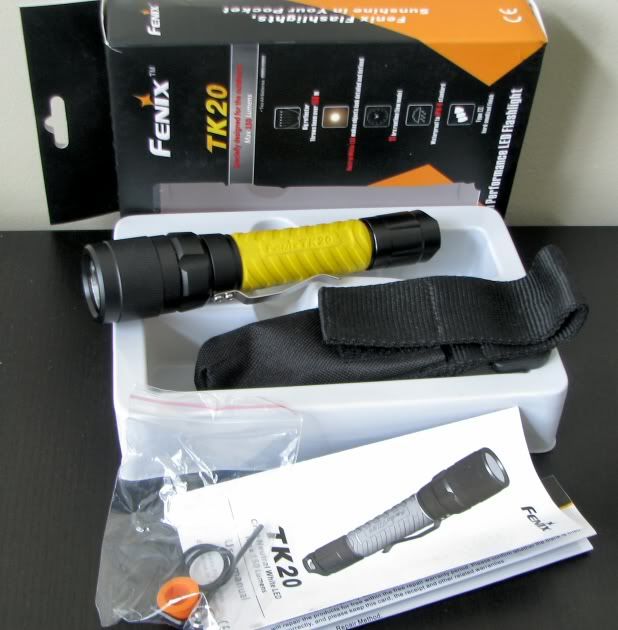 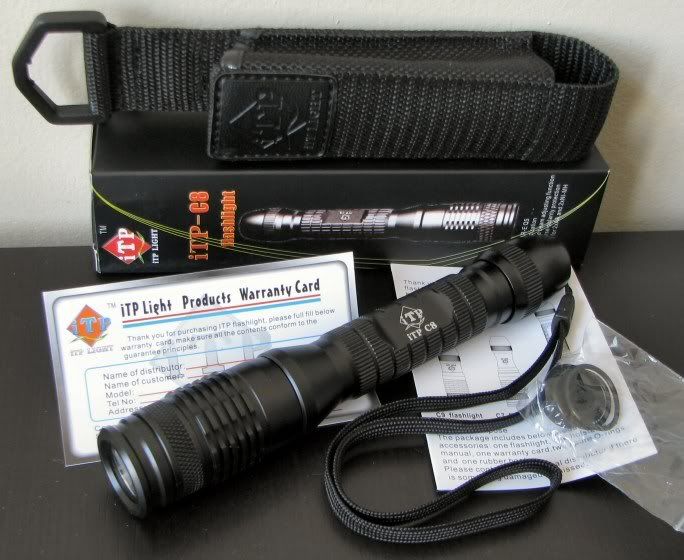 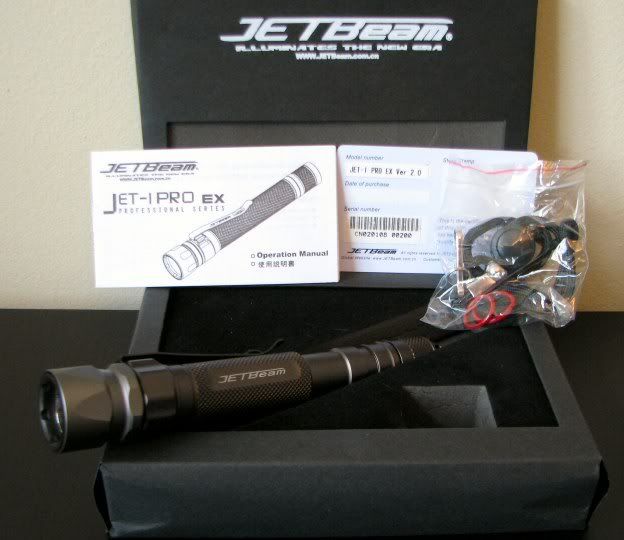 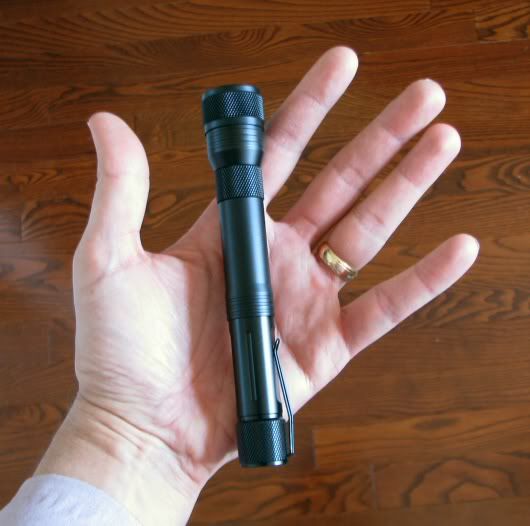 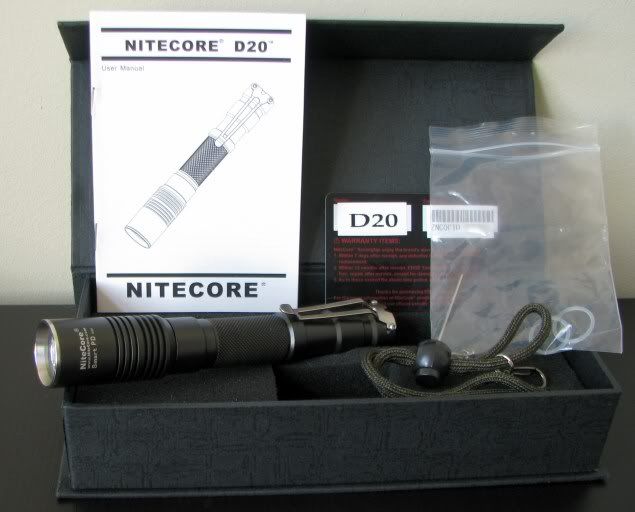 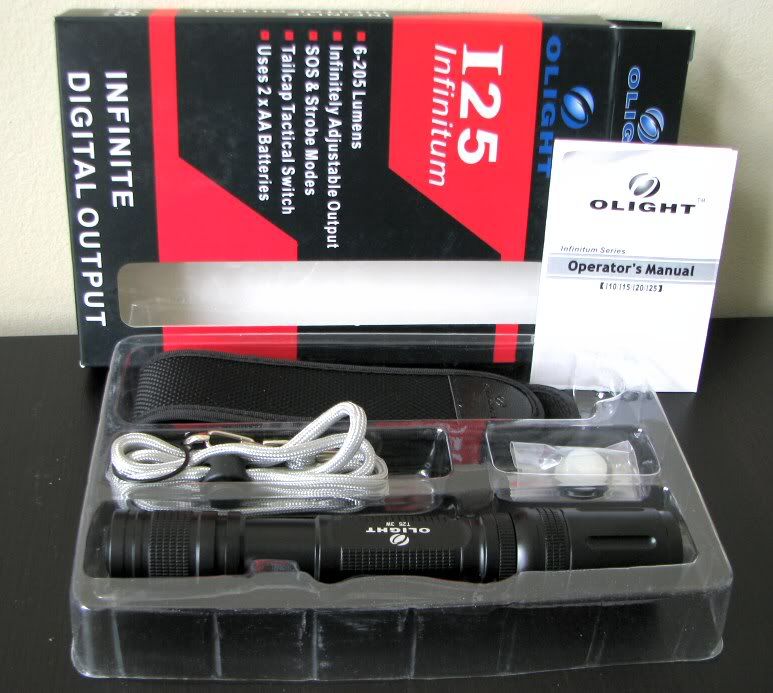 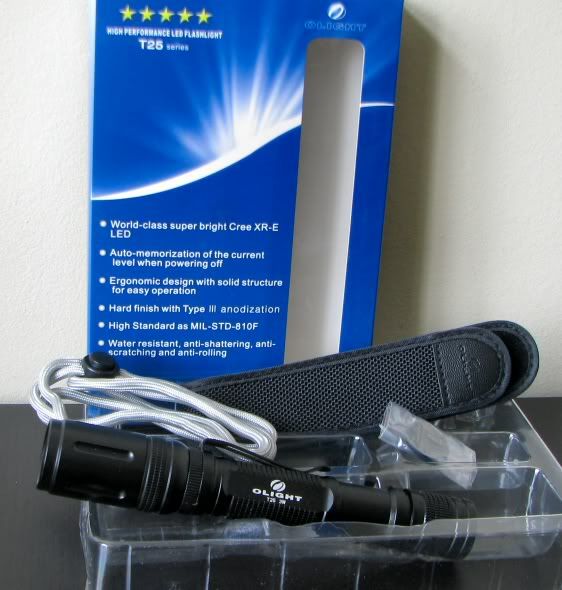 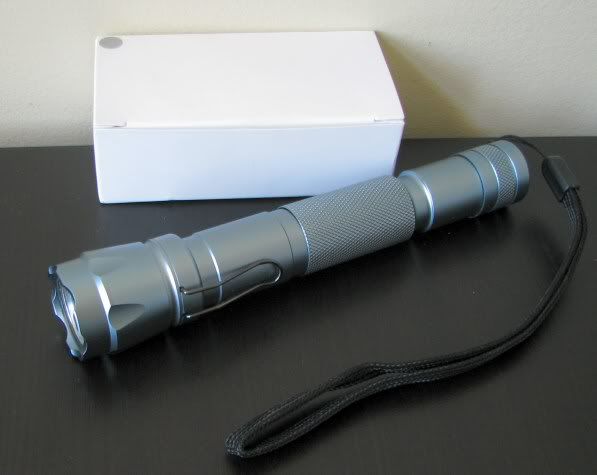 I'm a big fan of the 2AA series of lights - my first "real" LED was the Fenix L2T (Luxeon III model). I still consider this one of the best form-factors for non-flashaholics, as it has the best combination of output, runtime, and easy battery availability. It's nice to see all the new entries in this space, including the development of more tactical-style lights.

As always, please don't ask me to pick the "best" light of this class. It all comes down to what you want to use the light for (and how much you are willing to pay for it ).

There are a few stand-outs. For a slim-lined light with the best output runtime efficiency, it's hard to beat the Fenix L2D. For non-flashaholics, or those with a preference for a straight-forward interface on a budget, the Eagletac P100A2, Fenix L2T V2.0 and ITP C8 (especially the Tactical version) stand out in my mind. And the Romisen RC-N3 II is a very good "budget light" choice - performance and build were surprisingly good for the price. For the tactical crowd, the Olight I25 & T25-T, Eagletac P100A2/P10A2, Nitecore D20 and Fenix TK20 are all strong contenders - depending on what features most matter to you.

We have definitely come a long way from the original 2AA minimag incandescent most of us started out with. :candle: Although I haven't covered them here, there are a lot of LED upgrades possible for this classic light (e.g. Terralux drop-ins, etc.), as well as the official minimag-LED Luxeon and newer Rebel version. Those who like a single-stage light might want to check out the budget Fenix E20 for a brighter modern equivalent.

On a final note, it's important to acknowledge that most of the world still uses alkalines in 2AA lights. :sigh: For those in-the-know, the new generation of low self-discharge (LSD) NiMH batteries are a wondrous innovation. These are available under the Sanyo Eneloop and Rayovac Hybrid brands, as well as re-badged under a number of well-known names (most notable Duracell "pre-charged", but also available from Kodak, Sony, etc.). I strongly urge those still using alkalines to make the switch (the "Flashlight Electronic - Batteries Included" forum can provide a lot more info). But for those sticking with alkalines, I think you've find Fenix/Eagletac remains your best choices for output/runtime performance.

FYI, although I haven't "officially" updated this thread in a while, I have continued adding new runtimes and beamshots to the stock photos in the main review. Here are are some full reviews of lights that have been added to the comparison graphs and tables:

And a few more recent ones that haven't been added to the tables/graphs yet:

wow amazing review. thanks!
Why is the jetbeams beam so oogly?

always wondered how the T25 would stack up against others

. I have L2D and T25T, and (according to this review), I see that it was good choice to buy them

.
I am looking forward to your next great work. Your work is helpful for lot of people to decide, which flashlight to buy - and be happy with it. The same for me. Your work is very creditable. Thanks again.

Ah! more lights that I'll never get to use to drool over!

Thanks for the reviews, man!

A tour de force - superb work! This is surely going to be the definitive review for this class of light, and must now be the first stop for all those who ask for advice. Many thanks for this excellent reference thread!

Moving it to the Review section.

A super and very useful 2xAA round up!:twothumbs This has got to be one of the best ever reviews.

Thanks for the excellent work as usual SB.

Thanks a lot:twothumbs, excellent review for those popular 2AA lights, very informative:thumbsup:.

The 2AA Ultrafire WF-606A is one of the most solid budget lights and it would be cool if you could include it sometime.
Last edited: Dec 4, 2008

:grouphug: Thanks for the support everyone. It certainly was a monster review to pull together. :sweat: But I thought it was important to compile in one place all the lights, including some I haven't reviewed individually before (e.g. Eagletac P10A, Olight T25, Fenix TK20).


sol-leks said:
Why is the jetbeams beam so oogly?
Click to expand...

Well, part of the issue may just be it's not too pretty up-close on a wall. The early IBS lights tended to have noticeable "dimples" along the spillbeam margin, due to the retaining ring divots. I'm happy to note this is no longer the case on the newer lights (e.g. Jet-III M, ST, etc.).

My Jet-I PRO EX V2 sample also just happens to have a bit of a purplish tint, which isn't very appealing next to the warm-tint L2D in the lineup. In real life, I've found it to be fine.


swrdply400mrelay said:
always wondered how the T25 would stack up against others
Click to expand...

Yeah, I've been meaning to get those runtimes done for awhile.

I should re-iterate though that this is the regular version - I would expect the tactical version to have a higher max output (with likely similar overall output/runtime efficiency).


chanamasala said:
The 2AA Ultrafire WF-606A is one of the most solid budget lights and it would be cool if you could include it sometime.
Click to expand...

Haven't seen that one, thanks for the heads-up. I've included a few other Ultrafires in some of my earlier round-ups (especially the budget single-stage ones), but have found the quality to be inconsistent. For ex., I believe Ultrafires are actually manufactured under license by a number of different factories working from the same specs - but the finished producs can vary widely (not to mention all the potential counterfeit ones). Makes it frustrating as a reviewer - you do all the work to present a light, and the next batch sold is considerably different in build or circuit performance.

Worse still, people may have bought the light based on the info in my review - and then receive something quite different. This is why my Ultrafire C3 samples with 2AA extension tube didn't make it into this review (you can see its own stand-alone review here, and the saga than unfolded throughout the thread as more specimens came out). It's kind of like reviewing a ping-pong ball - you're never sure where it's going to wind up! :ironic:

But I agree it's important to look at these, to help separate out the better choices. And bessiebenny does a great job in his massive budget round-up thread. :thumbsup:
Last edited: Dec 5, 2008
K

Thanks Selfbuilt, your timing couldn't be more perfect. Based on your review I think I've found the perfect AA light for my daughter

Any plans to test the T25 on alkalines?


So much work. So much useful & valuable data and information.

Thank you again for such fantastic work selfbuilt. Your roundup reviews are the best reviews ever. Directly comparing a bunch of lights in the same class is much more informative than individual reviews. Those comparitive output/runtime graphs are the most useful data in any review. I was a huge fan of FlashlightReviews and your comparison reviews are the only ones that top his. Bravo.

I was anxiously waiting for it...

And I loved this part in special:
"Fenix TK20 is a 2-stage light with warm "neutral" Cree tint bin (likely Q2-5A). Runtimes are as expected for a Q2 light. Note that this is the best thrower in the collection, due to its larger head/reflector."

Another invaluable review. Thanks for taking the time to do this and other reviews.

wow! this is not mean feat...thanks for another splendid review...