A look at a couple of the new NovaTacs

I've been a long time lurker here, so I figure it's about time I get off my butt and contribute something.

I've always loved collecting things, flashlights not being among the least. I have a ways to go before I enter the realm of some of you folks here, but my wife says I'm off to a good start. Around 10 years ago, I would've put my set of Maglites up against anyone's and I thought that was all there was...Then came a Christmas Day when my brother-in-law presented me with a Surefire Z2 Combatlight and overnight my shiny, colorful aluminum cylinders became paperweights. I worked my way through most of the SF incan's (LEDs weren't really doing much then) and then I picked up a NovaTac 120P which has been my EDC for quite a few years. I followed all the threads here about the "new 2008" models to be released...and I waited...and waited.

In the meantime, I tried a few of this and a few of that, but always came back to my 120P. I even picked up a couple of little brothers (85Ps) for it along the way. I love the beam and the fact that it's been through everything short of a blender and it stills works like new.

Finally I see a few new models coming available and picked up a couple. I thought I'd do a quick walk through for those interested. As always, the following are my opinions and observations only, YMMV... 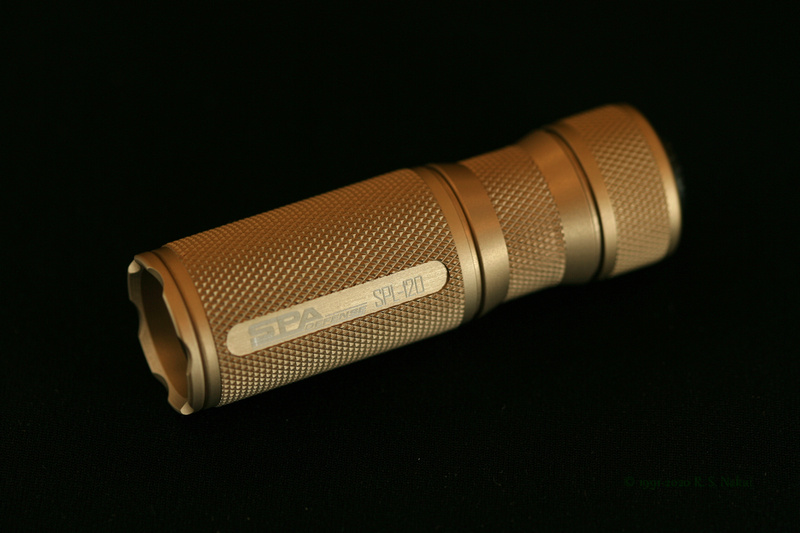 I found this on ebay for $59.95 with free shipping. From SPA's website it looked to be a 120T in a desert tan disguise, so I figured I'd find out. It came with a weapon mount, IR filter, and an extra tailcap that has both a small tactical clickie and remote tape switch. Heck of a deal if you ask me.

Second, a NovaTac 120M from an online retailer. 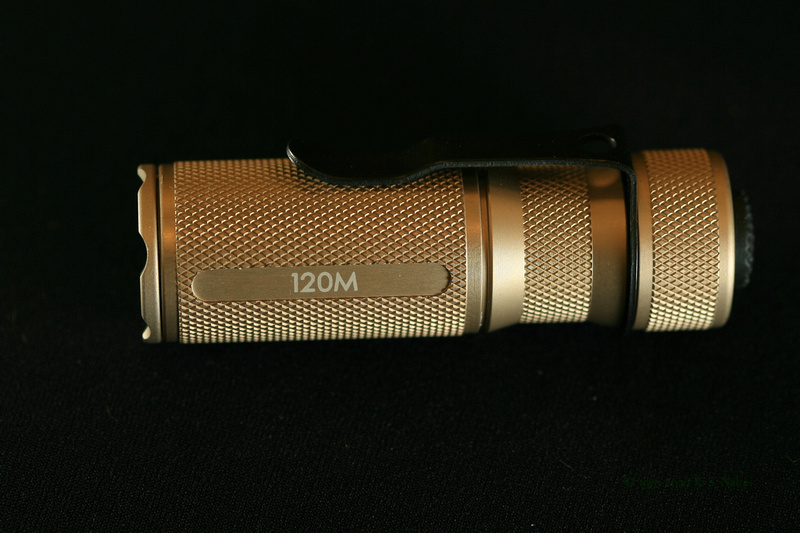 The first thing I noticed was that these are lighter in color than the pics I could find online, and while I would've preferred a darker shade, they still look very nice. Also, the bezels are the same color as the bodies. I was worried that they were not stainless, but after taking them off, they feel like stainless, although I'm not sure how they get their color. Maybe someone in the know can verify this for me.

The second thing I noticed was that the knurling is different, both from each other, and from my older models. The 120M is a more aggressive than my 120P, and the SPL-120 is quite a bit more so. 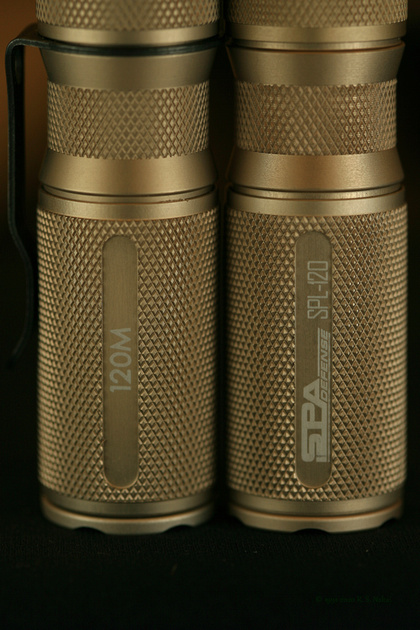 and here's the old next to the new: 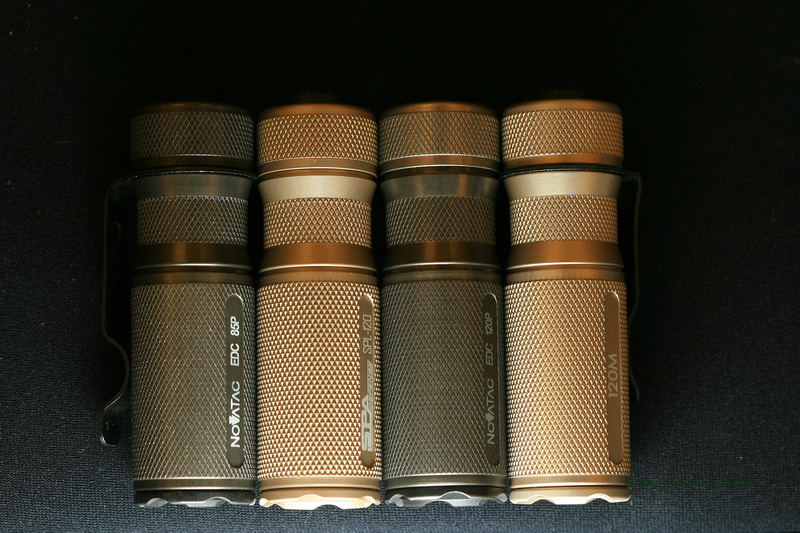 I tried to get the light at an angle to show the difference in the knurling. As you can see, the original NTs are much smoother, though still effective.

All 4 of these are "Made in the USA", but interestingly enough, only the SPL is so marked. 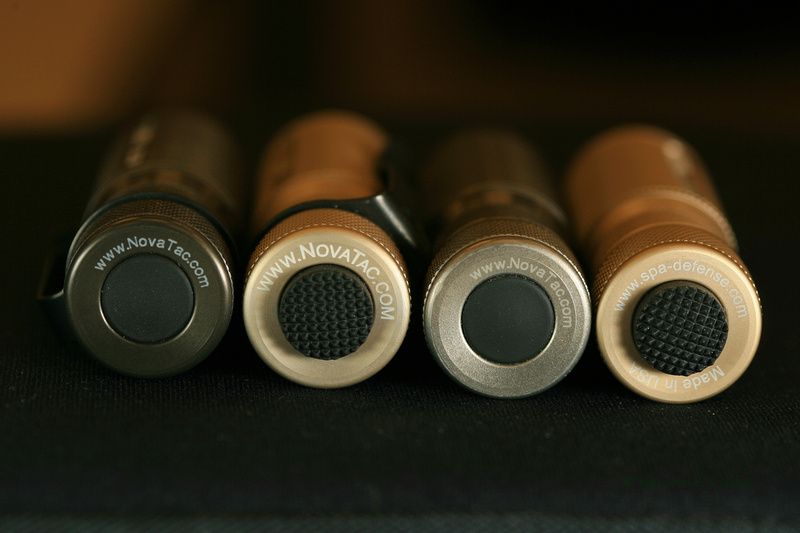 In fact, I couldn't find anything on the packaging of the 120M as to its' origin.

One thing I was worried about was the possible decline of NTs QC with the new models. From what I can tell after a day or two, it doesn't look like I'll have anything to complain about. I guess only time will tell.

One area that my old NTs suffered in was the consistency of the anodizing. As you can see below, on one of my 85Ps it was spotty, and the tailcap of my 120P was several shades lighter than the body. 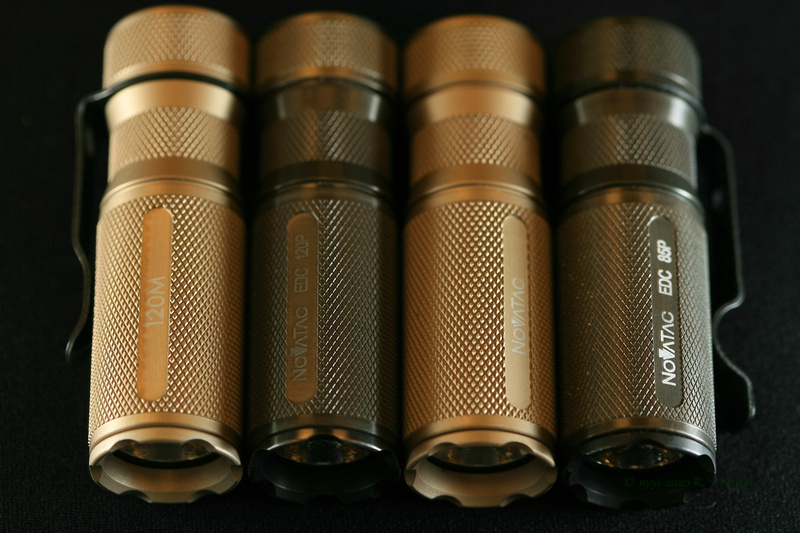 On both of my new lights, the anodizing and the color consistency looks perfect to me.

There are also some changes/improvements? on the inside as well. Below you can see the differences in tailcaps, springs, contacts, etc. 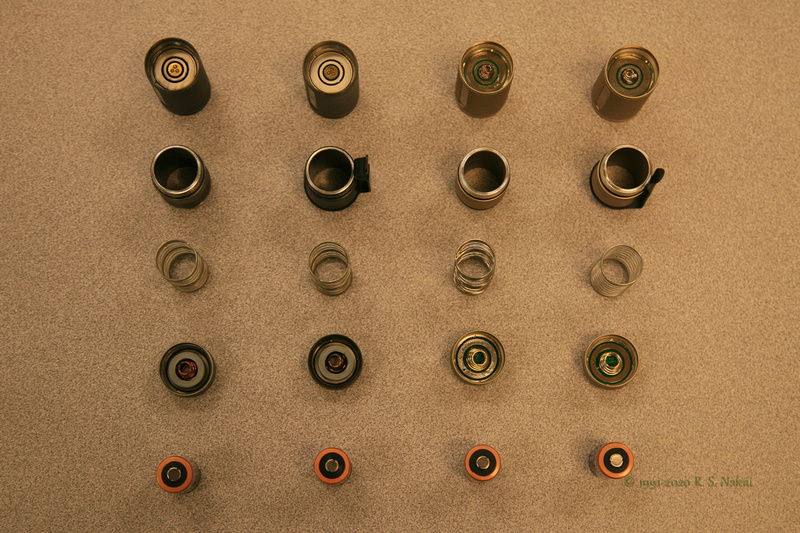 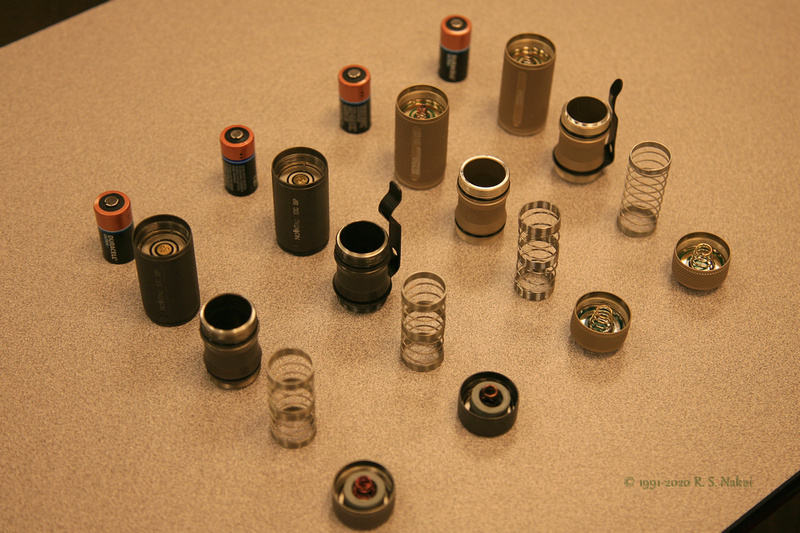 I know y'all always want beamshots, and all I can say is this: I hadn't tried shooting any before, and to give a fair and accurate representation, I'm going to need a little more time and preparation.

However, just from my untrained eyes;
120P - perfect beam, smooth transition from hotspot to spill, no anomolies, and a very white tint.
85P - same perfect beam, with a very slight green tint.
120M - same as 120P
SPL-120 - slight out of round hotspot and a more pronounced greenish tint.

Now I probably sound like a NovaTac fan, and I am. My 120P has been used and abused, and has never given me a problem, and like they say, "If it ain't broke, don't fix it". That being said, I have read many great things about the Ra's. If the NT didn't fit my hand so well, I'd probably already have one of those beauties...I guess there's always next year...

To be fair to the other brands, I still like my SF's, and I tried a Quark MiNi123 and liked it so much that I got a bunch for stocking stuffers this year and they were very well received.


Anyhoo...thanks for stopping by, and here's a last shot of the boys (missing in action is one of the 85Ps). 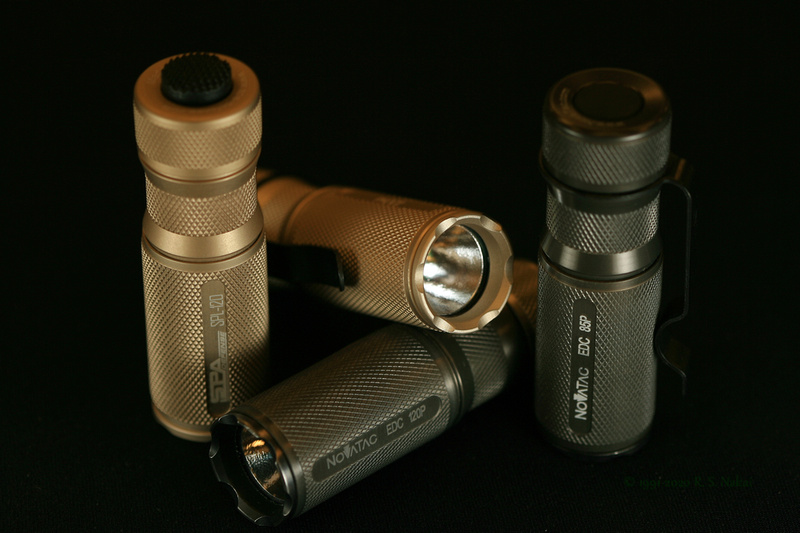 Have a Safe and Happy New Year,
Rich
F

Thanks for the great pictures Lost H! :welcome:

I'm a fan of Henry's lights too but can't help thinking that NovaTac are going around in circles, nothing really new since Henry left.

:welcome: Wonderful 1st post. The photos are great- I think the more aggressive knurling will be a plus. I have all 3 versions of the NT's and they remain my favorites- The SPL is a great deal for that price- hope I can find it!

Thanks for posting the stunning photos. (The copyright notice in the lower right hand corner of each photo is 2008, so you might want to update the notice if the photos were taken in 2009.)

Wow - great post Rich! You have quite the skill with a camera.

I love my NovaTacs (120P, 120E Cracked). Now I'm going to have to pick up another in Desert tan thanks to you! Then, it will be time to begin the NT modding... :devil:

Thanks for the rundown on these lights. I've not seen much about them before so this was a nice introduction to NovaTac for me!

Excellent photos and breakdown. Thank you for the info.

Hard to add to Henry's design without Henry....

I like my NT 85, and my Ra 170. Great runtimes, beams, and customization options. Tough suckers too.

Thanks for posting the stunning photos. (The copyright notice in the lower right hand corner of each photo is 2008, so you might want to update the notice if the photos were taken in 2009.)


LOL! I was wondering if anybody would notice. My site automatically adds the watermark, and I didn't notice until after I had finished my post. I was hoping it would go unnoticed, but you caught me!

Thanks for the warm welcome everybody,

Krotchitty said:
Hard to add to Henry's design without Henry....
Click to expand...

wow, these are all over the board price wise. Whats up with that?

I am seeing some well over $130 for the new ones. Is this vendors taking advantage of the confusing and complex number of models out there now ?:shrug:

Liteskr42 said:
wow, these are all over the board price wise. Whats up with that?
Click to expand...


I've noticed the same thing, and I do think a lot of it comes from the fact that there are several different models and NovaTac has not made any effort to update their website.

From what I've read, this is roughly the new lineup: (this is all from what I've been able to find online, and may not be 100% accurate)

Storm
1xCR123
Classic
2xAA
Special Ops
2xCR123
Wichita
1xCR123
The models that are sourced from overseas are listed as Type II anodized whereas the US models are all Type III. From what I see, the price point for all these are well under $100.

I don't think the last 2 are to be released until next month, but I've seen all the others in stock at YCS (where I purchased my 120M).
I just looked on ebay and there are only 2 SPLs listed. I think most folks don't know what they are. A month ago when I purchased mine, there had to have been at least a dozen listed, most at ~$69 BIN prices. Most of them did not sell. I was the only bidder on mine.

I'm hoping as they come available we'll see some reviews of the other models.

Wow that's quite a steal on the SPA 120! Great comparison.:welcome:

I't a programmable 120 Military with better knurling and weapon accessories!

It's the one I got :naughty: for a not-so-good deal but still less than the unattainable Military 120.

Only one picture, and not a whole lot of information...

hope this guy is legit, I might have to buy... :green:

They´re beautiful!! I love those "gold" ones.

What kind of LED does it have inside ??

Where can I buy one?

Are the new lights compatible with old lights, ie, can I put the head and tail of an old light on a new body? I'm assuming the answer would be yes but it would be nice to know for sure.

I'm interested in getting one of the new Classic models to have a 2xAA Novatac and would like to be able to use the new body on my old parts should the new parts ever fail for any reason.

W
Did the Surefire Sidekick get a revision at some point?

B
What Is The Purpose Of A 12 AA Cell Large Flashlight ??

Jan 25, 2023
hsa
H
A
MT3-18350-Titanium-Add the auxiliary light of seven-color flowing water.（The price of stonewashed and titanium primary colors are the same）

Maglite came out with a new tactical light
2 3