HDS Amber in the Fog

We have had several days in a row of foggy nites. I have found out that the HDS amber cuts thru the fog with less "flashback" than conventional "white" led lights. If you use your lights in the fog a lot, consider a Amber HDS. That is the post.
D

I've heard of lower CCT light "cutting" through fog more effectively, with Rayleigh scattering being the explanation. I wonder how much truth there is to that.

Also a lot of automobile fog lights are amber too, so it is definitely plausible.

I hope Gene at Malkoff does a GB with Dot on an Amber soon !.

If its the same emitter as the HDS, I highly recommend.

what is the HDS Amber Emitter PSM?
thanks!

This (LIMITED) LED produces amber light that is optimum for not attracting flying pests. Typical maximum output is 250mW at 595nm.

Not sure on exact emitter, it is probably buried in the amber thread. 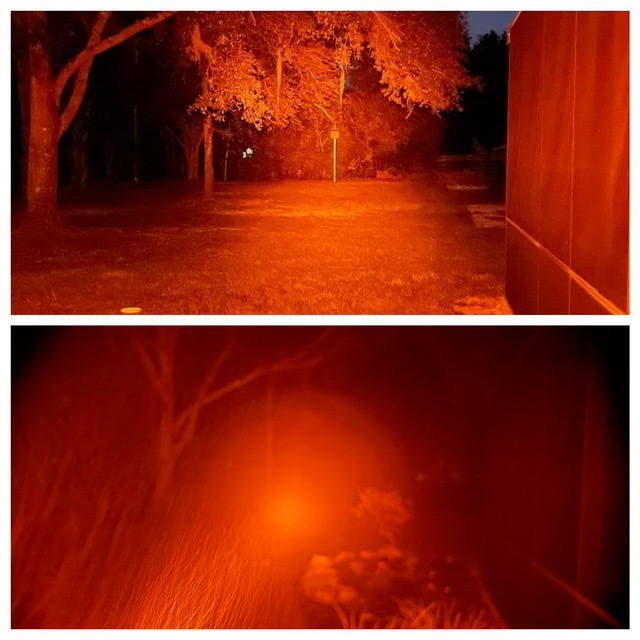 Duster1671 said:
I've heard of lower CCT light "cutting" through fog more effectively, with Rayleigh scattering being the explanation. I wonder how much truth there is to that.
Click to expand...

What you heard *isn't* true. No color of light "cuts through" fog more effectively than another, as Rayleigh scattering involves molecules orders of magnitude smaller than the water droplets in fog.

found a dispersion calculator, it seems that for the size of the fog, yellow-green light is scattered least of all, but only if the fog is made of silicon, copper, gold or silver spheres, if I didn't get it wrong))

Incandescent is still probably the best for this kind of work.

Mie scattering applies to fog and clouds-- you'll notice clouds look various shades of grey or white, and the backscatter you get from white light in the fog is still white. (And with that scattering, a larger portion is scattered forward, not back, as it passes through the water droplet itself like a lens.) The reason clouds can appear orange/red in the sunset or sunrise is from the Rayleigh scattering through the longer atmospheric path the sun's rays take at sunrise.

As far as fog penetration, there is the concept of the "extinction coefficient" of light, and it has been studied to some extent with light between 360 (UV-A) and 2490nm (in the near infrared). It's been some time since I've read of the research, but generally speaking, the size of the water droplets in fog is such that the visible light spectrum will be equally scattered and have equal penetration. Really, the biggest problem with the backscatter in fog is how our own eyes deal with it. In fact, absent yellow fog lamps or yellow headlamps, wearing selective yellow glasses will have the same effect as using a yellow light source. It doesn't matter where in the 'chain' the yellow is blocked-- at the forward lighting or windshield or right at your eyes, you're reducing the "blue light load" on your eyes.
D

Thank you for clarifying re: Rayleigh scattering, Alaric.

"I heard a thing that sounds kind of plausible, so let's repeat it online" is one of the ways misinformation spreads.

The LED should be a XP-E2 Amber. The "Amber" Version has a very narrow spectrum, the "PC Amber" not.
Hoho stated that the Amber LED for the HDS was the deepest Amber.

Angle of the beam can make a difference. It's why fog lights on automobiles and trucks are more effective below the eyes (on the bumper) or above the eyes (on the roof). Example is hold the light over your head or down by your waste instead of beside your head so less light is seemingly reflected back at your eyes.
Last edited: Dec 10, 2021
D

I actually watched a video on YouTube where a guy tested a bunch of different car fog lights and in his testing, amber did in fact lose less light, but it was a small percentage difference and the white lights still got more light down range because they started off with more light. Cutting light output to lose less light output kind of defeats the purpose.

Aim is definitely your greatest ally with fog, but there is validity to warmer lights being better. You're literally having a light shining into your eyes and whether it's reflective particles or somebody else's headlights, warmer lights feel less harsh.

Well, I was looking forward to reason to purchase the Amber.

It is awesome man, I like it a lot more than I thought I would.
D

RCS1300 said:
Well, I was looking forward to reason to purchase the Amber.
Click to expand...

I used to be really into colored lighting, but as the years went on, honestly, all of the claims and myths were proved false or in this case, negligible. It's a bit disappointing honestly, but 99% of the time, white really is your best bet.

Colored lights are still fun though....

defloyd77 said:
it was a small percentage difference and the white lights still got more light down range because they started off with more light. Cutting light output to lose less light output kind of defeats the purpose.
Click to expand...

But do you want more light where a chunk of which is harder for you to see by, or slightly less light but it's easier to see by?

Aim is definitely your greatest ally with fog, but there is validity to warmer lights being better. You're literally having a light shining into your eyes and whether it's reflective particles or somebody else's headlights, warmer lights feel less harsh.
Click to expand...

L
Help with HDS sent in for service

HDS Be On the Lookout for...