Hello gents, it has been a year or two since I last posted. I started on CP forums due to my USGI military searchlight a decade ago. (It is still sitting in my driveway, but I digress.......)
Anyway, a handful of years ago I bought a pair of JW Speaker TS4000s. At that time I think they were among the brightest OFF-ROAD lights going. I drive a lot across the desert, and up in the mountains, so....why not! Buy once, cry once, right?

Several months ago, the meth-heads that live behind my house backed into my vehicle (and for whatever reason failed to tell me). The impact pushed the front light mount bar (homemade) into the front bumper, which took out the fender, which took out the AC condenser, etc......
I discovered one of the lights worked, the other did not. Upon further inspection, I found the impact pushed the one light back into a piece of bumper trim, forcing the "Deutsch" connector (I think that is what they are called) to push the two prongs inside the light housing into to housing. I could shake the light and hear it rattling around inside. (Oddly, the lens was not damaged at all!)
I called JW Speaker and spoke with one of their CS people. They said those are sealed units, and could/would not open it up. That wasn't the answer I wanted to hear.

So, with a new pair ordered by the body shop after the $5000 (!!!) in front end repairs, and a delivery time in early November, I figured I have nothing to lose by trying my hand at it. I carefully took a knife blade and got in between the lens and the housing, very slowly prying the lens away. after an hour, I finally made some headway. Then, I wa sable to put two small flat bladed screwdrivers next to each other, and slowly walk around the edge until it broke loose ( not in a bad way). Once I had it opened, I could disassemble the individual lenses and the reflector housing inside. Sure enough, I found the broken "terminal" and where it was pushed out of it proper location. I am heading to a local electrical/electronics supply house here in town, as my brother who works on stuff like this for a living says that might be a standard part. If so, fine. If not, I can make a small plate to hold it in place.

No luck at the electronic/electrical supply house. I made a tiny piece to hold the broken terminal in. Soldered back together and
IT
WORKS!!!!

Any pics of the internals? I had considered a set of the 4000's several years ago, but ended up going with a set of LED Cibie Super Oscars instead.
B

Sadly, no. (And even if I had saved any, I have absolutely zero luck posting pictures on any forum I frequent.) I will say the guts in those are extremely well built.
B 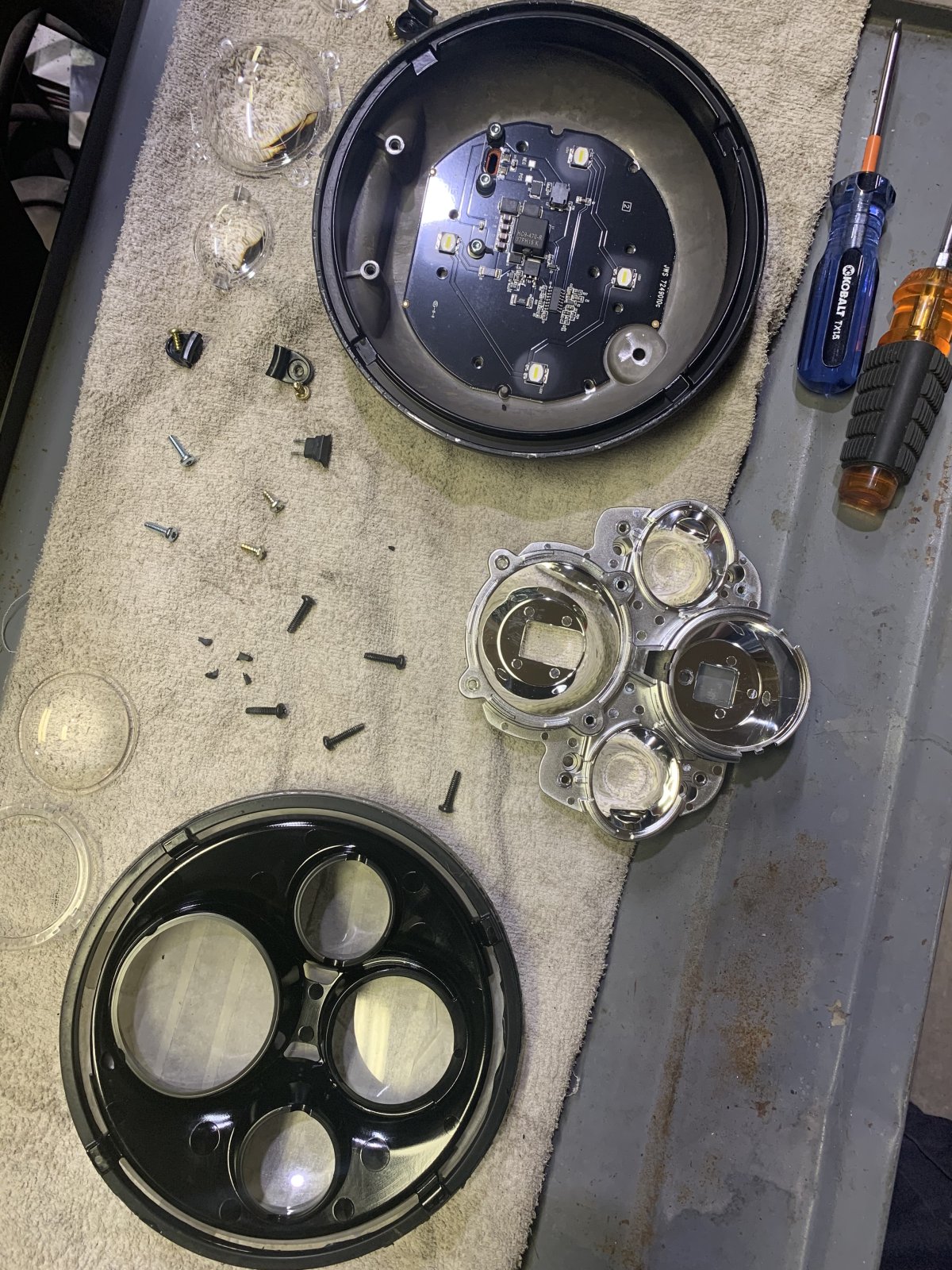 I found a picture, and gimmie a break, this is the first time in my pathetic life I was able to load anything. I don't know why there are two of the same shot. If you look closely, you can see two screws in the upper left corner of the circuit board and barely see an orange seal in between the two screws. At about 7 o'clock from the housing about 1 1/2" away- the twin pin connector that was broken off is seen. When the other guys vehicle hit mine, somewhere in the impact, the light was shoved back into my bumper, pushing the connector inside and breaking the two pin part. (Difficult to explain!) The two pin piece is supposed to be in between the two screws on the circuit board. I made a small piece of polymer/plastic , drilling two holes to place in between those two screws, holding the terminal back in place. After placing it back where it was, and CAREFULLY soldering and supergluing things together, it worked like new! I used black rtv sealant to put the lens back on, and I am back in business.

Interesting way to end up with a broken lamp for sure. Glad you were able to repair it and restore the function. I've bought 6 or 7 blatant copies of jw speakers lamps off of ebay and amazon, and they have all been somewhat true to the original, but made with much cheaper components and generally much lower output/quality LEDs, and they skimp out on things like those deutche connectors for pigtails with cheap plugs. None have been sealed worth a damn either, ymmv.
You must log in or register to reply here.
Share:
Facebook Twitter Reddit Pinterest Tumblr WhatsApp Email Share Link