I received the XTAR R30 1200 directly from XTAR for the review.
For technical details and to purchase: https://www.xtar.cc/product/XTAR-R30-1200-Sports-Flashlight-172.html(link is external) 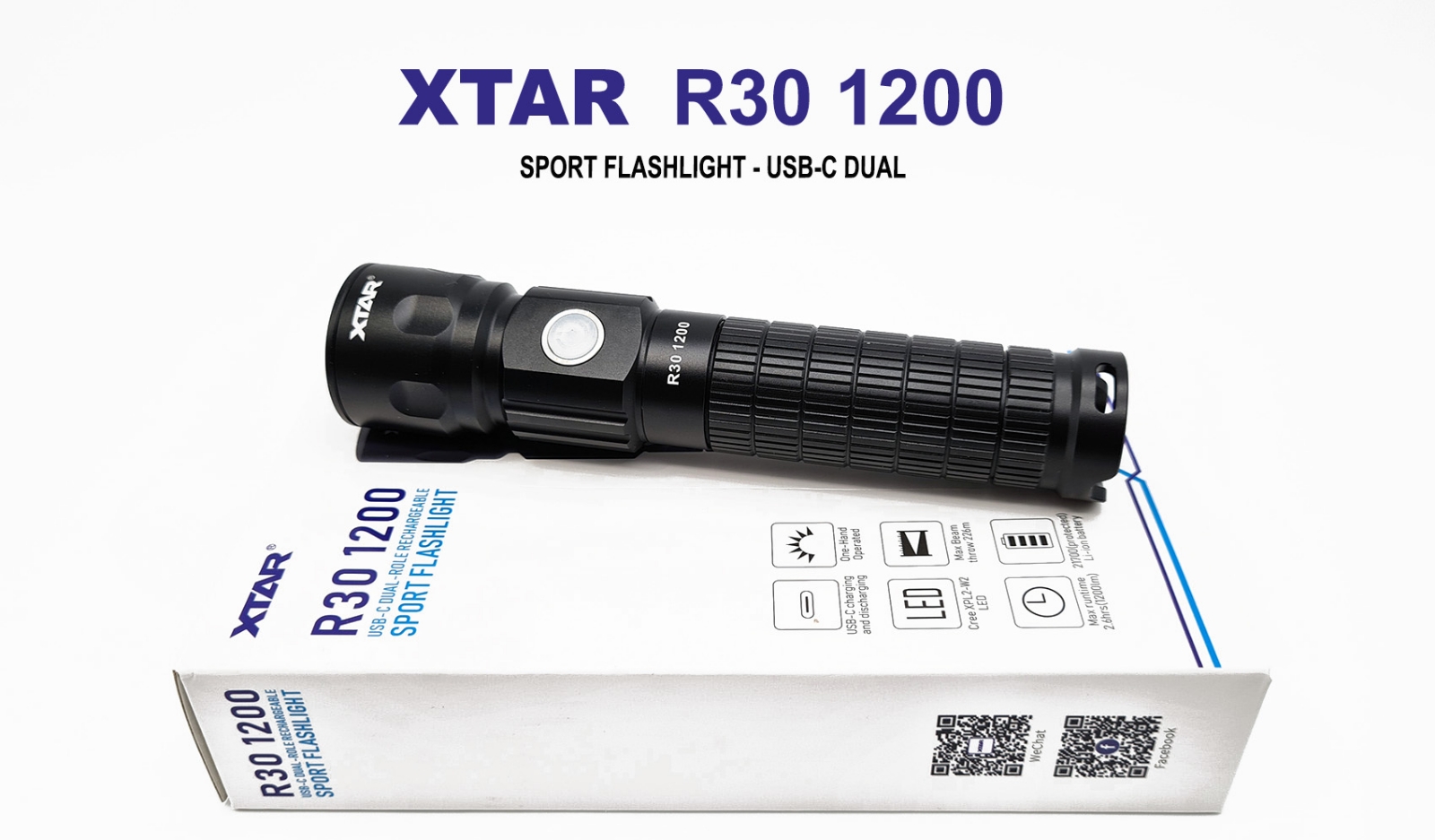 XTAR updates its R30 model with new features and increased light output.
XTAR R30 1200 is a well built flashlight, suitable for both indoor and outdoor use. The maximum light output is now 1200 lumens with a maximum autonomy of 70 hours. XTAR R30 1200 is equipped with the CREE XPL2-W2 LED and has 4 levels (Turbo, High, Mid and Low) in addition to the 2 special levels (Strobe and SOS). It is powered by a 4900 mAh 21700 battery and is rechargeable via the USB-C port which can also act as a power bank.
XTAR R30 1200 is IPX6 certified (protected against strong jets of water) with an impact resistance of 1.2 meters.
XTAR R30 1200 is the ideal companion for exploration, hunting, sports and home applications.


XTAR R30 1200 arrives in the classic white cardboard box. The packaging shows the main features that distinguish the new XTAR. Inside the package I received I found, in addition to the XTAR R30 1200, the battery in 21700 format with 4900 mAh, the USB-C charging cable and the manual in Chinese / English. A spare lanyard and O-ring should also be included in the sales package. 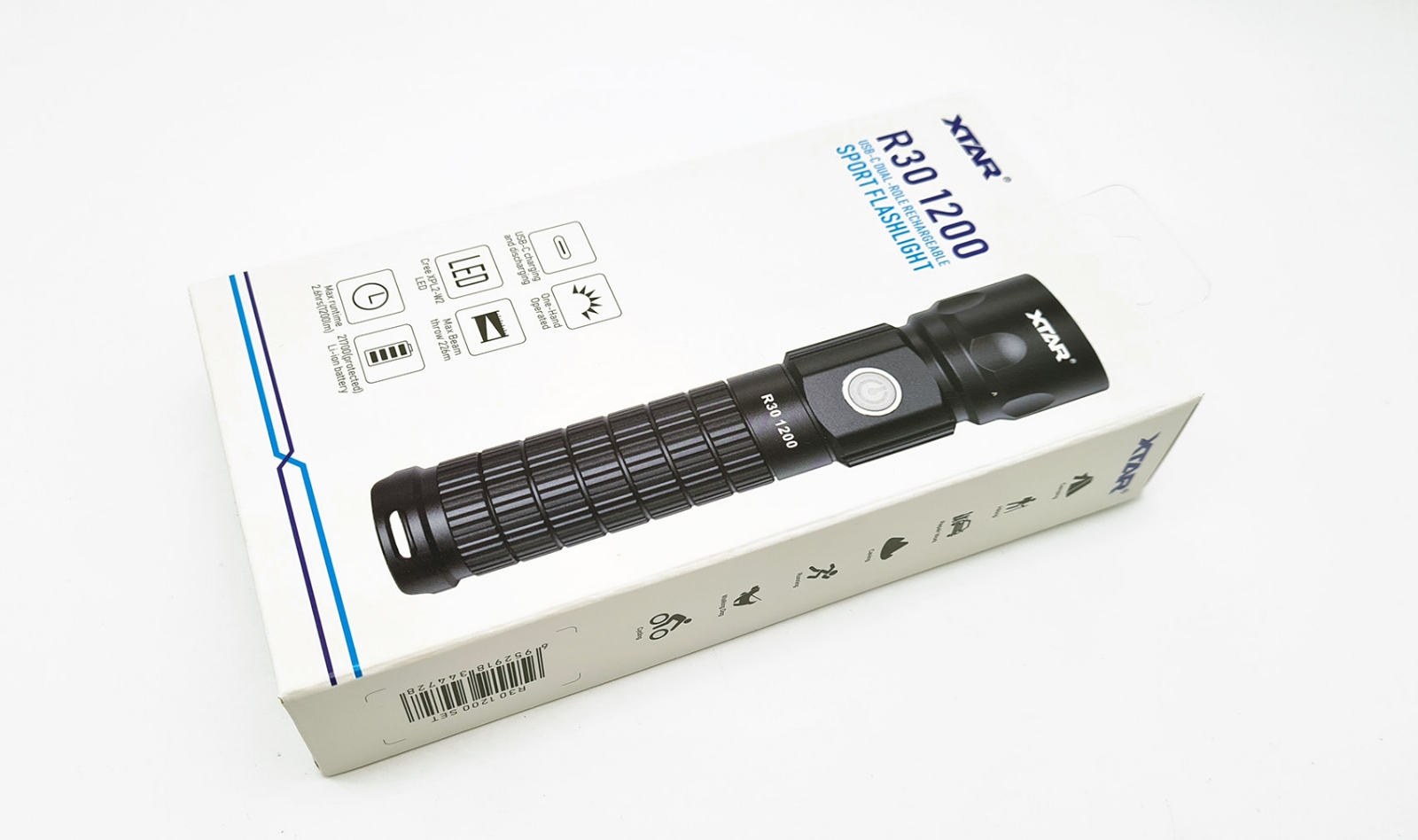 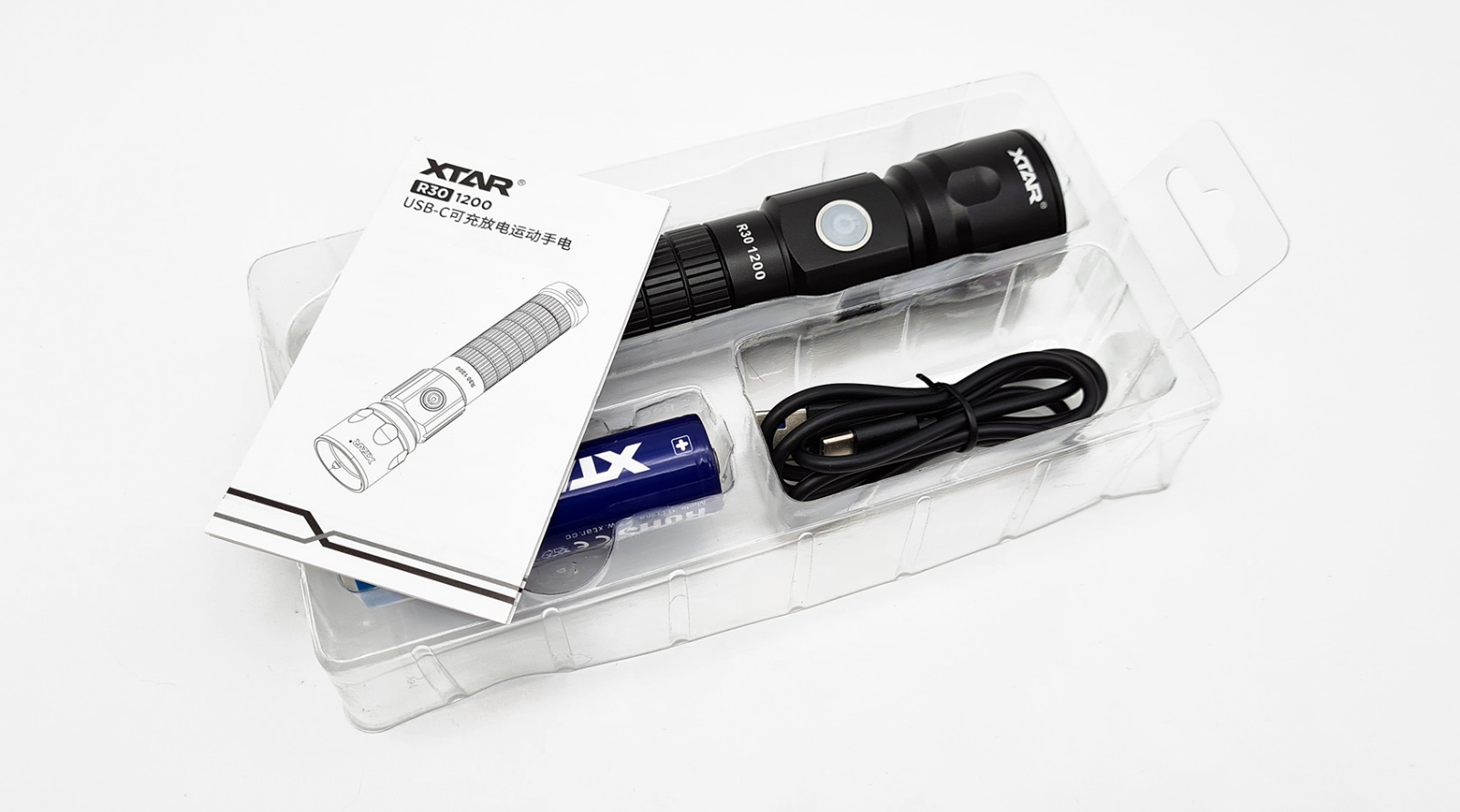 
XTAR R30 1200 has good build quality with good anodization and clearly legible lettering. The R30 1200 holds well in the hand while remaining compact despite its 158.2mm length. Nice design and anti-slip knurling of the flashlight body. The head has a particular shape to limit rolling. The shape of the tail allows the R30 1200 to be placed upright (candle).

On the head of the XTAR R30 1200 we find a SMO dish with the Cree XPL2-W2 (6500K) LED in the center. The bezel is deep and protects the glass well while the particular design of the head limits rolling. 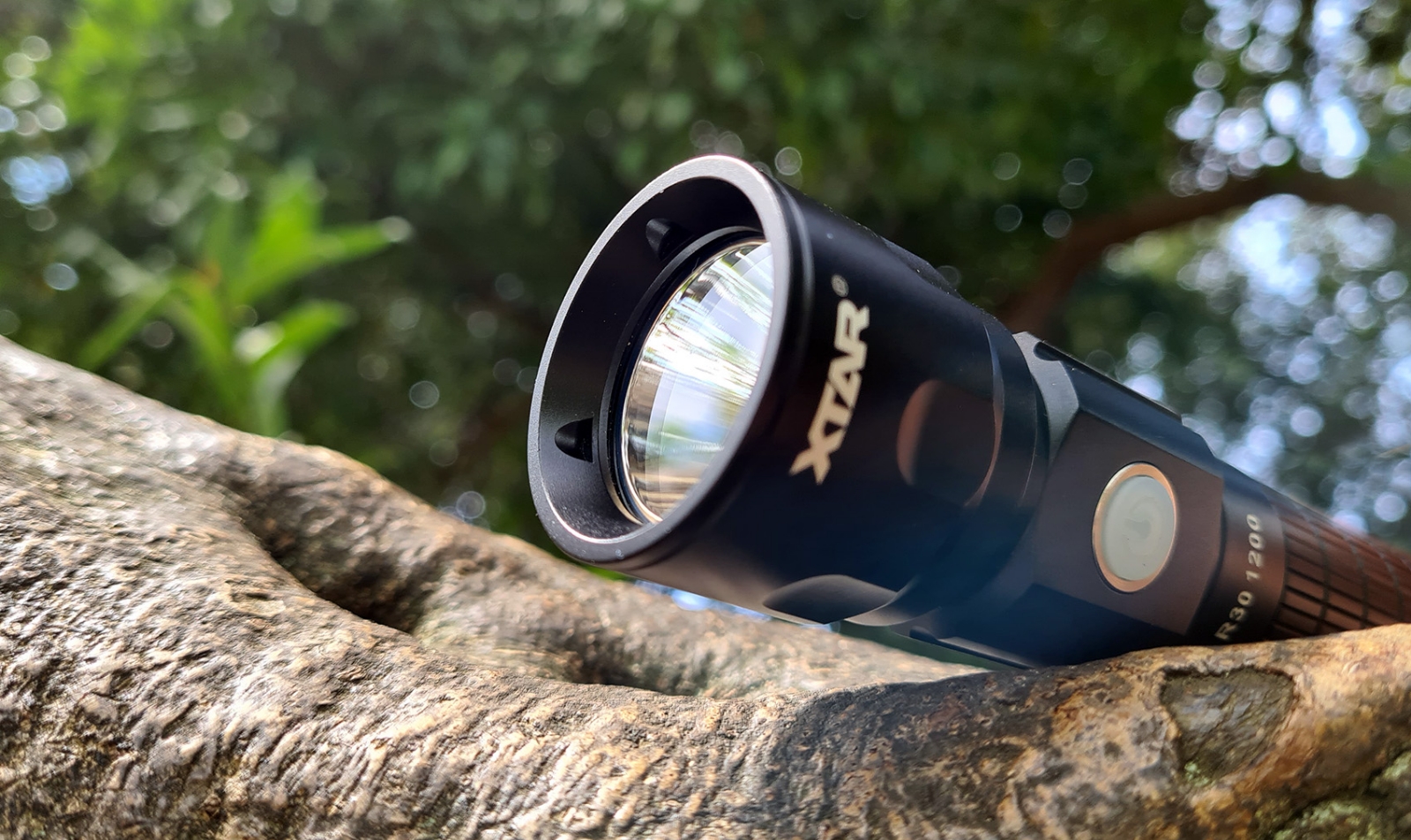 The power button, of generous dimensions, allows the complete management of the R30 1200. Good feeling that it transmits to the touch. It is made of flat rubber and white in color; excellent for spreading the green or red color of the notification LED below. The click is audible.
The notification LED acts as a residual charge indicator (with the flashlight On) according to the following values:
Solid green: 100-25% power
Solid red: power 18-25%
Flashing red: power <18% 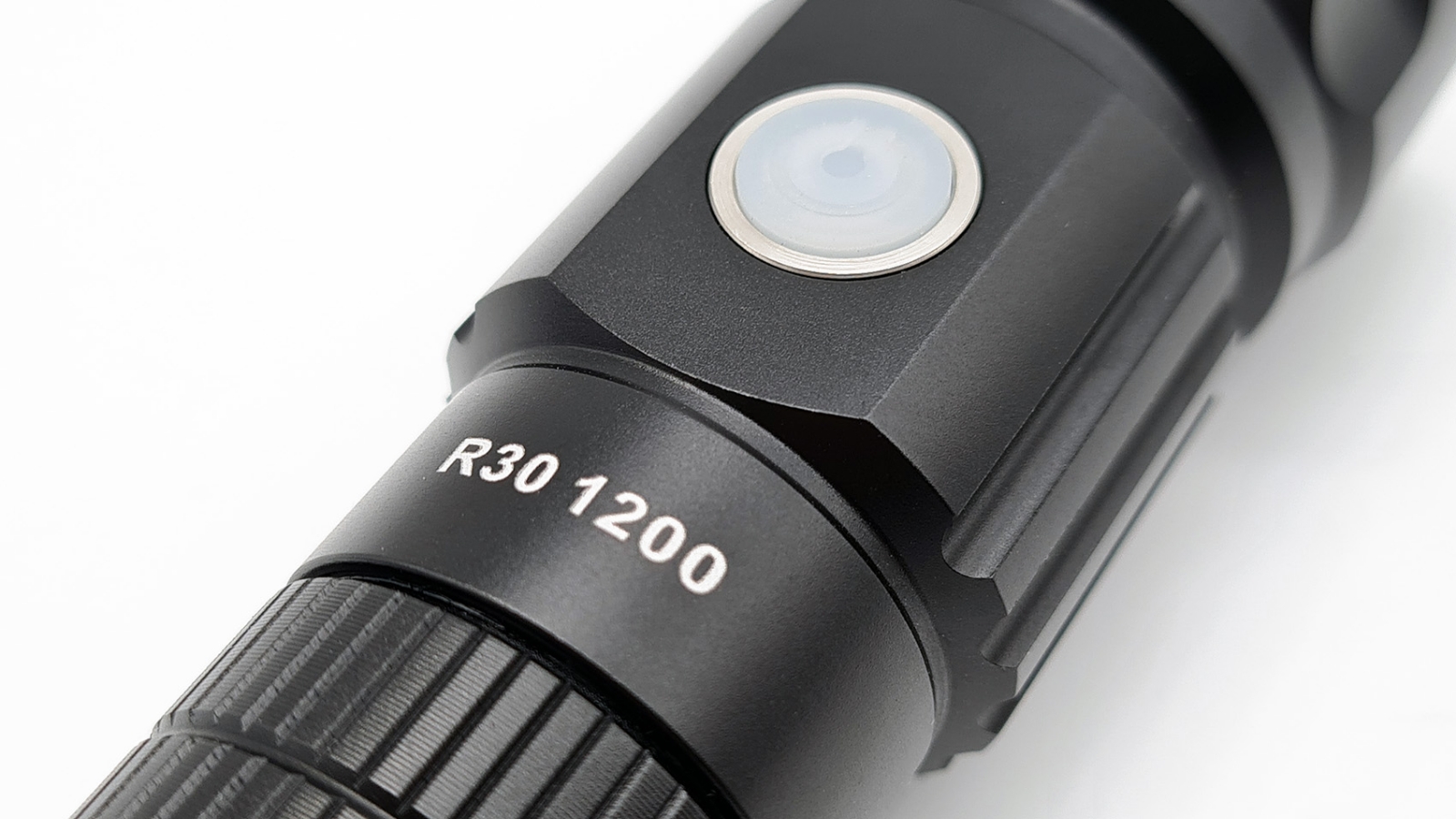 On the opposite side of the switch, we find the charging port in USB-C format protected by a not so thick rubber flap.
During the charging process, the notification LED lights up red until the charge is complete where the color of the LED will turn green.
At the end of the charge the value reached in volts is slightly lower than what we are used to stopping at 4.14V.
The XTAR R30 1200 flashlight doubles as a USB-C power bank. We can, for example, charge the mobile phone by inserting the USB-C cable on the flashlight and on the mobile phone. 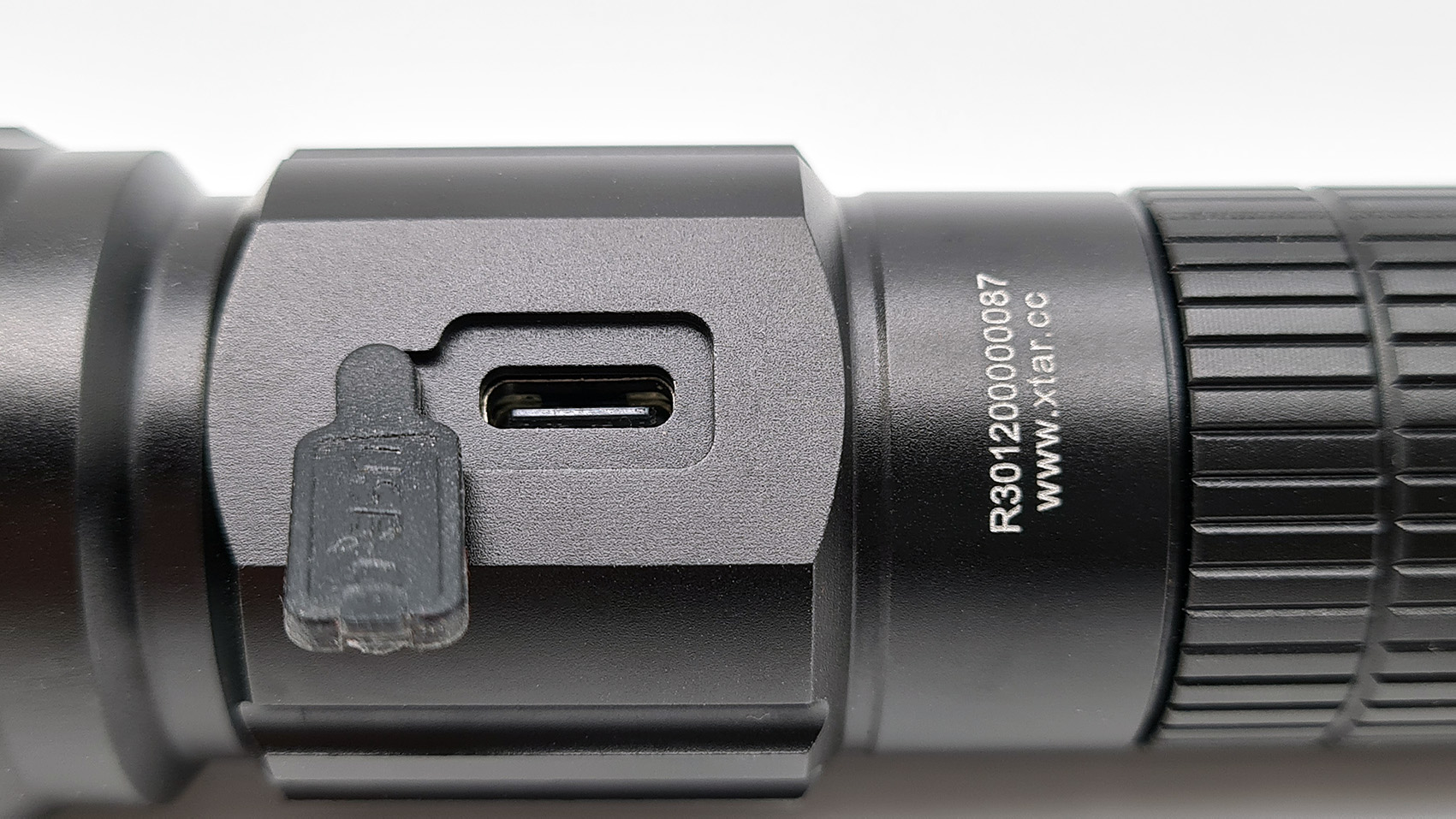 The central body of the XTAR R30 1200 has a non-slip knurling that ends on the tail. It is not possible to insert a clip on the torch body, the only transport aid is that of the lanyard that can be inserted in the tail.


Below the central tube are the threads which are anodized and well lubricated. By slightly unscrewing the tail, you can take advantage of the mechanical lock to prevent accidental ignition. The XTAR R30 1200 is IPX6 certified (protected against strong jets of water). 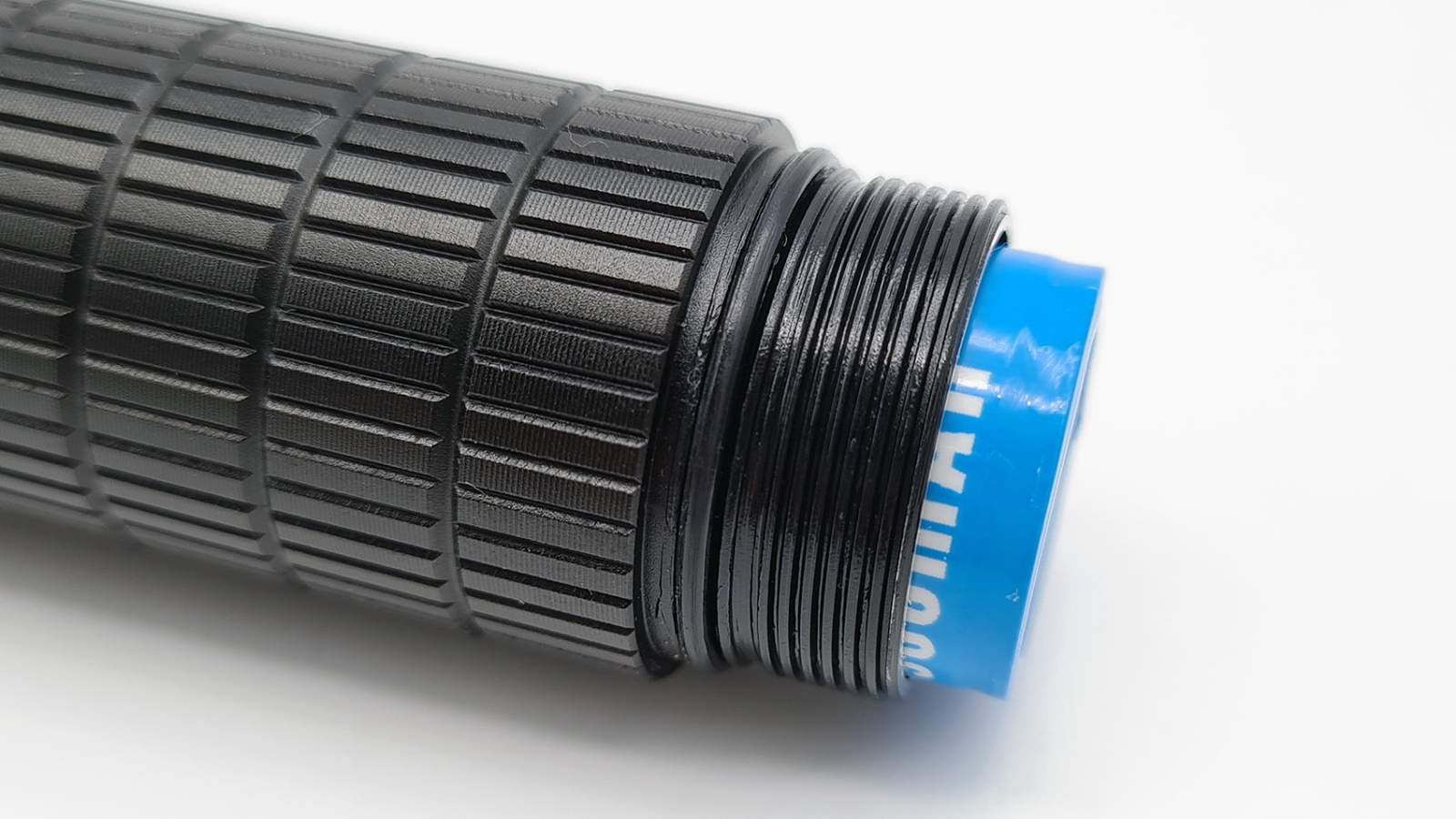 At the two poles, for contact with the battery, we find a spring contact system both on the negative and on the positive. 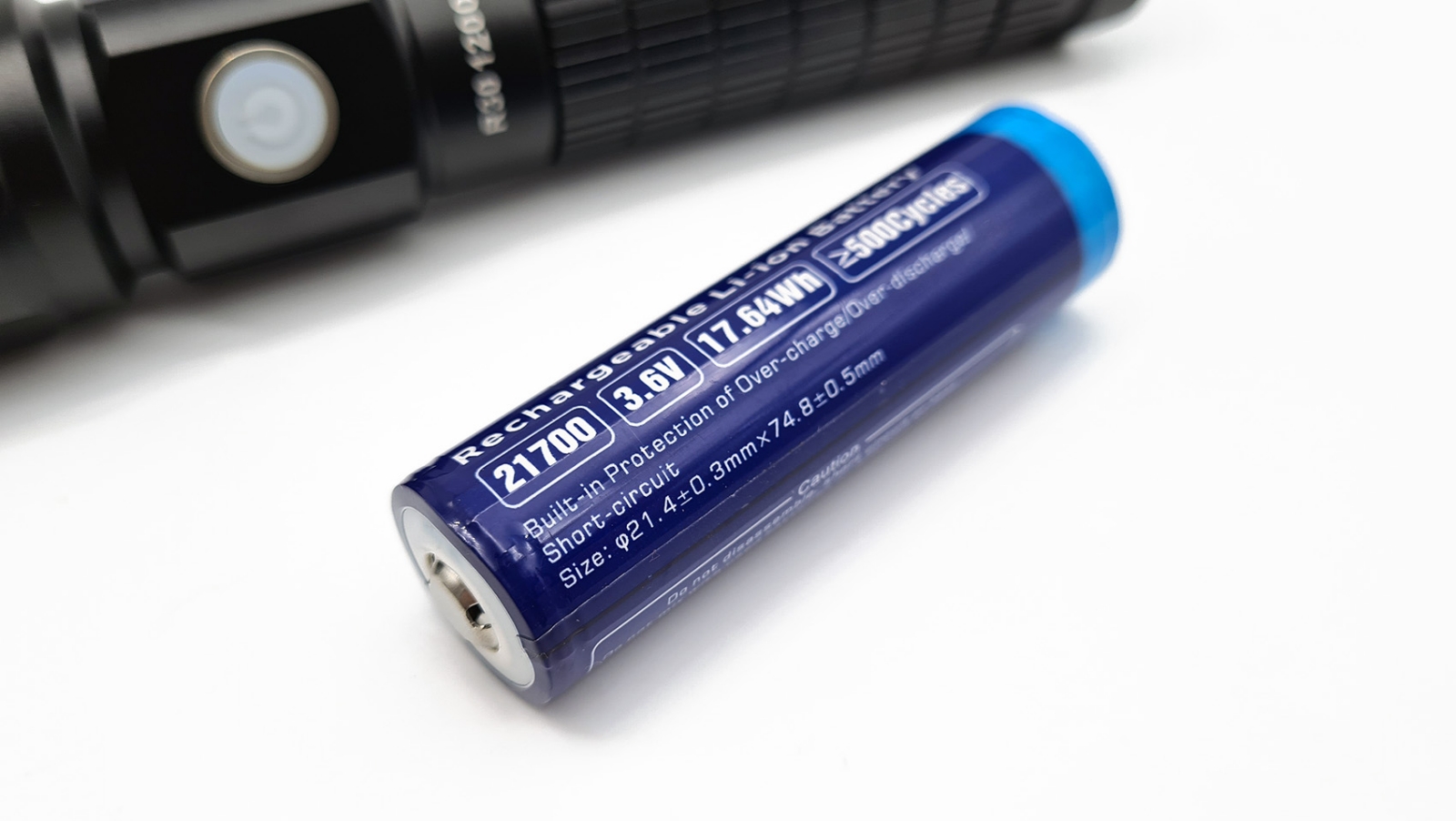 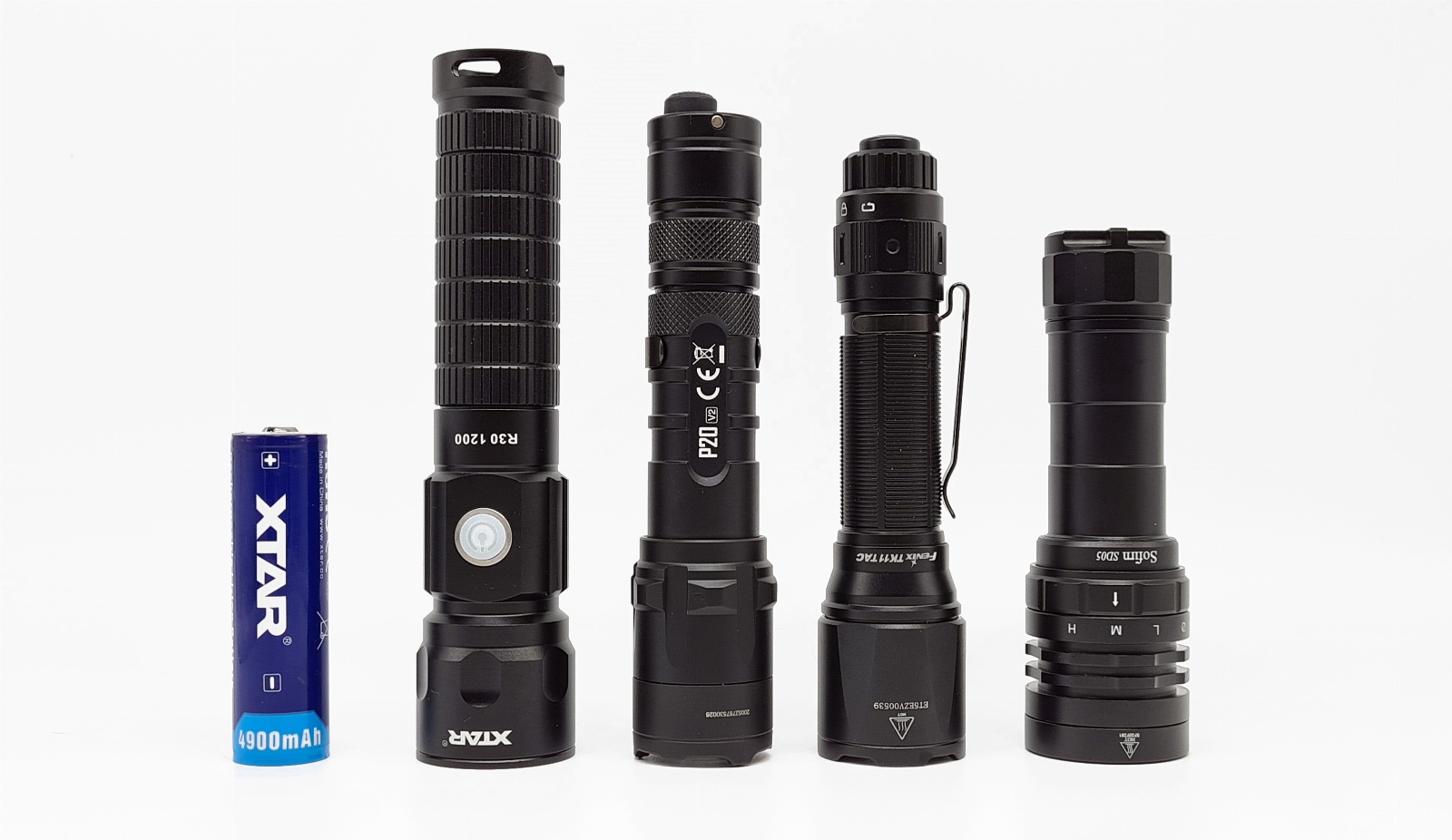 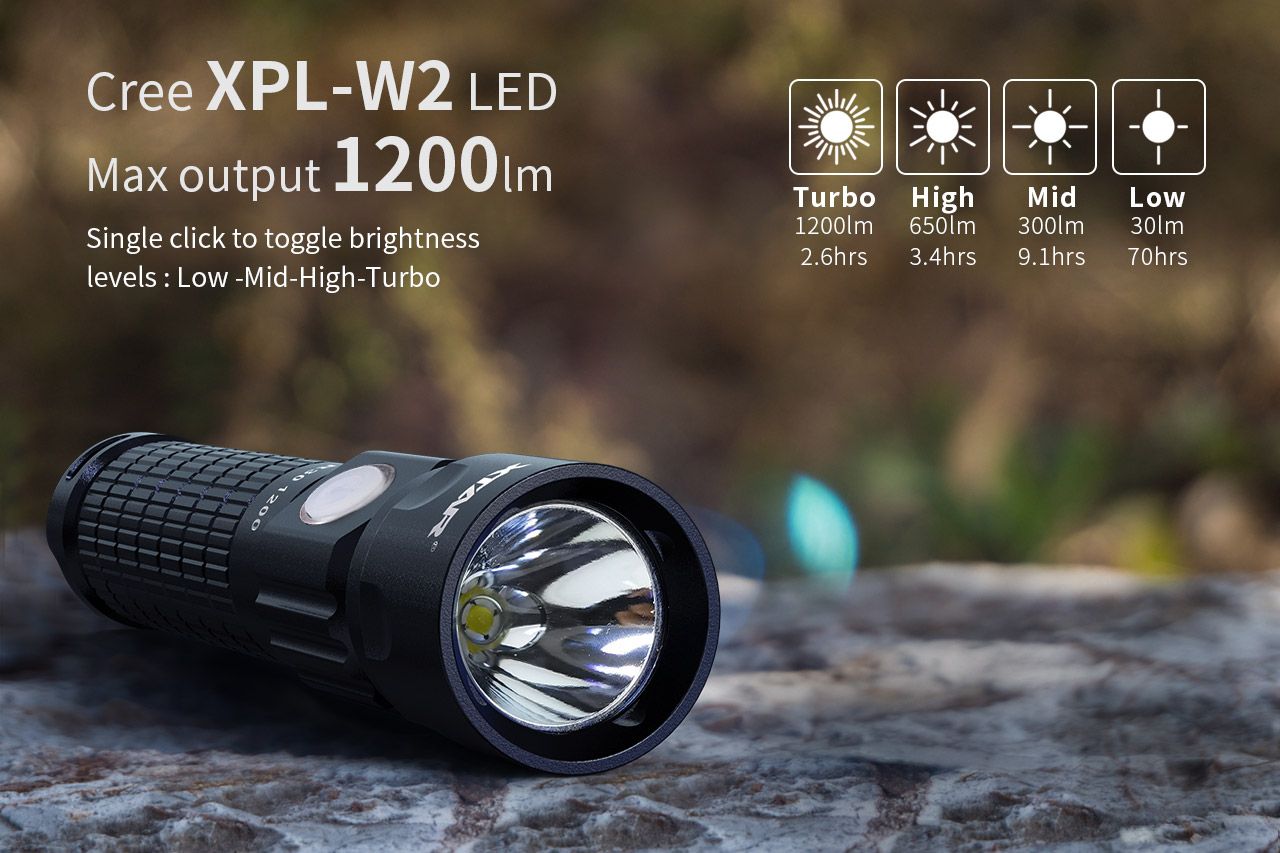 
The beam of the XTAR R30 1200 has a good uniformity without particular artifacts and with a not too cold tint. Good shooting with a well present hotspot and peripheral lighting (spill) that starts about one meter from the walk. The XTAR R30 1200 is ideal for lighting at medium or low distances. The MID level (300lm) allows you to walk in the dark with good visibility. 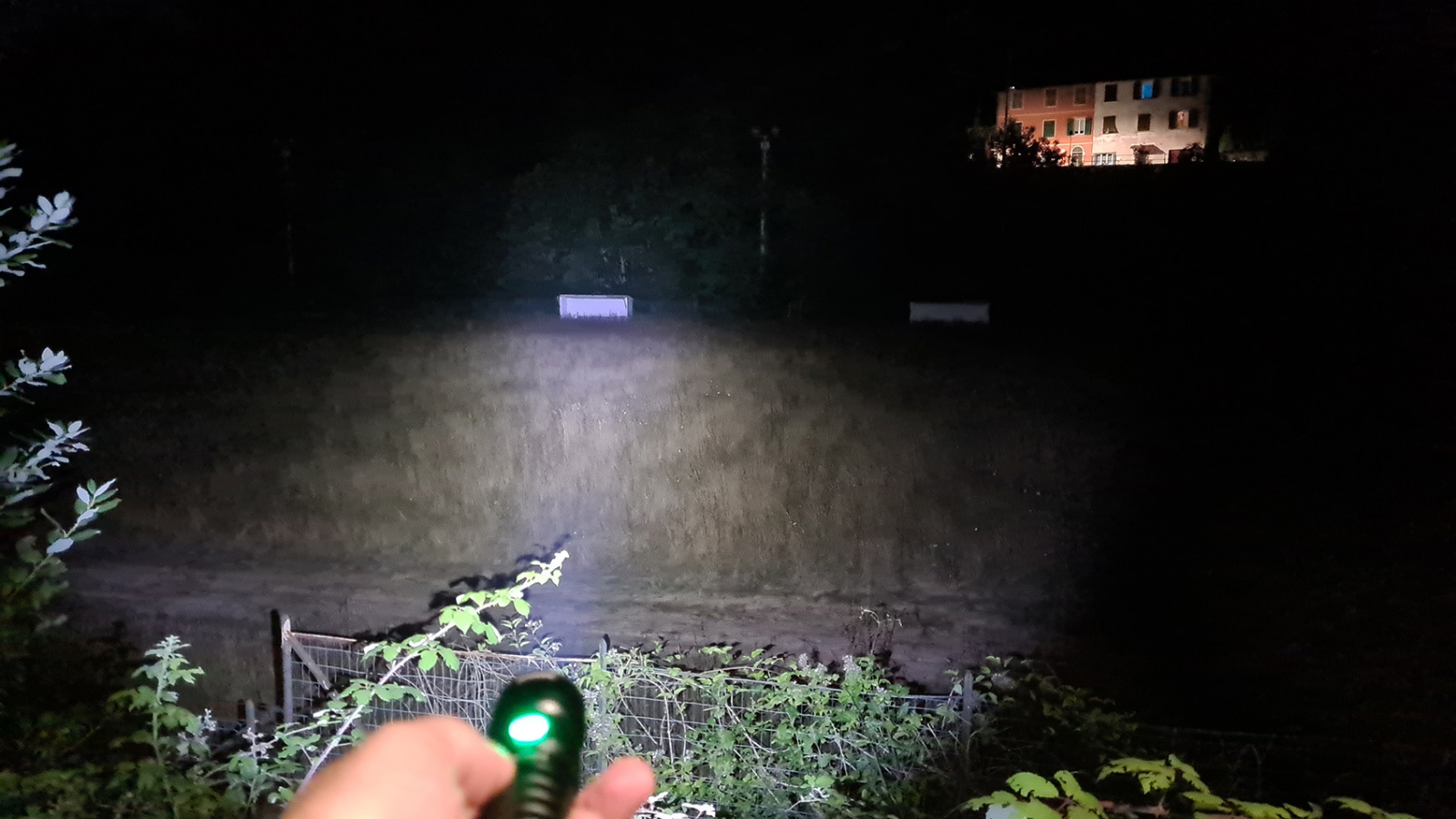 The Runtimes were done indoors at a temperature of about 27°C without forced ventilation.
The battery (supplied) has been fully charged (with the R30 1200) at 4.14V.

I would like to clarify that the values expressed by the graphs must be evaluated above all as a reference because they are made with means and conditions different from those used in the laboratory.

Good discharge curve with values that reflect those declared by the manufacturer.

I liked the XTAR R30 1200, it is a versatile flashlight suitable for both indoor and outdoor use at medium or low distances.
XTAR R30 1200 is sold with a battery in 21700 format of 4900mAh and is compatible with non-proprietary batteries that are readily available and not disproportionate in cost. R30 1200 has a simple user interface having 4 normal and 2 special levels including the strobe useful in particular situations.
It has a USB-C DUAL charging port with the possibility of being used as a Power Bank to recharge, for example, a mobile phone.
Good discharge curve with values similar to those declared by the parent company. Unfortunately the R30 1200 does not have a clip or case (this is easily available); the only help is given to the possibility of inserting a lanyard in the tail.
Thank you for reading the review.