Nitecore HC65 V2 was sent to me directly by Nitecore for the review.
For the description and technical data of the house: https://flashlight.nitecore.com/product/hc65v2(link is external)
For purchase: https://www.nitecorestore.com/Nitecore-HC65-v2-Rechargeable-Headlamp-p/fl-nite-hc65v2.htm(link is external) 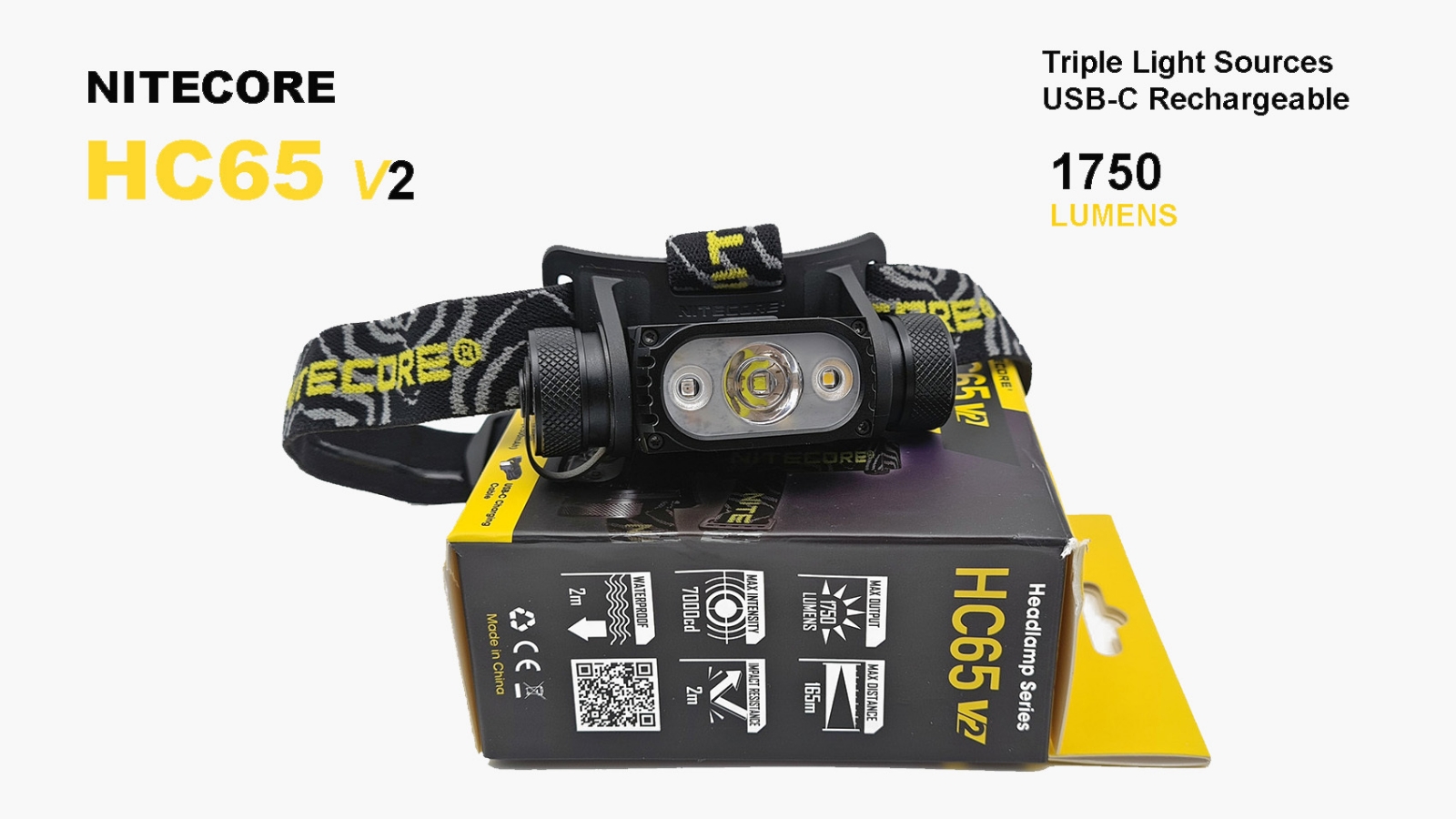 Nitecore updates its HC65 headlamp with a new brighter version and faster to load; the Nitecore HC65 V2.
Nitecore HC65 V2 is a flashlight with front lighting system suitable for many uses and in particular for runnung, caving, camping, rescue, climbing and mountaineering.
It is powered by a 3500mAh 18650 Li-ion battery (included) or alternatively by 2 CR123 / RCR123 batteries and is rechargeable via the USB-C connector.

HC65 V2 uses a unibody TIR lens system equipped with 3 different LEDs with a wide beam (100 °) flood beam covering a maximum distance of 165 meters. The main LED, a Luminus SST-40-W (White LED) is capable of delivering 1750 lumens for an intensity of 7000 cd.
Nitecore HC65 V2 has a memory function and has only one button to manage: 5 primary levels with white light, 2 special levels (Beacon and SOS), 3 auxiliary red light levels and an auxiliary white light (High CRI ≥ 90).
Nitecore HC65 V2 is certified IP68, 2 m (waterproof and submersible) with an impact resistance of 2 meters. 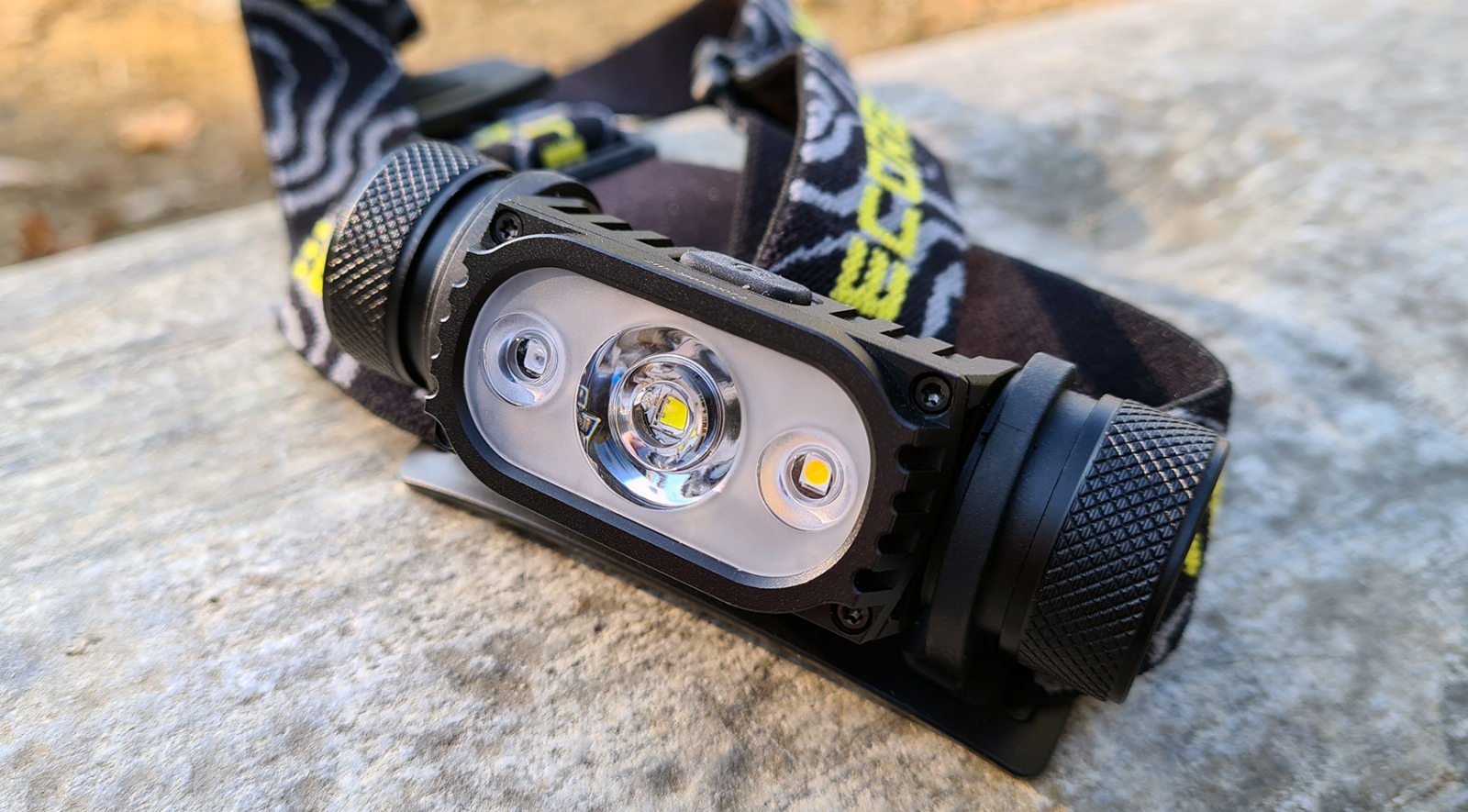 Note: The stated data is measured in accordance with the international flashlight testing standards ANSI/PLATO FL 1-2019, using 1 x 18650 Li-ion battery (3,500mAh) under laboratory conditions.
The data may vary in real world use due to different battery usage or environmental conditions. * The data is tested without temperature regulation. * TURBO Availability: The TURBO level is only accessible when using an 18650 rechargeable Li-ion battery with a discharge current over 8A. It is inaccessible when using CR123/RCR123 batteries

The Nitecore HC65 V2 is sold in a cardboard box. The main characteristics of the flashlight are specified on it. Opening the box we find inside the flashlight with the included accessories which are: NITECORE 18650 lithium-ion rechargeable battery (NL1835HP 3,500 mAh), 2x spare O-rings, USB-C charging cable, headband and bracket. As usual, there is also a multilingual manual. 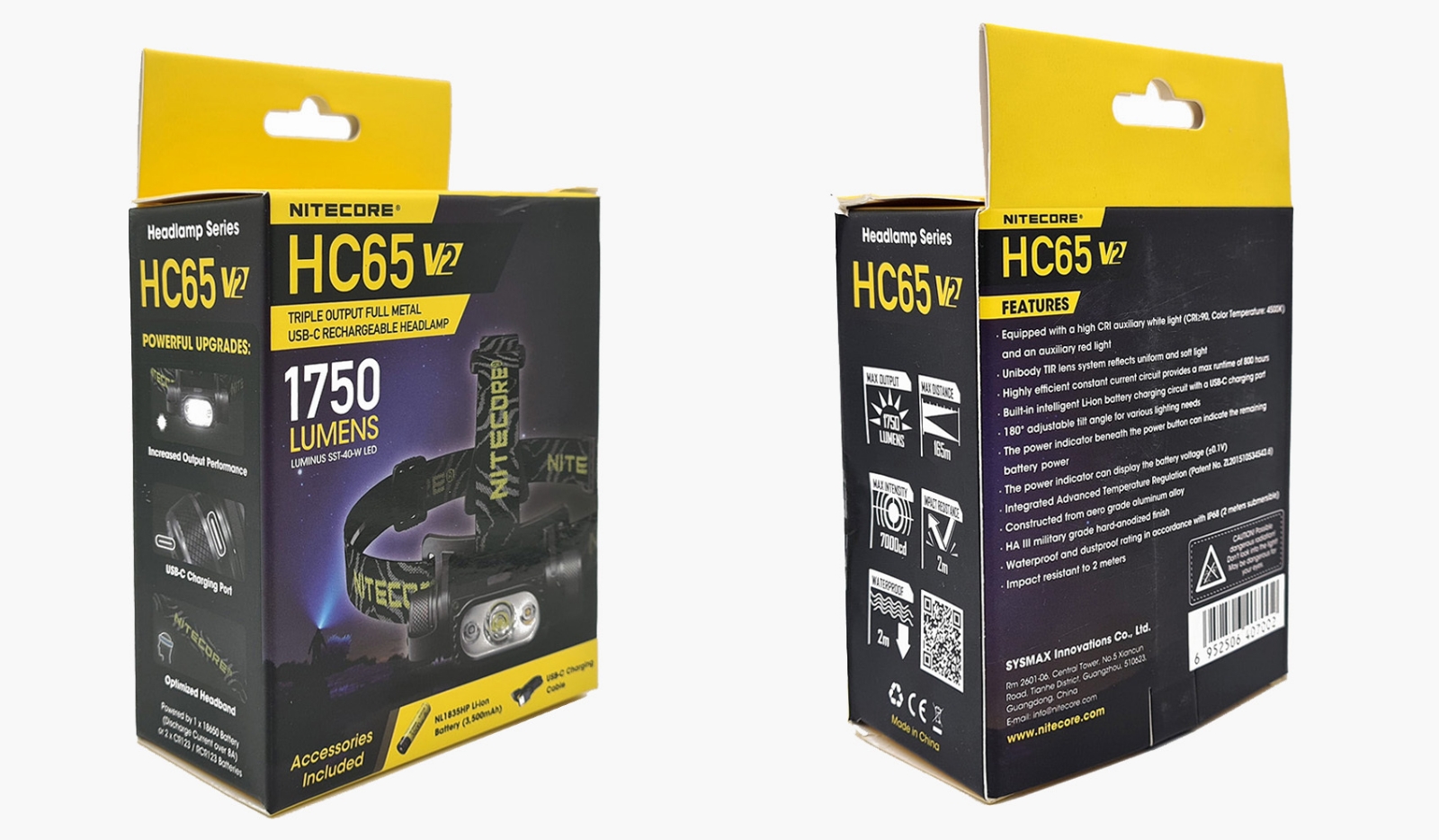 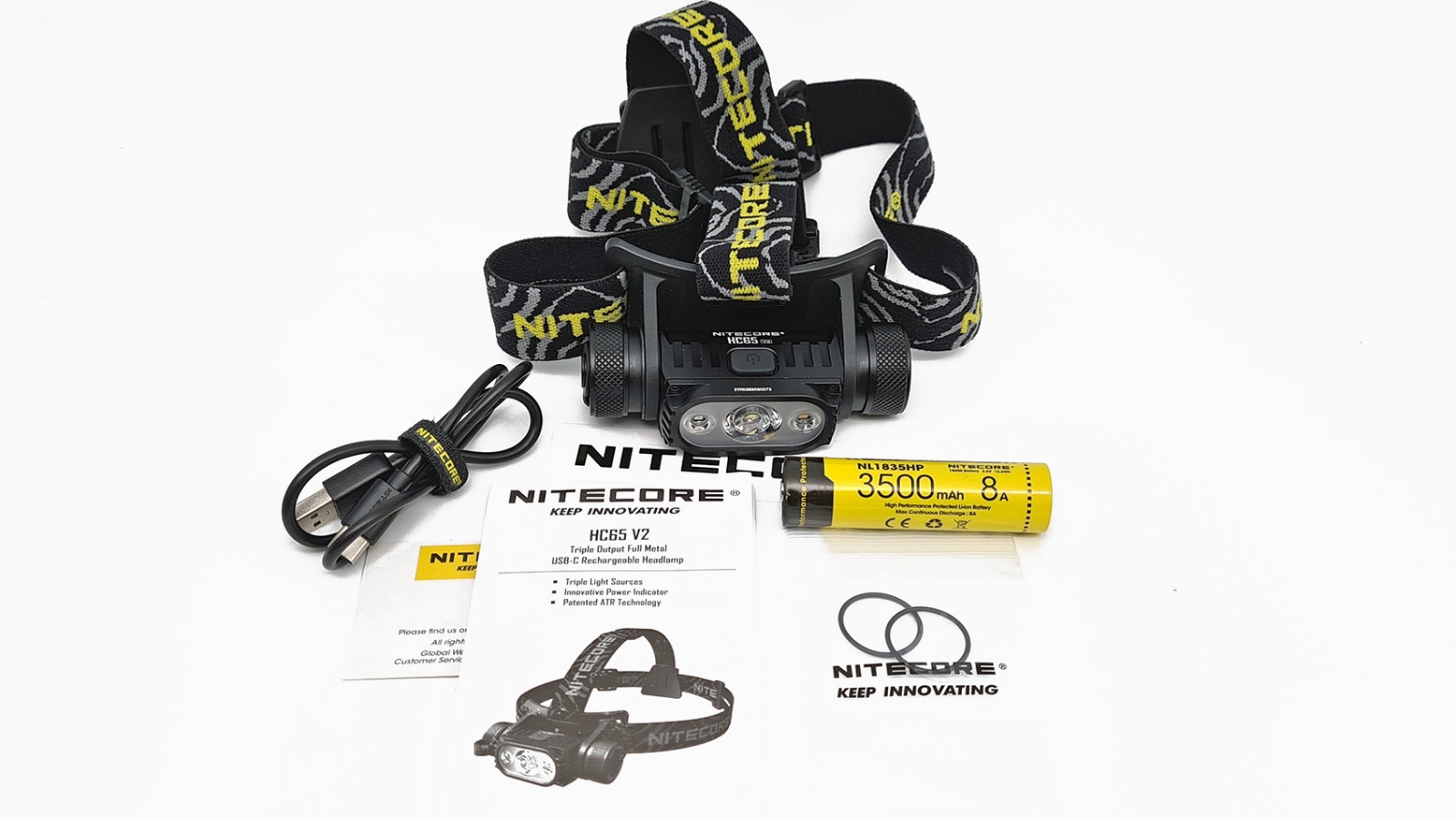 The breathable headband has been redesigned by adding a rubber pad at the back that guarantees perfect adherence and improved comfort to be able to comfortably wear the headlamp for a prolonged time. There is also a silicone strip near the headband that improves adherence as well as deflecting sweat to the sides of the head away from the eyes.
The bracket is well made and guarantees a good non-slip seal. The inclination of the HC65 V2 has a 180 ° adjustment; you have to do a little bit of force to turn it and, if necessary, to remove the flashlight from the headband, after having unscrewed the two caps. 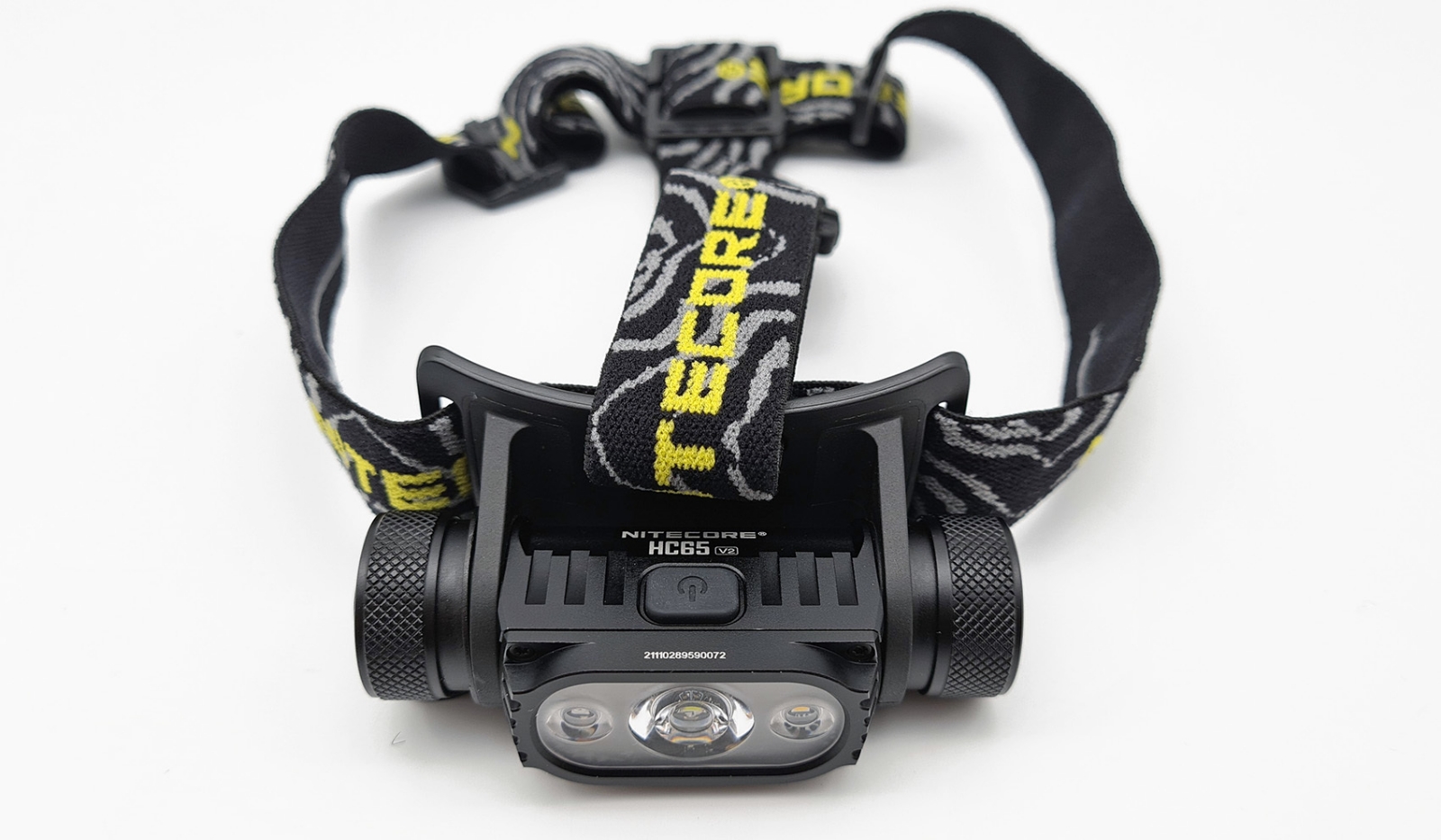 Nitecore HC65 V2 is constructed of aluminum alloy with anodized finish. Good materials and not excessive weight. The writings on the flashlight are well made. On the two sides we find 2 caps; frontally seen on the left we find the USB-C charging port, while on the right is the housing of the 18650 battery included in the sales package. Nitecore HC65 V2 is equipped with grooves in the upper part and laterally that facilitate the dissipation of heat when used at high light powers. 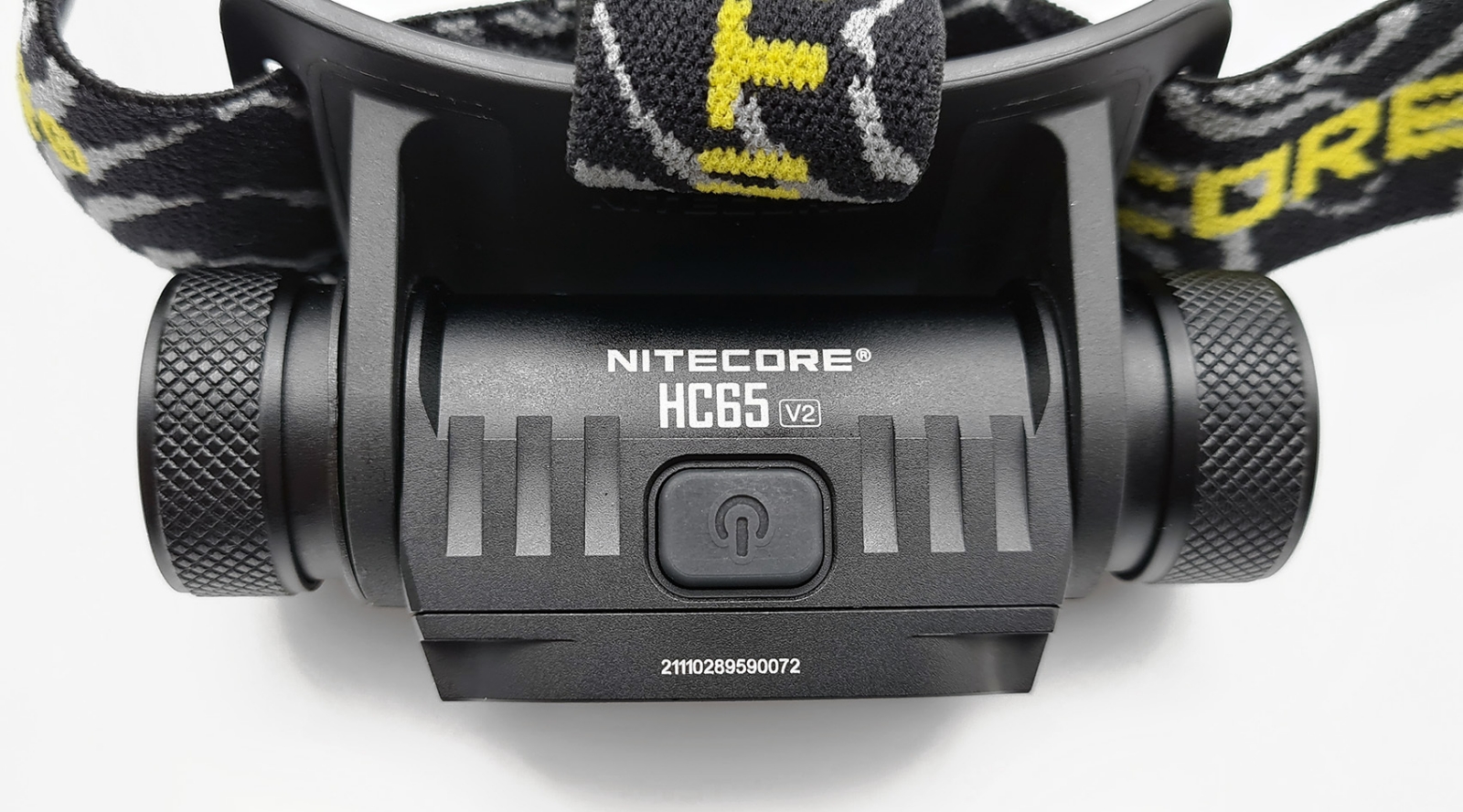 In the upper part of the HC65 V2 we find the power button, which allows complete management of the front, and the front projector with the new TIR Unibody system in the center.

The new power button, made of rubber, is barely embossed and has a good, slightly loud click. Once the battery has been inserted, the two LEDs under the button flash to indicate the remaining battery charge. 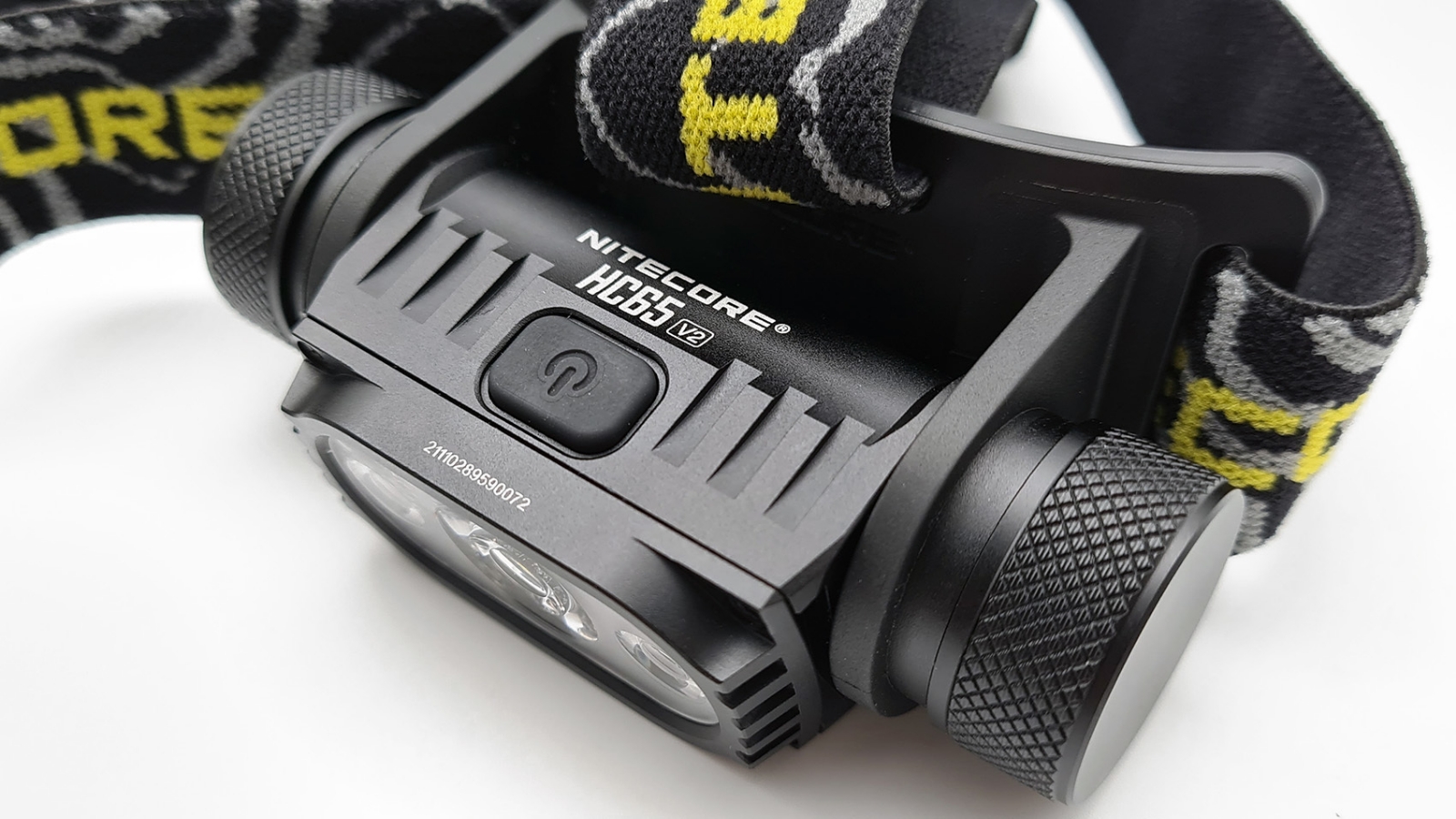 The optical system of the HC65 V2 uses a unibody TIR lens system and is equipped with 3 different LEDs with a wide beam (100 °) flood beam covering a maximum distance of 165 meters.
The main white light LED, in the center of the optical system, is a Luminus SST-40-W with a maximum light output of 1750 lumens for an intensity of 7000 cd.
Frontally, to the left of the primary LED, we find the auxiliary red light LED of 11 lumens max.
Frontally, to the right of the primary LED, we find the auxiliary white light LED High CRI (CRI≥90) of 35 lumens. 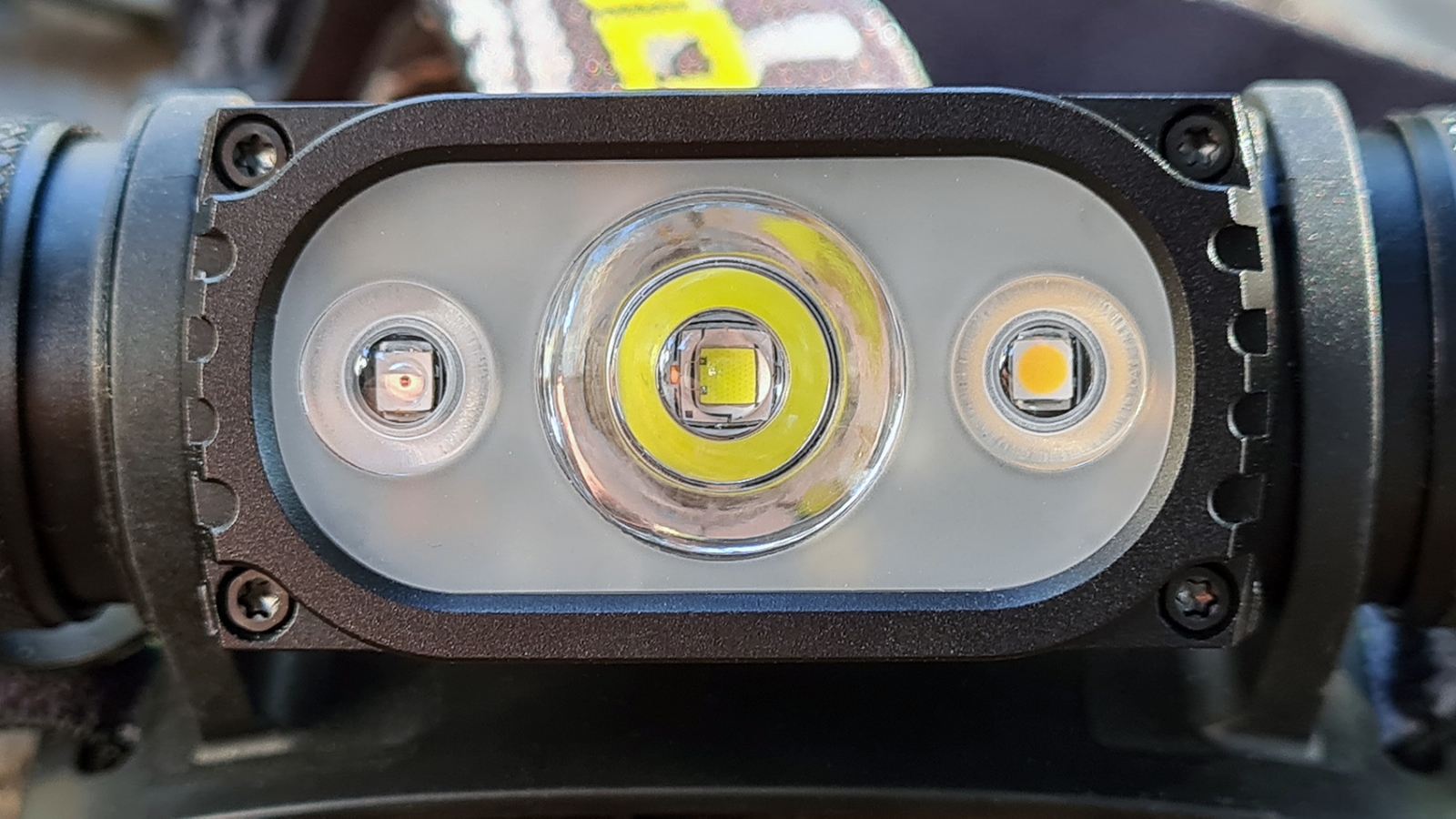 Nitecore HC65 V2 has mechanical protection against reverse polarity. If necessary, the front can be used with two CR123 / RCR123 batteries.
Nitecore from incompatible 18650 Flat Top batteries. I tried using a battery without the button on the head (Sanyo NCR18650GA) and the HC65 V2 worked.
The package includes a rechargeable lithium battery in 18650 format (Nitecore NL1835HP 3,500 mAh – 8A). 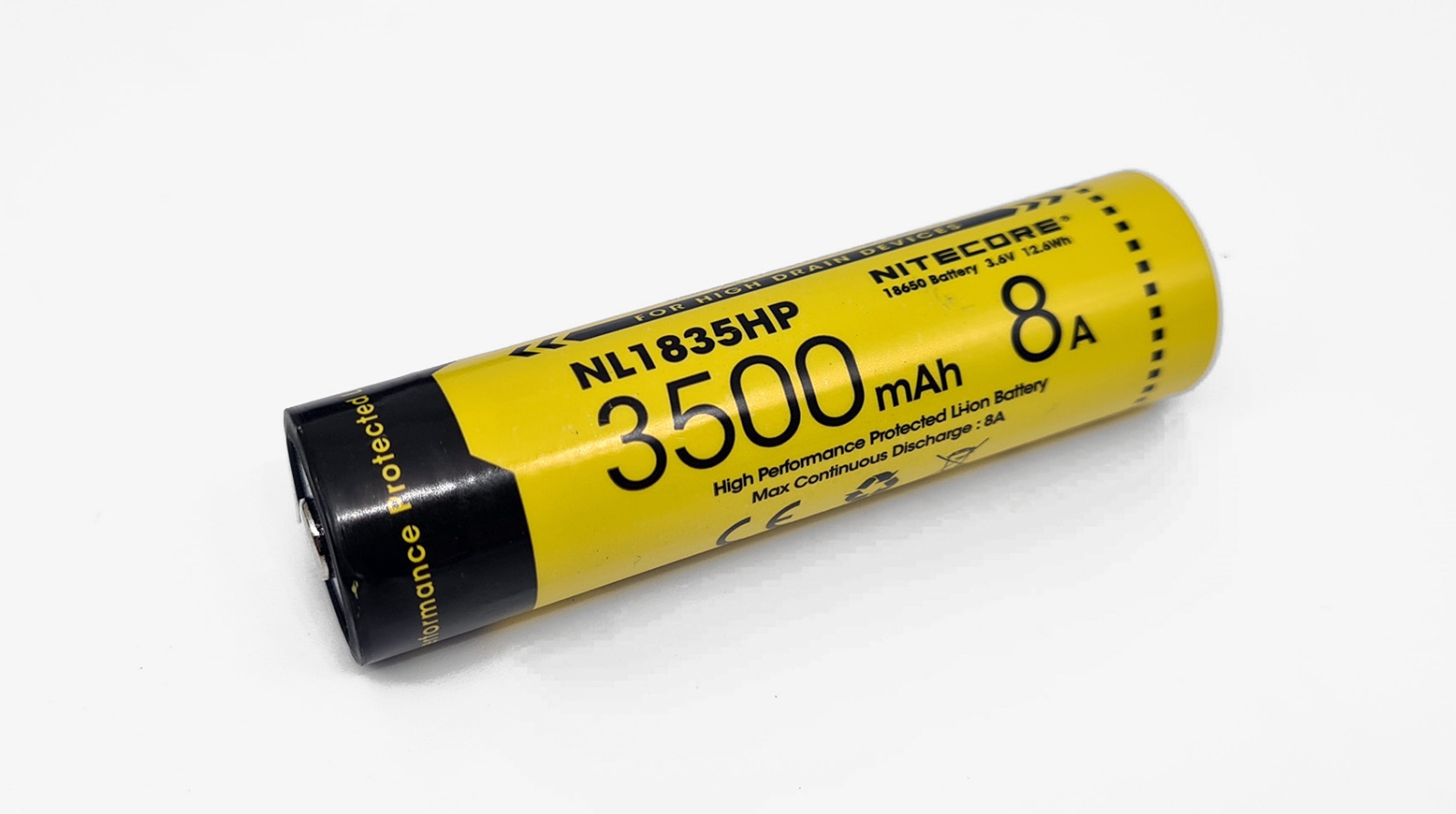 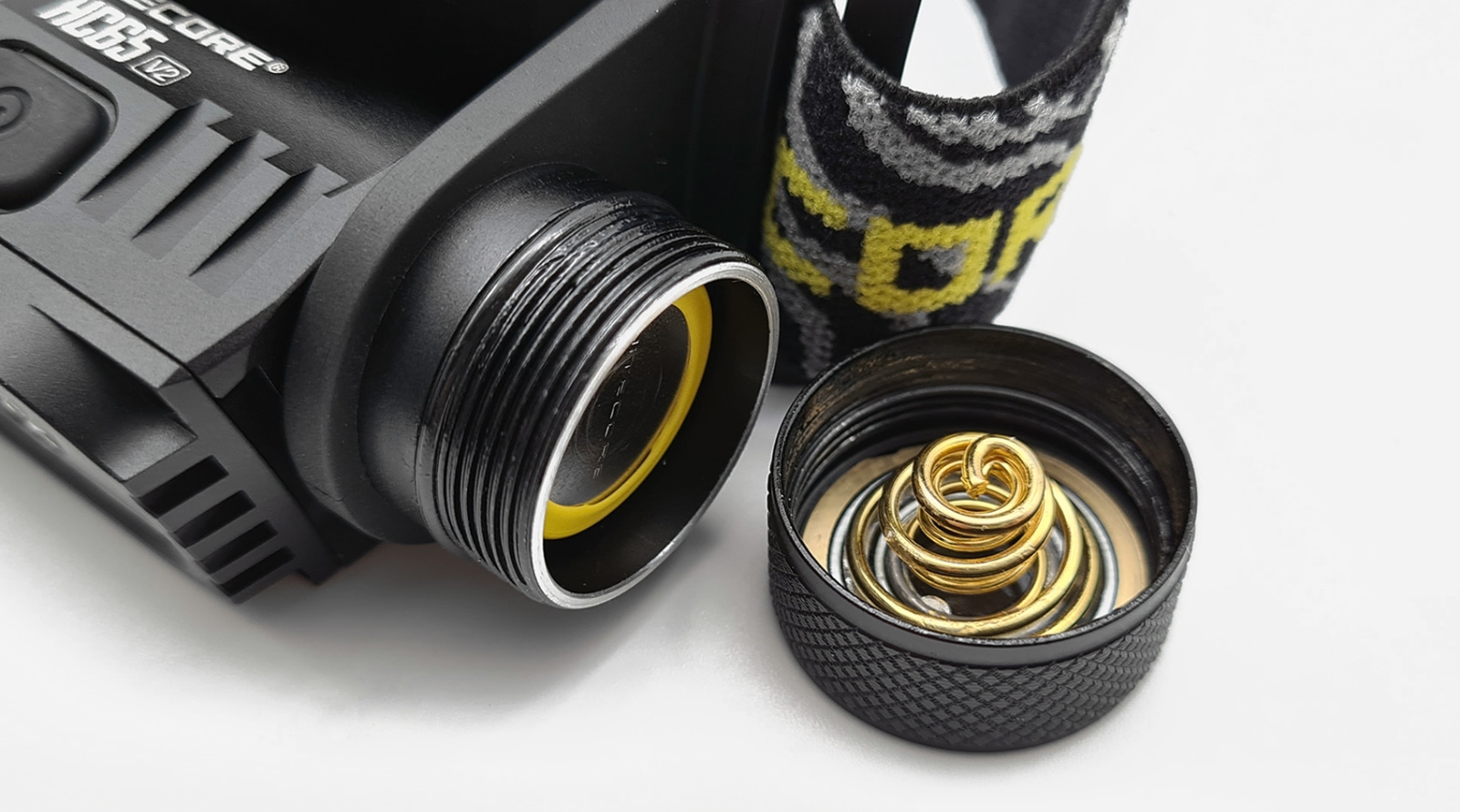 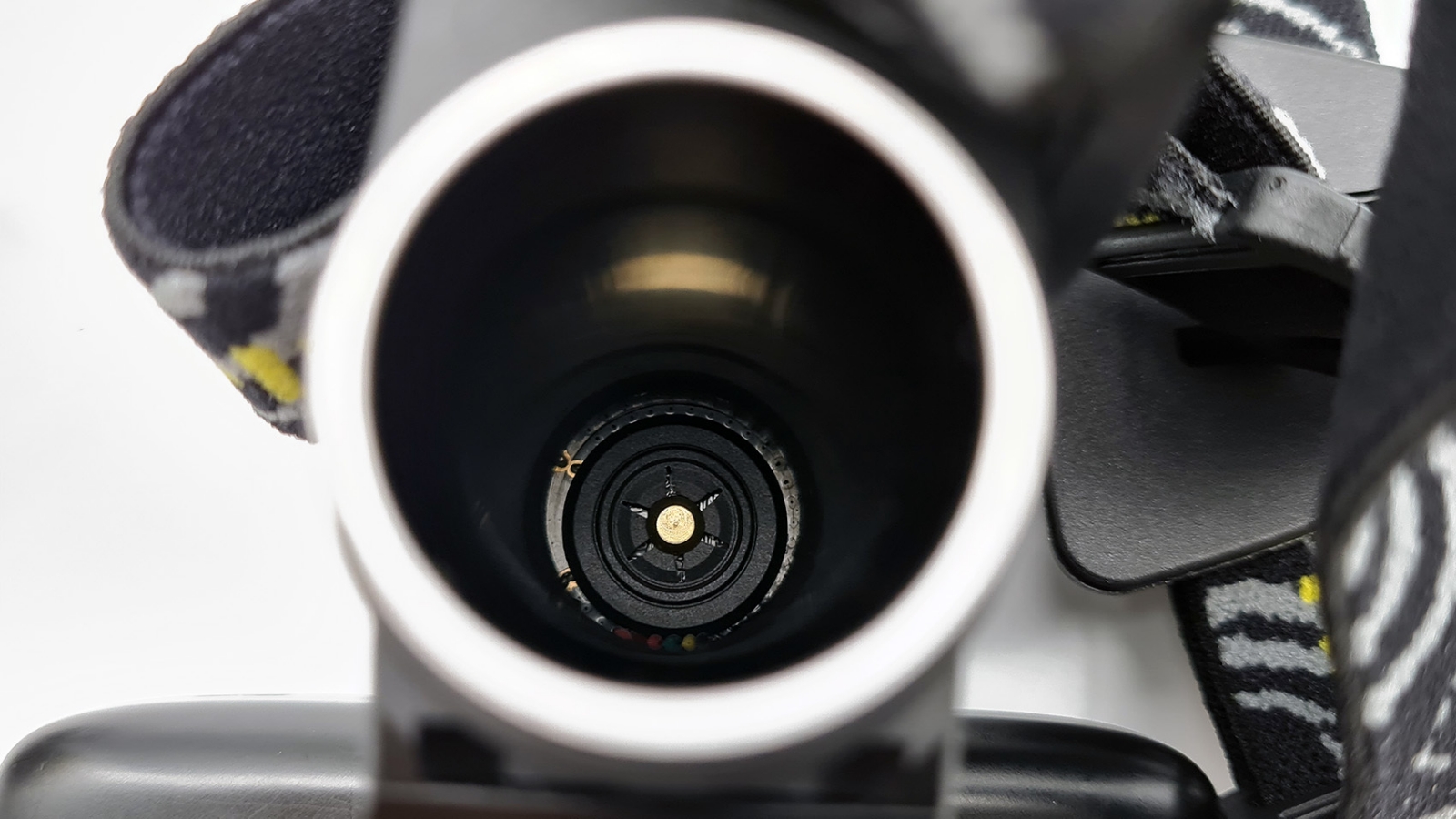 One of the novelties of this revamped version is the USB-C charging socket. The charging port is hidden and not in contact with external agents. To access it, just unscrew the cap to the left of the front. Above the cap you can see the words Rechargeable and USB-C. On the thread, well greased, we find an O-ring for water protection. 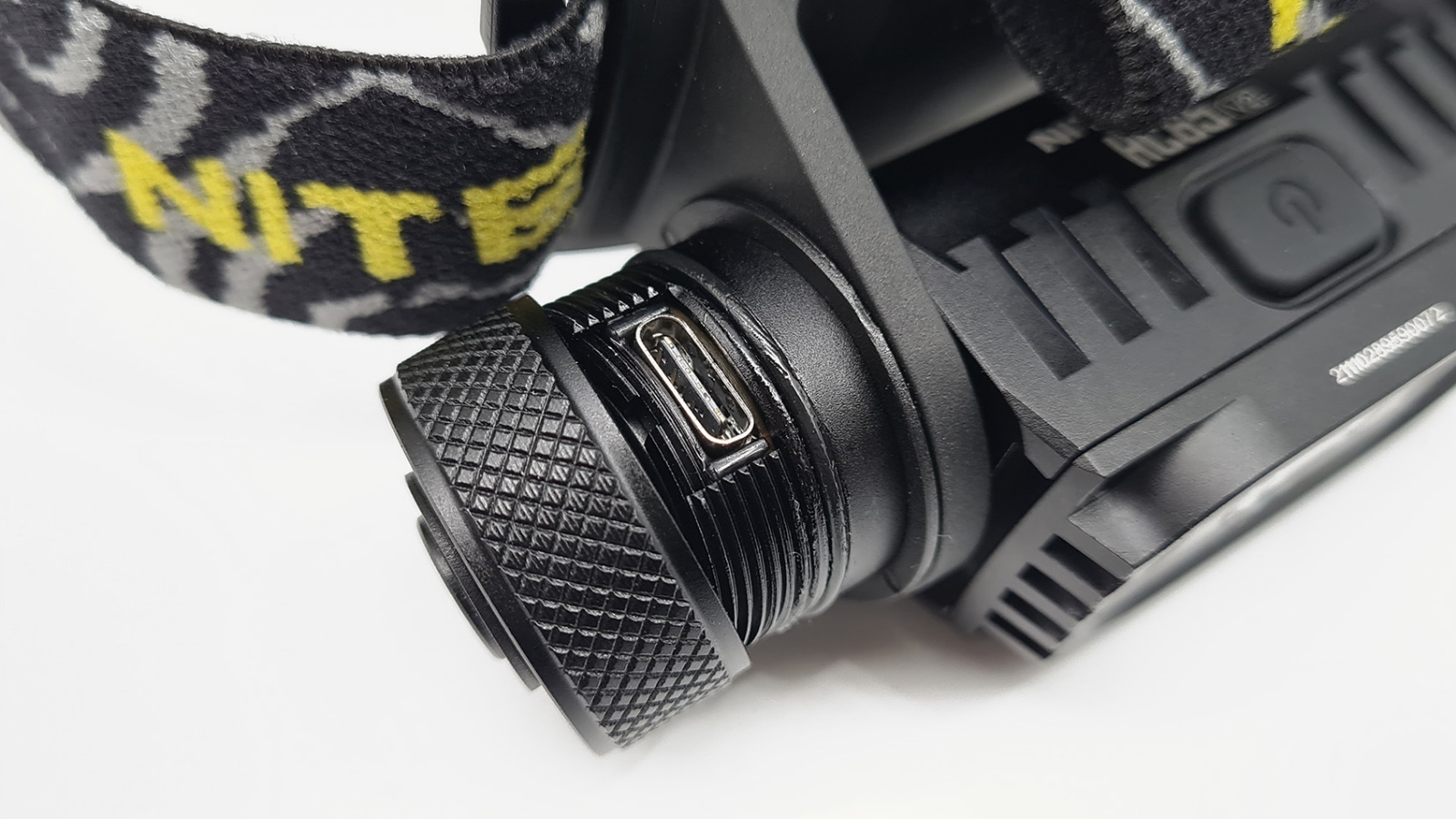 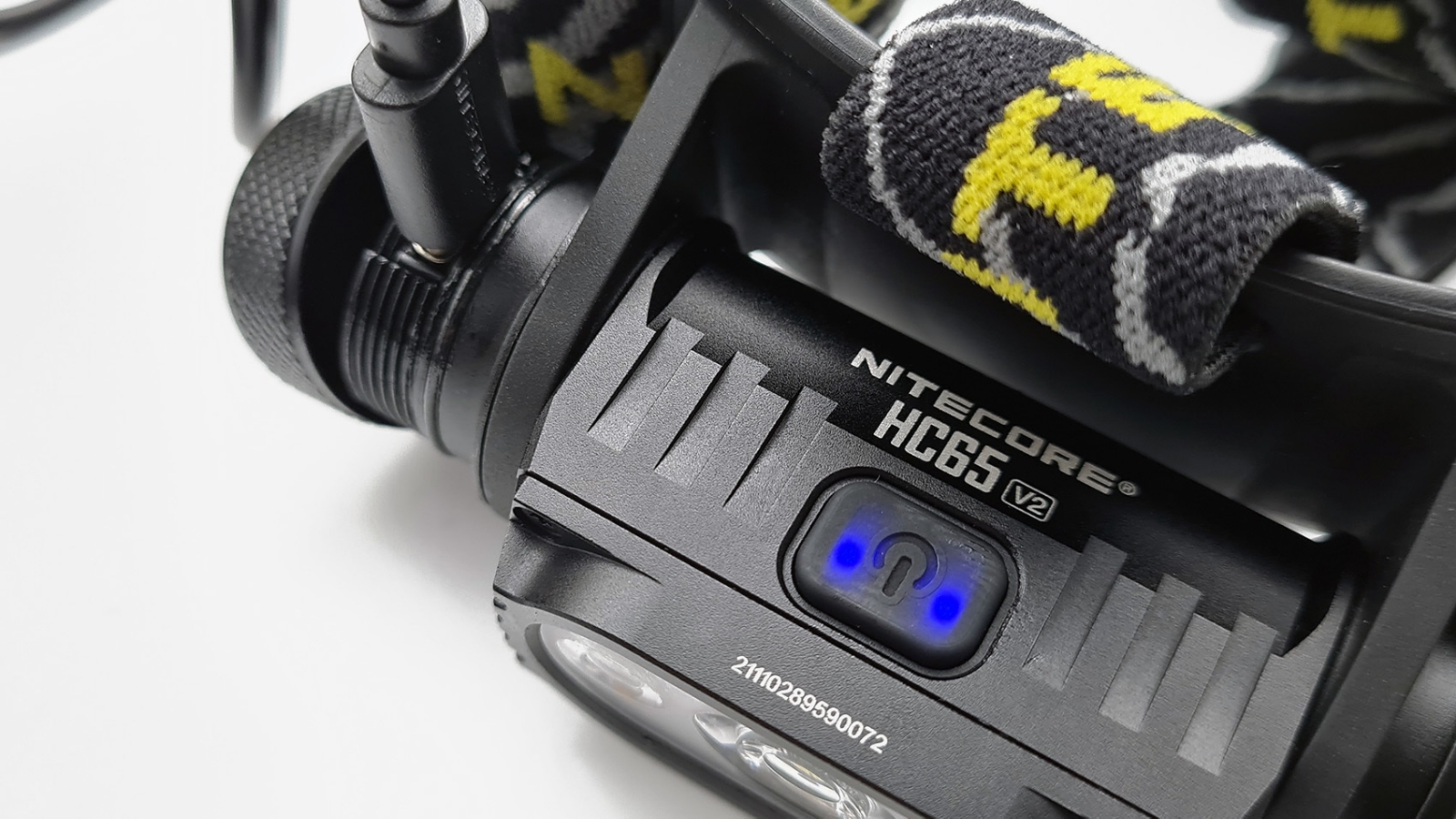 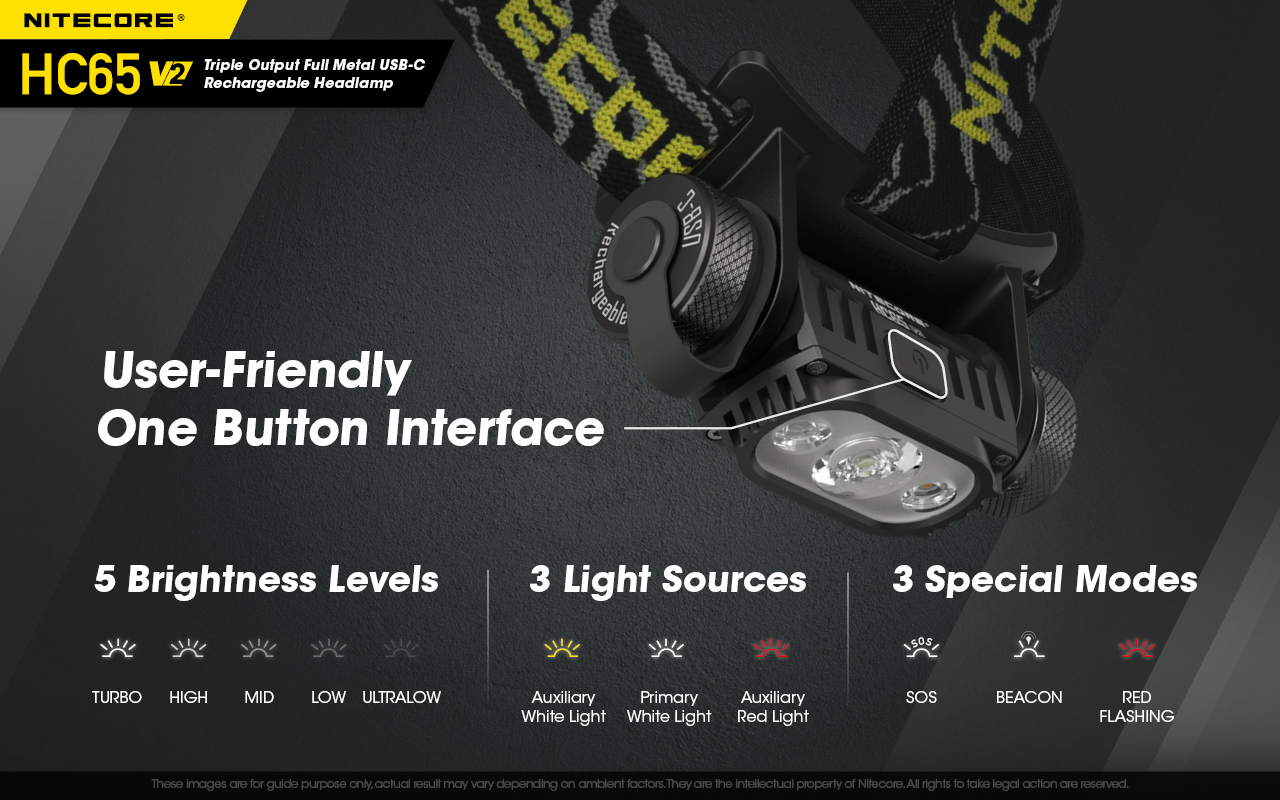 Nitecore HC65 V2 has only one switch for managing the UI (user interface).
The HC65 V2 is equipped with 3 different LEDs.

- The main white light LED, a Luminus SST-40-W has 5 normal levels and 2 special levels (Beacon and SOS).
The setting of the various levels is memorized and maintained even after turning off the flashlight.


For the complete management of the Nitecore HC65 V2 I am attaching the address of the user manual: 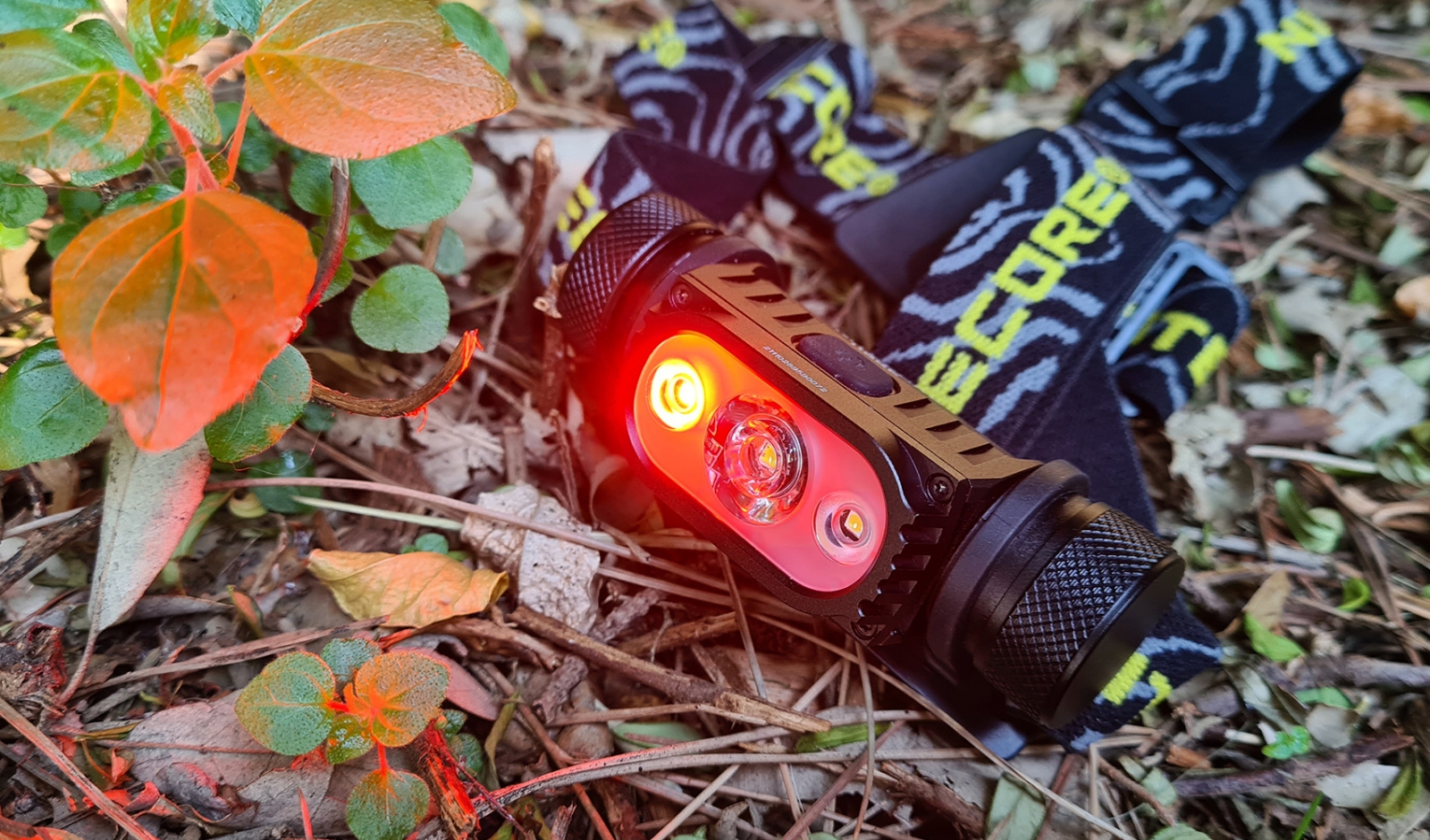 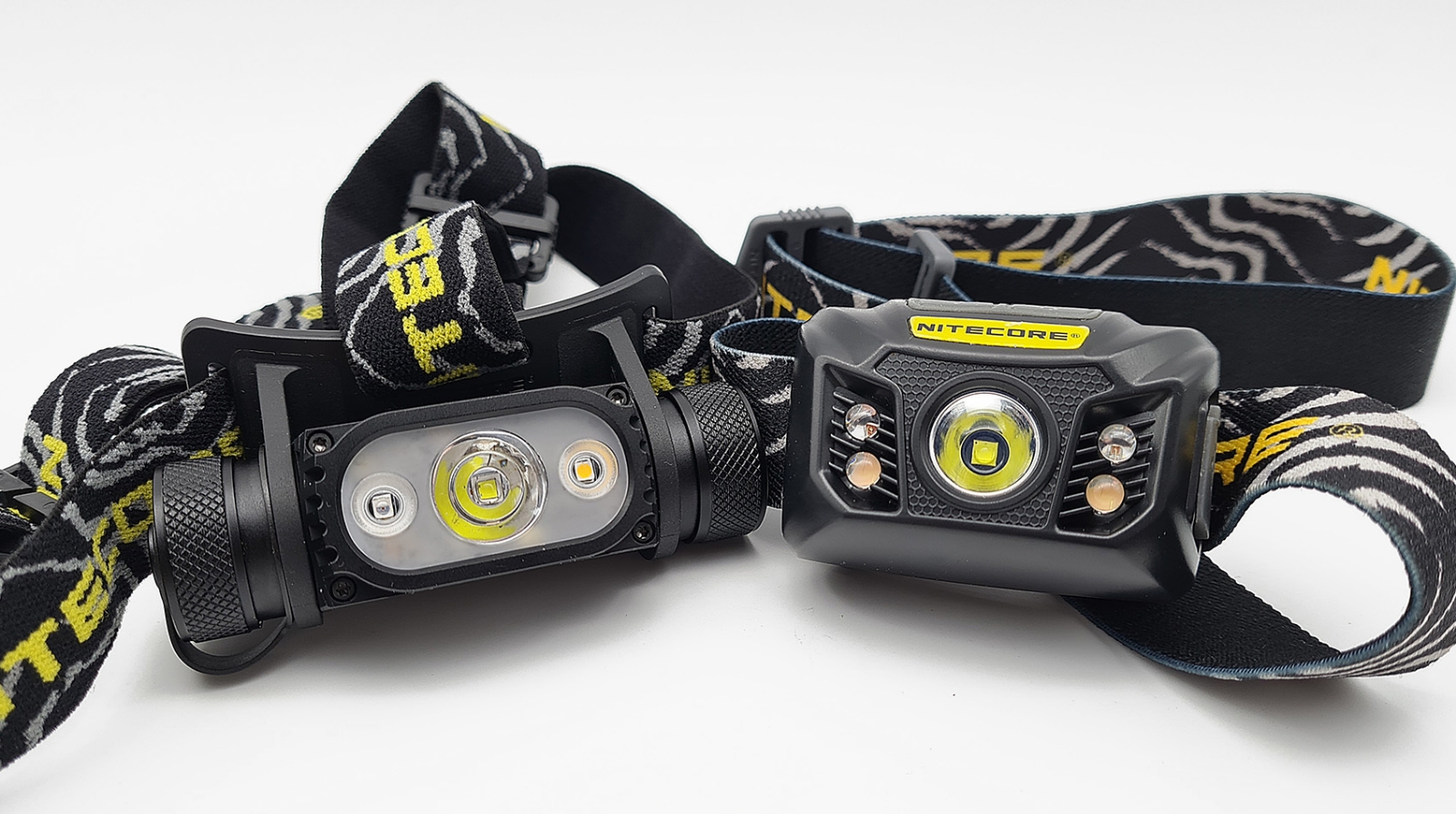 Tested in the field, the HC65 V2 left me impressed by the quality of the beam and the distance reached by it. The headlamp is equipped with a wide-beam flood optical system certainly suitable for a well-lit walk also from the side. The flashlight, with a little force, is easily tilted to find the right personal setting. HC65 V2 has, like the previous one, an auxiliary red light (for hunting or tactical lighting), as well as a secondary high color rendering LED recommended in particular for reading in poor visibility conditions.

The beam has no defects or aberrations and the tint is not particularly cold, as can be seen in the test on the wall where the spot is yellowish (in the measurement made by me it is about 5500K). Using the HC65 V2 is simple, after some practice, even if you only have one button to manage it.
From a test made with the OPPLE Light Master instrument, there are no problems of flicker (flicker) of the beam. 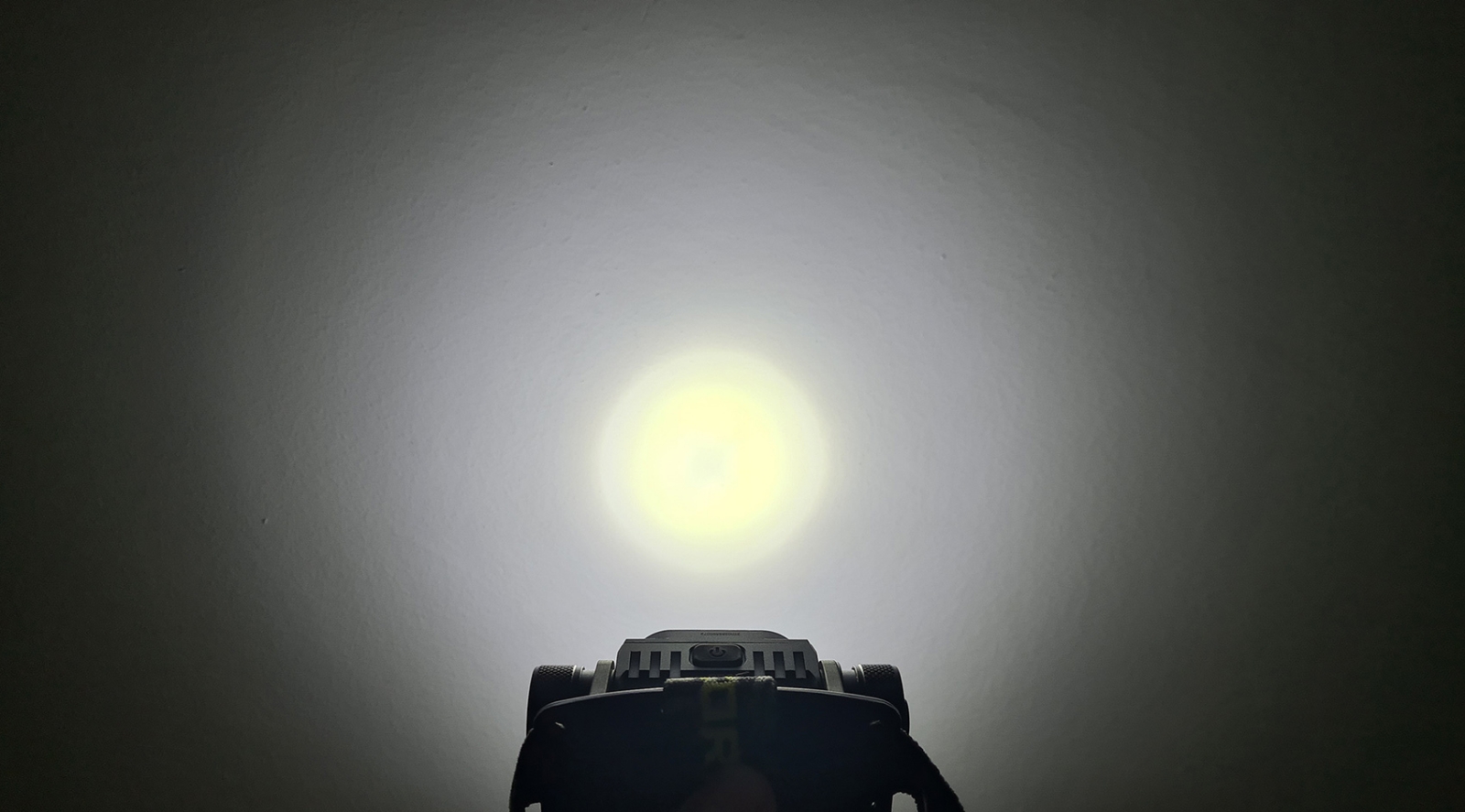 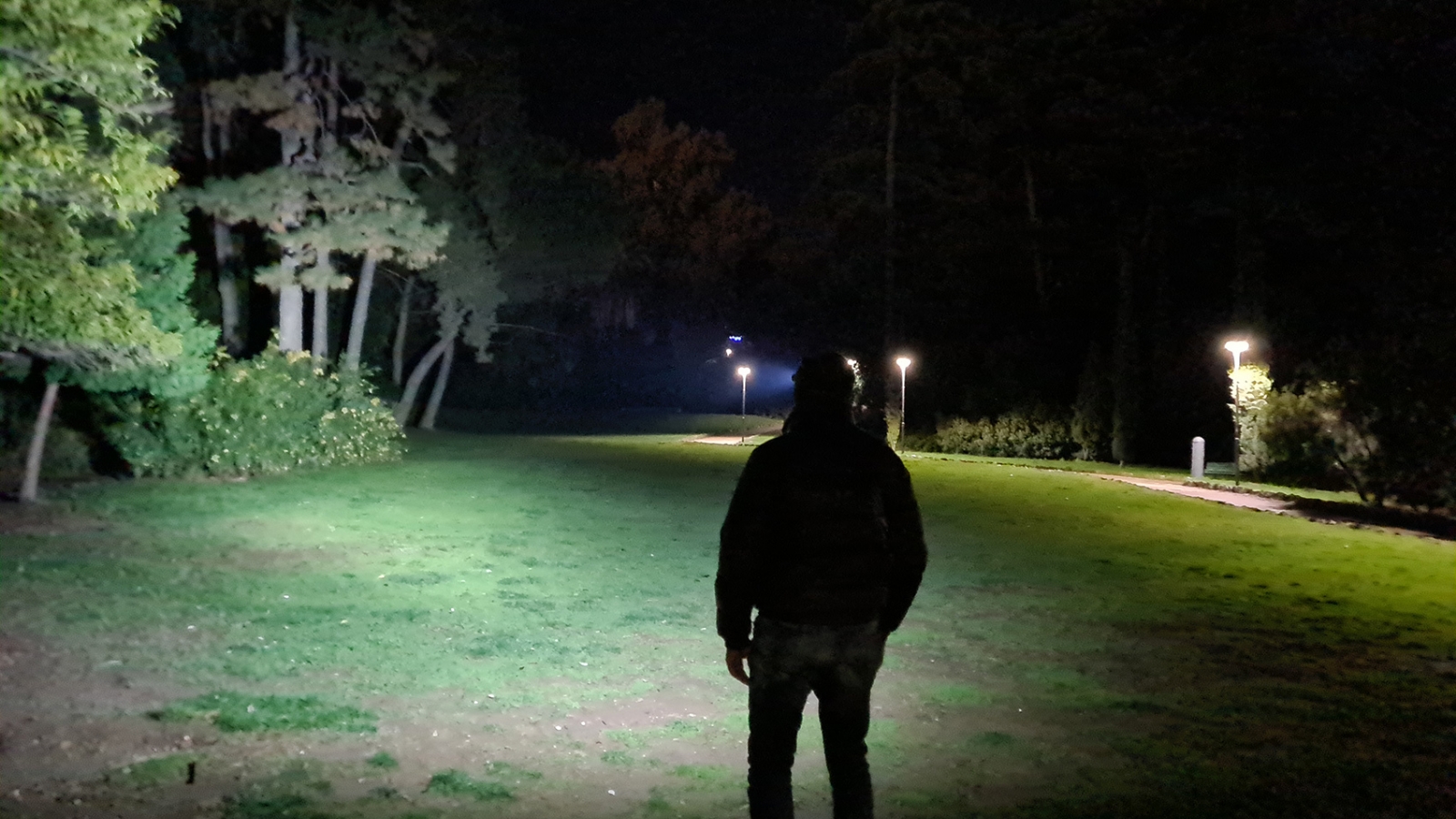 The runtime tests were done indoors using the 3500 mAh 18650 battery supplied with the flashlight.
N.B. The measurements and data collected, having been made with instruments and environmental conditions different from those carried out by the parent company, can be dissimilar.

Nitecore HC65 V2 features ATR technology (advanced temperature regulation) which adjusts the light output according to the working conditions and the external environment to maintain optimum performance in safety.

In the first test the Nitecore HC65 v2 was put in TURBO mode at 1750 lumens.
As soon as it is switched on, the brightness has a constant decline for about 2min. At this point there is a sudden drop up to almost 3 minutes where, after a slight increase in brightness, there is a stabilized value up to almost 1h17m. 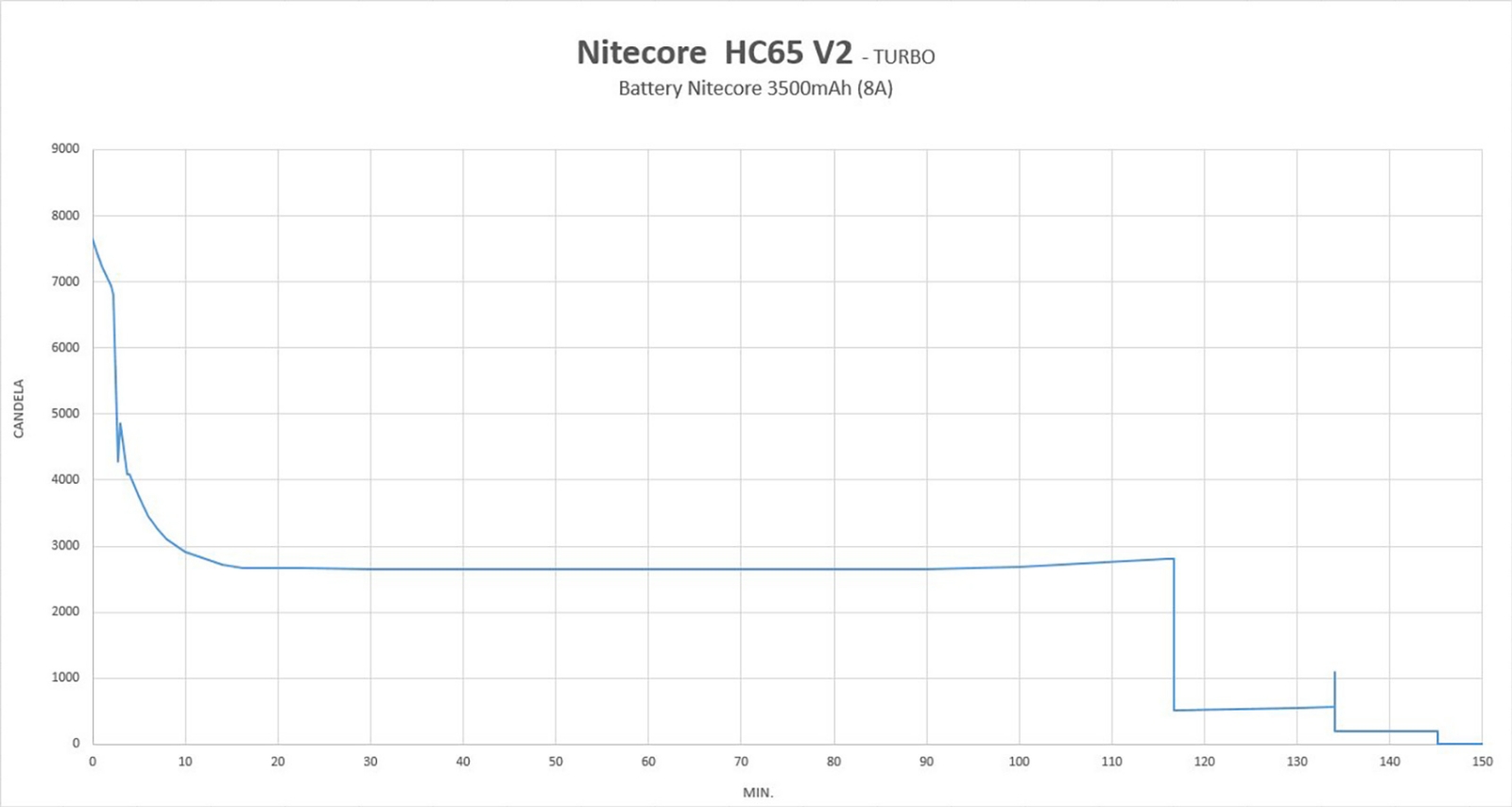 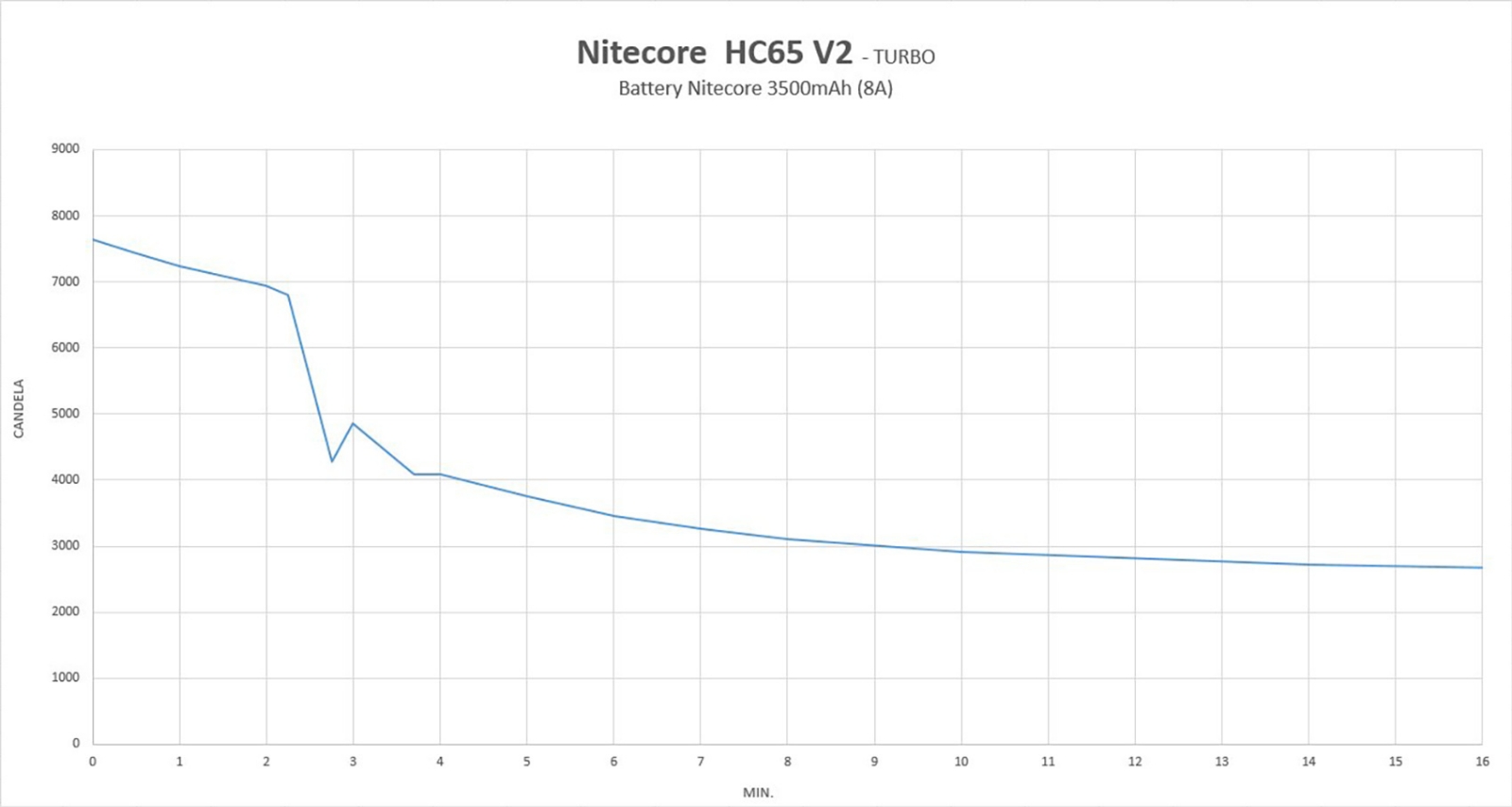 Another test was made with the front set in HIGH mode at 900 lumens. Also in this case the Nitecore HC65 V2 has a good adjustment. After switching on, there is a slight decrease in brightness until minute 7.30. At this point there is a sudden drop in the light output up to minute 19 where there is a steady settlement and a constant output up to minute 135. The data declared by the manufacturer are also respected for the HIGH mode. 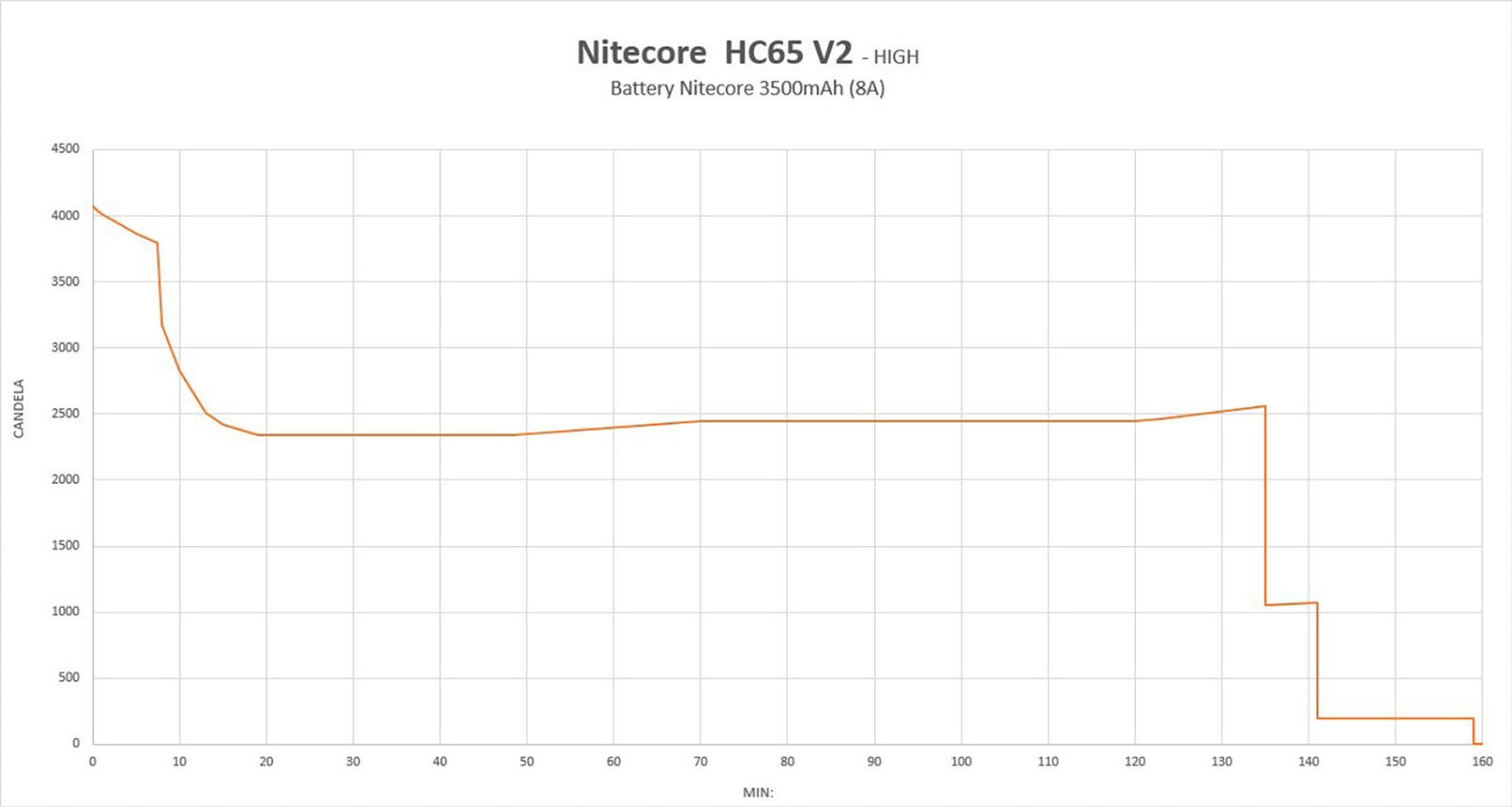 A final test was made by putting the HC65v2 in MID mode at 250 lumens. The curve, as seen from the graph, is almost constant up to over 5h30min. 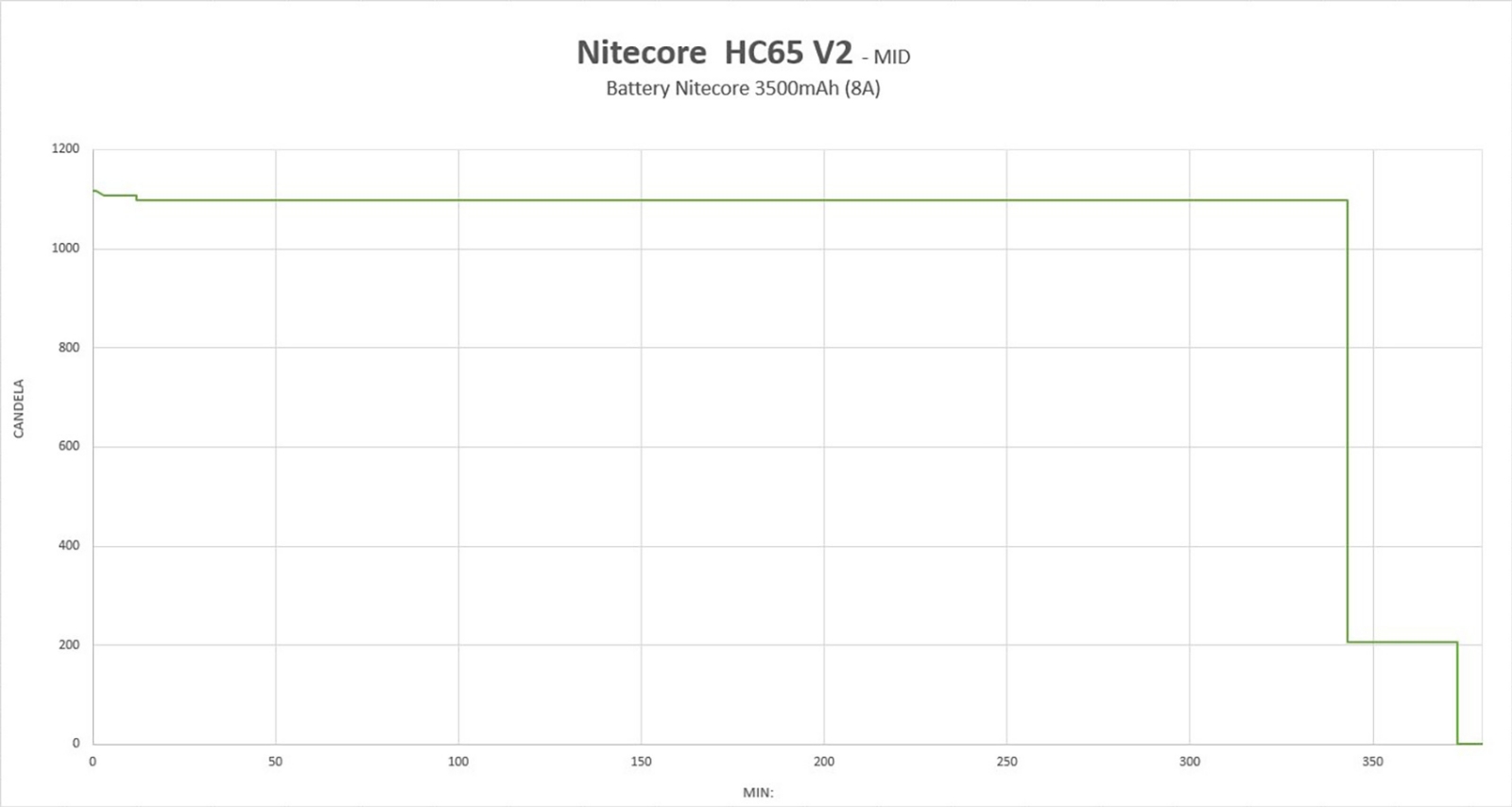 VIDEO Unboxing and use of the headlamp.

Nitecore HC65 V2 is a well built headlamp offered in a complete package, ready to be used. The update of the HC65 brought more light output (1750 lumens) and some changes such as the new USB-C charging interface.
The headband has also been improved, now more stable with more comfort in wearing it even for a long time.
Nitecore HC65 V2 is compact and allows a well-lit walk together with excellent autonomy, it is a flashlight with front lighting system suitable for many uses such as runnung, caving, camping, rescue, climbing and mountaineering.
It is powered by a 3500 mAh 18650 Li-ion battery (included) and can also be powered by other non-proprietary batteries or alternatively by 2 CR123 / RCR123 batteries. Recommended.
You must log in or register to reply here.
Share:
Facebook Twitter Reddit Pinterest Tumblr WhatsApp Email Share Link