TheµMQHO3µ(NC-MQHO3-U) Super Quick charger appears to be a new offering from Sanyo which was first reported by RGB_LED.

Outside of Asia, it's only been found bundled with a version of the Eneloop Family Pack offered exclusively by Costco Canada.

It excludes the Eneloopy tester depicted in these images from thaicharger.com:

The chargers shown in the fourth image are, respectively, the MQHO3, the MQRO2, and the MQRO3.

The pack currently wholesales at Costco for *44.99 CAD, although it's occasionally subjected to an instant 10.00 manufacturer's discount.

The pack originally bore Sanyo part number ECH422, and consisted of these components:

The part number was subsequently revised to ECH4400, and the contents amended to these components:

I believe the addition of the 12 volt DC auto adapter and two more AAA cells more than compensates for the loss of the two C and two D adapters. Especially considering the C and D adapters are commonly available elsewhere, whereas the auto adapter is not.

After spending a few days with this charger, it's my opinion that it (and the trusty MQN05) should replace every other four place charger bundled with the Eneloop in North America.

A handy auxillary cell holder (presumed with some assurance). 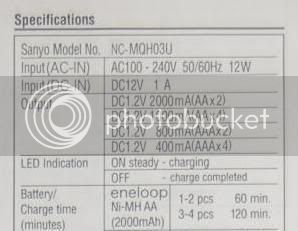 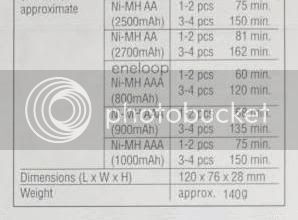 You will note from both its appearance and specifications, this charger could be purpose built for the Eneloop.

The single green charge indicator located below the battery compartment will light when the charger is powered on, and remain lit until the charge properly terminates on all the cells in the charger.

The charger also appears to apply what is probably a 'maintenance' charge following the primary charge cycle. As long as it remains powered on, it emits barely audible pulses that appear to correspond with the number and mix of cells in the charger.

The instruction to place AA and/or AAA cells in the outer postions when charging only one or two appears to be just to emphasize the 'super quick' rate, and is not an operational restriction. You can instead choose to charge at .5C by simply placing at least one of the two cells in an inner position.

However, the instructions to neither insert nor remove cells during the charging process should probably be complied with. It's just prudent to ensure the charger is properly re-set prior to commencing a charge, and thereafter not interfered with while charging.

An image of the complete manual, in two parts, can be found here and here, and it is also hyperlinked to the upper and lower portions of the copy of the specifications.

Finally, respecting its general performance, I found this charger terminates reliably, even when tricked with charged cells; charges to about the same capacity as the MQN05 and/or the MH-C9000 first edition, and seemed to leave my Eneloops comfortably below temperatures I would deem harmful.

Overall, I consider this a solid offering from Sanyo, and even though I would really like to acquire one, the last thing I need is more of the Eneloops and adapters its bundled with. Accordingly, the one I'm using is borrowed, so if there's an observation or test you would still like me to take or to try, let me know as soon as possible.

They're somewhat lost in the first post, but here are the three things you will most probably want to know about operating the MQH03:

If both inner positions are vacant, the outer positions will automatically charge one or two AA and/or AAA Eneloops at their respective 1C rates.

If at least one inner position is occupied, all positions will automatically charge from one to four AA and/or AAA Eneloops at their respective .5C rates.

The green LED will remain lit until the charge terminates on all the Eneloops inserted in the charger.

Very nice. Wish it was available in USA.

It appears that here has definitely been an increase Black Rose, but I still erred in my first post. I just verified that the price was actually 34.79 and not 34.99. That is sans taxes.

Another indicator that the cost of the Eneloop is generally on the rise though.

A heads up for anyone considering the Costco ECH422 pack, which is the only one currently known to contain the MQH03 charger.

As noted in this post by gunga, the pack is also being sold with the Sanyo MQH01 (NC-MQH01U) charger. In fact, they have both been spotted in the same store, so you may even get to choose.

My preference is for the MQH03, but as gunga and others have noted, the MQH01 also has its strengths.

I haven't been able to find a copy of the manual for the MQH03 in the .pdf format, so if anyone else has, please post its URL in this thread.

On a related note, bob_ninja advised in this post that although his pack contained the MQH03 charger, it contained the manual for the MQH01, so it might be prudent to verify that your pack has the correct manual for whichever charger you choose before leaving the store.
B

Thanks for the manual pics
I am guessing that wrong manual is a systemic error and not just a one off.
I wonder if anyone else bought it and found the wrong manual.
In any case between 01 and 03 they are so similar that the old manual is still useful for those who are getting it for the 1st time.
B

Interesting that the manul instructions are to insert batteries (step 2) BEFORE inserting into AC outlet (step 3).
I always power a charger before inserting batteries.

Regarding the heat comment, I certainly can feel some heat near end of a charge. I used non-Eneloops for a 1st trial run, around 2Ah I think.

Bones said:
It appears that here has definitely been an increase Black Rose, but I still erred in my first post. I just verified that the price was actually 34.79 and not 34.99. That is sans taxes.
Click to expand...

Where was the one you borrowed purchased at?

I have enough batteries and quality chargers, but may get one of these just for the quick charger and the adapters.
B

Black Rose said:
Where was the one you borrowed purchased at?

I have enough batteries and quality chargers, but may get one of these just for the quick charger and the adapters.
Click to expand...

Black Rose said:
Where was the one you borrowed purchased at?

I have enough batteries and quality chargers, but may get one of these just for the quick charger and the adapters.
Click to expand...

It was purchased in Calgary, and the price was definitely 34.79, which makes me wonder whether it's a simple pricing error or if Costco Canada engages in regional pricing.

bob_ninja said:
Interesting that the manual instructions are to insert batteries (step 2) BEFORE inserting into AC outlet (step 3).

I always power a charger before inserting batteries.
...
Click to expand...

I have gotten into the opposite habit of inserting the cells before powering up my chargers.

On my MH-C9000, it gives me time to make sure they are properly seated and then given a slight rotation to ensure the best possible contact.

As well, in his informal review of the MQN05 charger, SilverFox encountered a delayed termination when he inserted an Eneloop while the charger was still powered up and charging other cells.

Insofar as I am aware, this is the only termination problem ever reported for the MQN05, and the charger properly terminated its charge of the same cell when it was subsequently inserted before the charger was powered up.

I'm going to presume your issue is differentiating between the two chargers reportedly bundled with the Sanyo ECH422 Family Pack, namely the MQH01 and the MQH03.

The MQH01 is distinquished by an NiMH-NiCD switch on its face. It is also metallic silver in colour and has a single square LED below the battery compartment.

Conversely, the MQH03 lacks any sort of switch. It is also pure white in colour with a single round LED below the battery compartment.

Line drawings of both chargers are available in their respective manuals, which are hyperlinked in post 7.

Here are some high quality images of the MQH03 compliments of Mr Happy and ThaiCharger:

Please note that the 12volt DC adapter depicted in the third image is not included in the ECH422 pack,
but its UL tag indicates it is a Kenic model no: KD-629B.

The chargers depicted in the fourth image are, respectively, the MQH03, the MQR02, and the MQR03.

Hmmmm....so the MQH03 can be used in the car with the appropriate cord....may have to rethink getting one of those.

Other than the ability to charge 4 AAAs, and the car cord capability, what is the advantage of this charger of the NC-MQH01U?

gunga said:
Other than the ability to charge 4 AAAs, and the car cord capability, what is the advantage of this charger of the NC-MQH01U?
Click to expand...

I'm not aware of any significant differences other than those you've already noted gunga.

However, the MQH03 does charge the Eneloop AA and AAA cell at their respective .5C and 1C rates exactly, whereas the MQH01 utilizes a slightly more aggressive rate.

I don't believe the difference in charging rates is of any real consequence though, except as an indicator that the MQH03 appears to have been engineered with specific regard to the Eneloop.

It also seems reasonable to presume that the MQH03 would incorporate updated technologies and, as importantly, take advantage of Sanyo's intimate knowledge of the Eneloop in developing both its charge and charge termination characteristics.

I must also admit a bias towards the cleaner appearance of the MQH03, and the very fact that MQH01 has a NiCD-NiMH switch is fairly indicative that its engineering is getting dated.

But then, if you happen to have some NiCD cells, that little switch gives the MQH01 a distinct advantage over the MQH03 ...
C

I don't think the channels are fully independant. I think they are pairs chared parallel instead of series unlike most paired chargers. This is why you see the two different charge rates. This configuration allows single battery charging at the 2 amp rate or two batteries @ 1 amps.