Hey all, I posted a long time ago asking for parts to upgrade my old 6P, as there doesn't seem to be much if anything on today's market with momentary on only presume switches and no extraneous modes.

You all recommended me the Malkoff drop in which I got but was really disappointed by the very poor throw. At more than 4 times the lumens it still had less than 1/2-1/3 the range just because it was so poorly focused. I posted again about that lol.

Anyway I've been working with it ever since but I've recently been issued a G2X by my company and the very first thing I though was to slap my 6P switch and strike bezel on it! Welp the switch didn't work lol. In fact I messed it up as the switch its self was smashed into the tube of the flashlight body when I threaded the tailcap onto it. Then when I removed the tailcap again the switch was stuck on the end of the tube. Had to use plyers to remove it and now it doesn't seat firmly in the tailcap anymore.

Still works but I have to carefully tip the tailcap onto the back of the 6P so the switch doesn't fall out or otherwise dislodge and misalign. 😭😭😭

In any case I have a new idea to get LED efficiency, with the tactical design of my og 6P, and that is to simply replace the original 6P head with Malkoff drop in, with the whole head of the G26, and again switch out the bezel.

But I don't want a repeat of the tailcap/switch situation so I wanted to ask here if it's even compatible first :/

Also I assume the alternate 15 lumen mode of the G2X has more to do with the head than the tailcap/switch so I'll probably get stuck with that in the process but I guess I can live with it as long as I get my momentary on pressure switch :/

Also. Are there parts available for the original 6P components so I can replace my janky switch without getting stuck with a click on? And if so, where?
E

A quick question, do you have a pic of the 6p switch? If I understand you correctly, if the 6p switch 'fell' out when the tail cap was removed? It was either broken, wrongly installed, or entirely a different switch I'm envisioning. It almost sounds like the it was the early z14 made for 6R that had plunger style switch.

euroken said:
If I understand you correctly, if the 6p switch 'fell' out when the tail cap was removed?
Click to expand...

Of course I'd be happy to help you help me haha

Attached are pics as requested, of the tailcap, switch, also I tiny rod piece inside the switch which should protrude out the back of the switch but which became dislodged when trying to remove the switch from the G2X tube and now has fallen down into the the spring of the switch which at least contains it lol and lastly the switch's rear flange sitting flush on the back of the 6P tube as it should, where as it actually squeezed inside the G2X tube which is what causes all the following problems also lol not pictured because I don't have the G2X with me rn.

Switch problems notwithstanding what of head/tube compatibility between the 6P/G2X???

Got it. That rivet holds the switch in place. I wasn't paying too much into what you are going for in regards to the light 'setup.' Are you open to changing the 6p switch innards with a clicky? Lumens factory makes nice clicky replacement.

If you want to keep the existing switch plunger mechanism (momentary and a twisty), you'll need to push that rivet back in to the 'receiver' that is under the rubber boot. Now that the switch is out, you can unthread the plastic 'retaining' ring left in the tail cap with a needle nose plyer and get to the part under the rubber boot. Here is a disassembly video for your reference.

G2X is NOT compatible with a 6P. G2 is, but not G2X. If you 'can' get the G2X head off the body (I heard in the past it is loctited on there and is quite difficult to remove), you'll notice right away that the threads don't match either. G2X is compatible with 6PX, but not 6P.

Hey thanks for the video! For some reason it's working perfectly fine as is but I'll fix it on principle lol

Of course I want to keep the momentary on, why else would I be trying to switch the 6P tailcap with the G2X which is already clicky?? Also there's no such thing as good clicky. Clicky bad 🧐 lol

Ugh, why? Why do they purposely make things not compatible??

Maybe I can just add a big washer or something to the 6P switch so it doesn't pop into the G2X tube again and switch out the tailcap and bezel like I originally tired to.

God I wish I could disable that second stage activation at 15 lumens.

shipwreck. said:
God I wish I could disable that second stage activation at 15 lumens.

Is there any way I can disable that???
Click to expand... 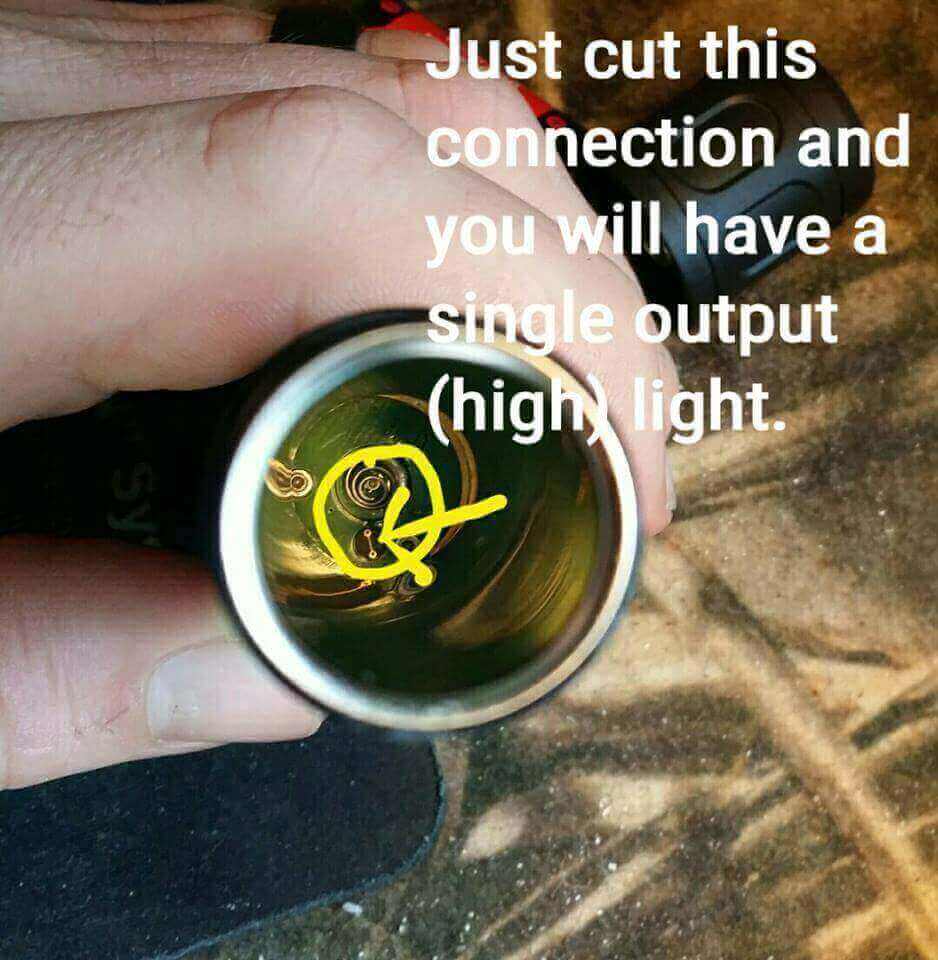 Lately we've been seeing more and more folks (myself included) putting handheld lights on rifles. According to Surefire it's "not recommended" but I personally know several dozen folks that have used a variety of Surefire lights on their rifles for a number of years with zero issues. It's a...

Good lookin' out homie! Too bad I can't do it non destructively tho 🤔
A

shipwreck. said:
Hey all, I posted a long time ago asking for parts to upgrade my old 6P, as there doesn't seem to be much if anything on today's market with momentary on only presume switches and no extraneous modes.
Click to expand...

If you're in the philosophical camp of lights with 'momentary-only' tailcap switches, in case you didn't see or follow it, you may be interested in this recent thread by someone who shares that requirement, and some of the options discussed. There are still some options out there which accommodate those who require that, although the names probably don't start with 'S' any more (SF/SL). The names ASP and Elzetta (and perhaps others) came up:

I'm looking for a flashlight (other than Surefire) with a tailcap switch with momentary on only, meaning the flashlight turns on when the tailcap is pressed and held, and turns off when released. It must not be able to be clicked permanently on, as I walk around with it in my pocket, and do not...

Sportac makes some fairly inexpensive drop ins with pretty good throw that I believe will drop into your 6P. Sometimes on big online auction site there will be 6P tail caps for sale if you need a spare or a new one. I have also seen tutorials on CPF that tell you how to make a Malkoff switch momentary. I think you just grind off a little plastic piece. I had some that were old enough that it wore out and became momentary.

I love Malkoff probably as much as anyone else on this forum. However, Malkoff is not always the answer to every application.

aznsx said:
If you're in the philosophical camp of lights with 'momentary-only' tailcap switches...
Click to expand...

Hey thanks for the heads up! I haven't been on the forum since I was last upgrading my 6P so I missed it. I'm not a hardcore corporate loyalist so I don't care about the name as long as the quality is solid.

And hey, as a matter of fact I'm pretty sure we used Asp dedicated forend weapon lights in the navy! Could've been surefire but I know for a fact our handhelds we're asp taclights. I'm a little surprised though as when I first got the vibe my 6P needed an upgrade or replacement, Asp was one of the first places I looked and I couldn't find anything like what we used in the Navy or anything with momentary on only.

Hey thanks, I'll check out what sportac has to offer! That's a good point I guess I could always just get any light with compatible treads and slap my 6P tailcap on! How'd I not think of that before??
S

Charlie Hustle said:
I love Malkoff probably as much as anyone else...
Click to expand...

Thanks I'll check it out! I mean. Not right now as I'm pulling an overnight in my car right now so I have a heavy blue light filter on my phone to preserve my night vision and can just make out text lmao

A
solarforce accessory compatibility for surefire