instead of doing something serious with my money like going to Ibiza, I put some parts together,
in the beginning there was this lathe and a piece of aluminium:

...later it looked like this, thanks to Piet from Frankfurt:

...and here are all the parts for the whole light together:

...the SST-90 emitters, connected together in series and glued to the
massive heatsink for the modamag 4" Turbo Head:

...the modamag configurable battery adapter with 8x IMR18650 cells, I will use
a stock Mag switch to power this light- not sure, what will happen in use...

This current I measured with 8x AW IMR18650 cells fresh from the charger, I wanted to get
nothing more but 9amps for 8x 2250 lumens = 18.000 lumens, but I got this, my camera had
some problems to take the photo, down left is the heatsink with the working SST-90 emitters.
I hope some resistance will be added when the flashlight host and the switch will come
in between and current will be reduced...

Avenue with trees, light up by my car with 2x H7 on high:

Same Avenue light up by the "Fat Star" (without help of carlights):

Beamshots with new reflectors:
To have any comparison to the Ledil reflectors, I took new photos at the "Holiday Inn", controlshot:

...please excuse blurish quality, I could only take one beamshot, then some security from the hotel showed up and asked me "friendly" to leave...
"Fat Star" with new reflectors:

...a street close to my home at night:

...and here is the video: FatStar

Thank you for watching & best regards from Frankfurt,

Holy cow, awesome build you got there.

. I wonder if the head will glow to red after running it for minute(s)! :naughty:.

13A through that I'm guessing 18 gauge wire in the head?
Loord...something will be red, just not the heatsink of the batteries [they are red to begin with :nana:]
P 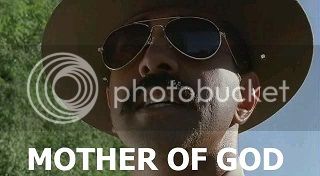 INSANE!!!! :goodjob:
Now if you could make something like that for a motorbike......

I can't wait to get home to see the pics you have posted. Internet at work does not allow me to look at pics.
P

Overdog, I like my steak medium rare. 30 seconds per side please.

At 12 minutes of runtime it won't heat up much I guess.

What is its mass?


ahorton said:
At 12 minutes of runtime it won't heat up much I guess.

What is it's mass?

It will heat up very very quick

Holy cow! this is awesome work!

You've told me about it before but I never expected your were building a flashlight with those SST-90s
Nice one!!
Last edited: Aug 17, 2010

wow, can't wait to see beamshots.. you're gonna need a taller building!
I

wow. you can light up a whole football field with that thing.
S


irv_usc said:
wow. you can scorch and burn a whole football stadium with that thing.
Click to expand...


Fixed that for you.

Holy nice build! I am curious, though, stock mag switch? 18G wires? Will they handle this?
Is there a low beam, like 6000 lumens or something?

Doesn't it feel good to be there, on top of that hill?:twothumbs

V
How to remove star
2