I received the TK monster today from a friend who had just arrived from the States.
The package was brought back unopened from the original sender. I inspected the 8 green 18650 batteries that came with the light to check what kind of charge they were in. 4 of the batteries were at 100% and the other 4 had no charge. I charged the 4 batteries and came back to them shortly after to find them charged already. I carefully placed the batteries back into the light observing the polarity.
I powered up the light on low for a few second and it worked fine. I left the light to rest since it was still bright outside figuring I would save the surprise brightness for when it got dark.
Around 2 hours later I brought the light to my balcony. Low powered up with one push of the button. I waited 20 seconds before I pressed it one more time to bring it to the next level. Im not sure how long I waited till the next push because the next few minutes happened so fast.
Shortly after (maybe 3-5 seconds) being on high, I heard something in the light begin to sizzle. I felt a shock like a small explosion within the light. I dropped the light and as soon it fell on the floor it sounded like loud firecrackers popping. I jumped onto the bench to cover myself. There was one loud boom.
When the smoke cleared, I was in shock with so much glass around me. I inspected myself and found blood dripping on my left leg above the front side of my ankle, 1 inch cut on my left arm, 1 inch cut on my right side chest all caused by the shrapnel from the explosion.
Inspecting site where the explosion happened. The rocks on my balcony (where the light was dropped) parted from the explosion leaving an imprint. A few parts of the light were barely distinguishable. The actual light was launched from my balcony. Im writing this a few hours after the incident so I still have to look for the actual light tomorrow. I will upload pictures of the actual parts as soon as find it.
In the pictures you can see that the explosion was very powerful to dent the railings of the sliding door. Crack 3 panels of glass ¾ inch thick. Send glass shrapnel flying to get imbedded in a cement wall.
Im not blaming anyone for what happened especially Modamag and the seller of the light. Im putting out this thread to get insight on what went wrong and to make sure it doest happen to anyone. I knew this hobby is dangerous for the wallet but never to ones life
In the end, the light was expensive but the damaged it caused will cost alot more. Im just happy that I got out with minor cuts. :twothumbs 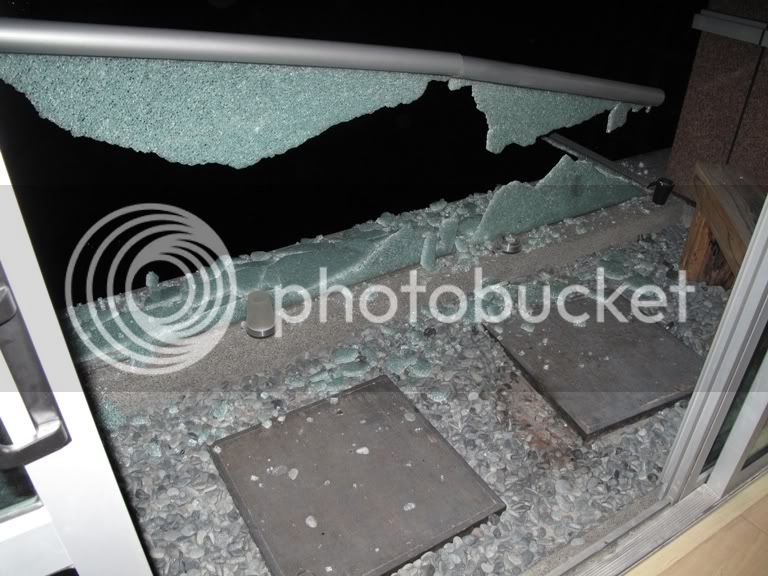 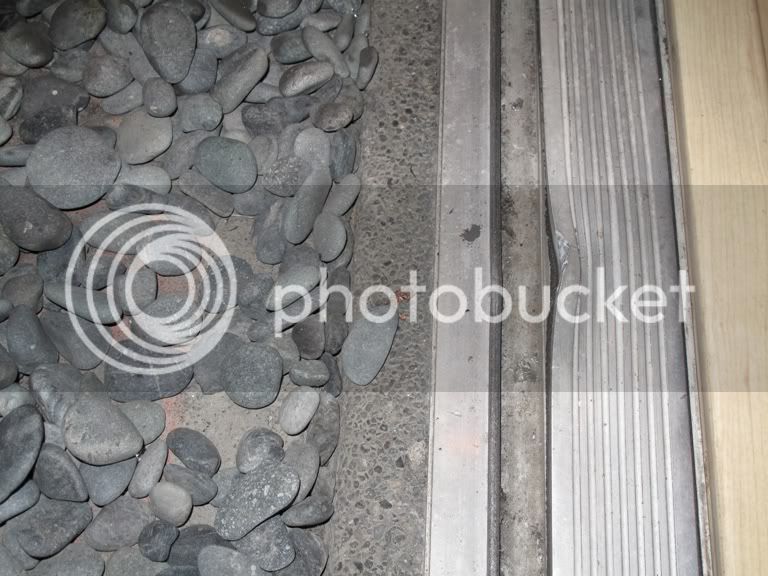 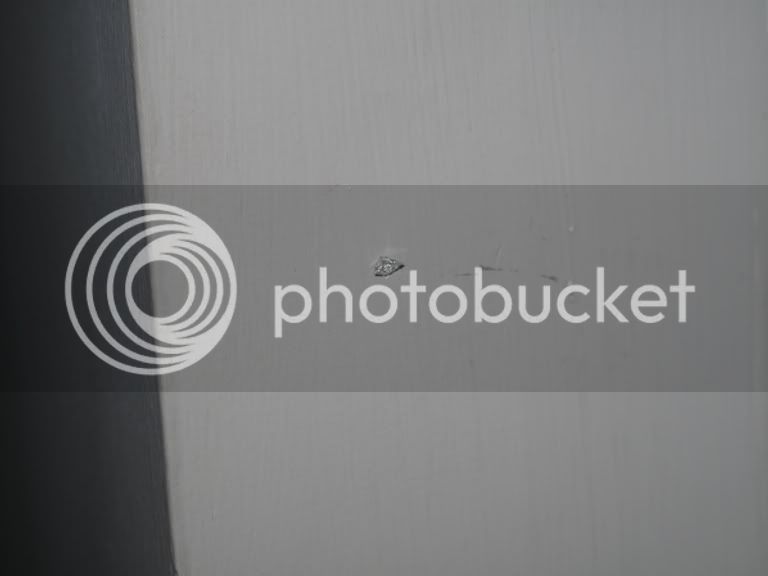 Oh my!!
I'm glad you are (mostly) OK and that this was outside, so the fumes likely quickly dispersed. I am sure the battery safety experts will be in shortly to try to figure out what happened.

That looks brutal. Could have gone much worse judging from the piece of glas sticking in that wall. I'm happy that you only got cuts and no bad injuries.

I guess when the light is found we'll know more about what happend.

Holy moly! That could have been nasty if that explosion had happened in in your hand. I'm glad you are okay!

What batteries were you using? Were they the cells that I see included with the light in the TK monster thread? I thought those were supposed to be safe.

Wow, those batteries pack quite a punch. You basically had a pipe bomb there.

I like your attitude about this. The main thing is to analyze the parts you can find and try to figure out what happened so that it won't happen again to someone else.

Obviously there was a short. WOW! I'm interested to hear what some of our CPF battery experts will say. Bad cell? uneven charge pushing a cell to pop?


I wonder if some bad cells got loose in the world, alot of mishaps this last few days.
Last edited: Feb 18, 2010

its what a call

Glad you are ok!

Can you take a shot of the light and the batts.... or whatever's left of them?

Lesson learned, listen for sizzling and fling light out like it's a live grenade.

Thanks for the concern guys.

Speaking of fumes, the entire house was filled with smoke. My wife ran out with fire extinguisher not knowing what happened.

I just tried looking for the light on the ground floor but couldnt find it. I live on the 33rd floor so the light must have been propelled to the empty field across the street. With the looks of the dent on the railing, it must have gone far:thinking:

I was looking at the TK Monster thread and saw this prophetic post,


CaveDude said:
Okay folks, we've got a new TKM owner here! This thing is the very definition of madness! I swear every time I load this thing up and flick it on, I feel like I'm touching off a bomb :devil:

Not meaning to impune the maker of the light at all.

It seems a battery malfunction is the likely cause, not this kick-butt light. I just thought the post was topical, and Ironic.

I never saw this build before, but batteries aside, that is one sweet light!. I'm SOO sorry for what happened to you. It's quite frankly scary!


PsychoBunny said:
When you first turn it on, does it default to high, or low?

P.S. I assume you are using protected cells in this thing?
With 8 li-ions, you could have one heck of a pipe bomb!!
Click to expand...

Question to the experts, for worst possible scenario of utter battery failure like this are Nimh's generally safer than Li ions? Would they explode with that much force (hoping not)? What are the safest types of batteries that still perform well for our purposes?
Last edited: Feb 18, 2010
R

Yet another reason to be satisfied with my single cell 18650. The shard of glass in embedded in the wall- is that from the lens? It looks very different than the tempered safety glass from the balcony. Your theory of the light "venting"

, propelling backwards into the aluminum threshold of the sliding glass door whilst denting it and richocheing forward may be correct.:sick2:

What batteries were you using? Were they the cells that I see included with the light in the TK monster thread? I thought those were supposed to be safe.

I used the batteries that came with the TK light.


Databyter said:
I was looking at the TK Monster thread and saw this prophetic post,

Not meaning to impune the maker of the light at all.

It seems a battery malfunction is the likely cause, not this kick-butt light. I just thought the post was topical, and Ironic.

I never saw this build before, but batteries aside, that is one sweet light!. I'm SOO sorry for what happened to you. It's quite frankly scary!

Question to the experts, for worst possible scenario of utter battery failure like this are Nimh safer than Li ions, would they explode like that? What are the safest types of batteries that still perform well for our purposes?
Click to expand...

Honestly, I didnt know it could be that dangerous.

:eeksign: Glad to hear you're OK albeit with minor injuries. It definitely could have been much worse with all that glass flying around!
I used to collect knives but kind of backed off a bit because I figured those things were dangerous.....:thinking:
H

I'm sorry to hear that and very very glad you're ok and nothing worse happened!


dcaprilia said:
4 of the batteries were at 100% and the other 4 had no charge. I charged the 4 batteries and came back to them shortly after to find them charged already.
Click to expand...

When batteries get charged or empty clearly faster than you expect them to thats always suspicious! It's likely that they have an increased internal resistance and should be recycled.


@ databyter: NiMH batteries (especially strong ones you want to use in high powered lights) can also produce extreme heat when short circuited, but won't explode as far as I know.

dcaprilia said:
I used the batteries that came with the TK light.

Honestly, I didnt know it could be that dangerous.

I couldnt tell if the batteries were protected or not. They were color green and it said 18650 on it. There were words but I didnt notice a brand or if it said protected or not.
Click to expand...

Thank goodness you are OK, you did the right thing by clearing out of there.

The only green 18650 cells I have seen are Sony....
On your cells is the -B end open like the pic below? Or does the heatshrink wrap around the end?

If the -B on your cells is unwrapped like mine, there is a chance the cell can short -B to +B through the body tube.

You said half the cells had no charge. You should have tossed those in the recycle bin. There is a higher risk of an internal short when the cells are depleted that severely. ~3.25V is the lower limit for these cells.
Last edited: Feb 18, 2010

Wow, glad you came out of it relatively unscathed. What did your neighbors think/say?

Unbelievable what happend but glad you are o.k.......


Regarding to this thread:

YIKES! Glad to hear that your okay. That's exactly why I'm staying away from Li-ion based cells.

33rd floor? I'm guessing that you live in Makati or the Fort area. I would gladly help you look for your light tomorrow if I was in Manila.
Hope no one in the area was hit on the head by your light, that would leave a mark! ouch!
L

Yet another e-cig explosion