Anyone with experience with and/or comments on either or both of the following flashlights?

Despite the 1k difference in lumen output, the Fenix has a battery indicator, which is a big plus for me. I didn't see that for the Nitecors but maybe I missed it. Also, I've read in the past that Fenix may have a better reliability record. FWIW, all lights use 5000mAh batteries: the 21700 for Fenix, and NL2150HPi for the two Nitecore lights...if that makes any difference.

Thanks for any input.
S

We do have a power indicator for P10iX and P20iX. Please check the screenshot below from the manual. 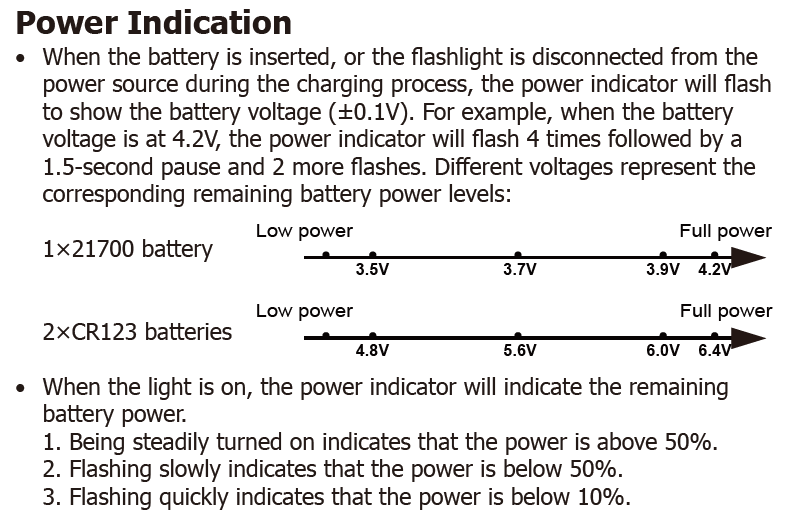 I have a Nitecore E4K and a MH10 v.2. Those lights you are asking about have two battery level indicators, as do mine. One is a quick running indicator to give you a general idea of how much power is left while the light is in use and turned on (over 50%, less than 50%, less than 10%). The other is a voltage tester activated after inserting the battery and screwing on the tailcap. It will flash up to 4 times for 4 volts pause then flash another 2 (.2 volts) for 4.2 volts if the battery is charged. The Nitecore lights have batteries rated at 15 amp discharge while the Fenix is rated for 8. While the rated capacity is the same (5 amps), the batteries are different. Fenix uses a regular protected 8 amp discharge button top cell. Nitecore uses a proprietary 15 amp discharge rated cell with both terminals on the positive end and just negative on the negative end. The battery will work in non-proprietary lights just fine, but regular 21700 batteries won’t work in the Nitecore light. It’s important to understand this if you plan to get other 21700 lights or other 21700 batteries. If you go with a Nitecore and need an extra battery, it’s good to get the magnetic lantern kit (battery, charger/usb power bank, 80 lumen high cri lantern, $35).
You must log in or register to reply here.
Share:
Facebook Twitter Reddit Pinterest Tumblr WhatsApp Email Share Link