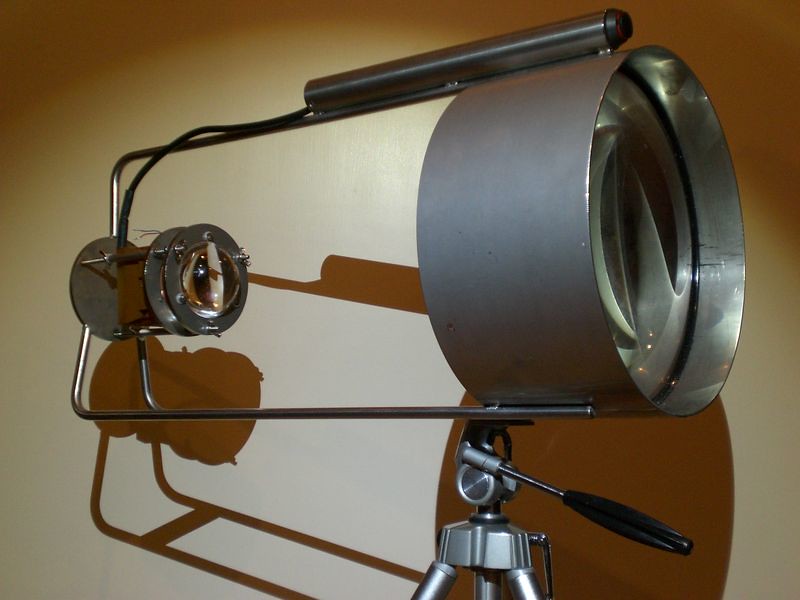 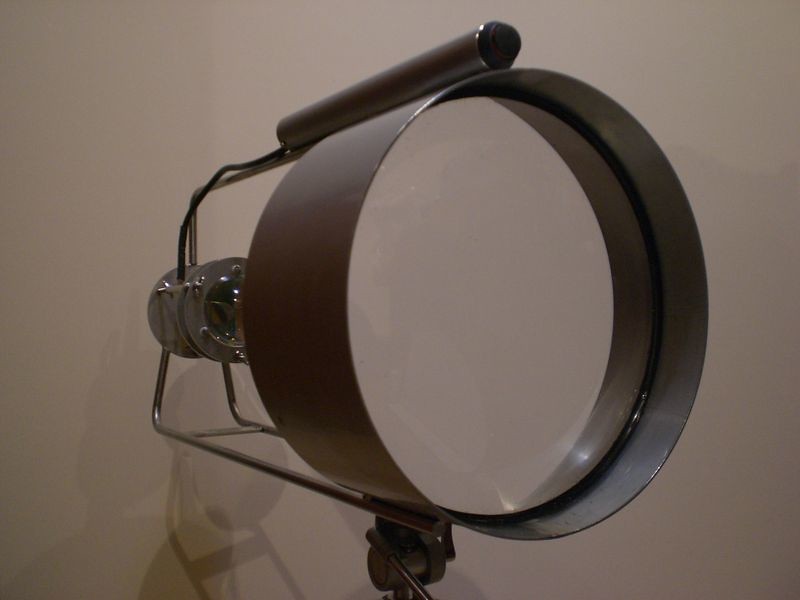 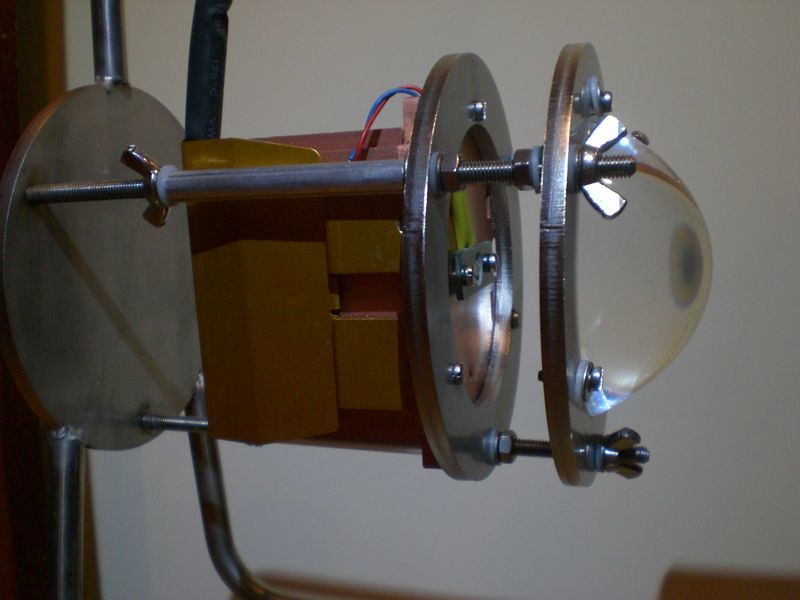 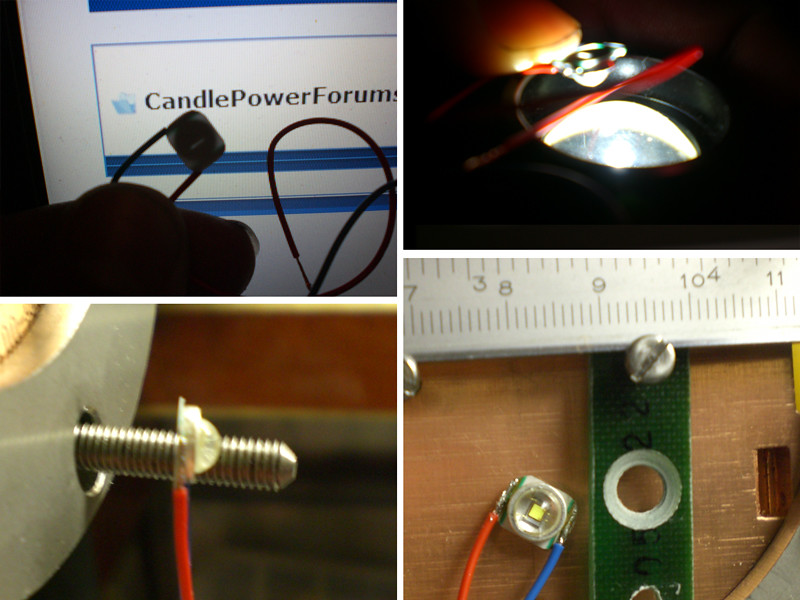 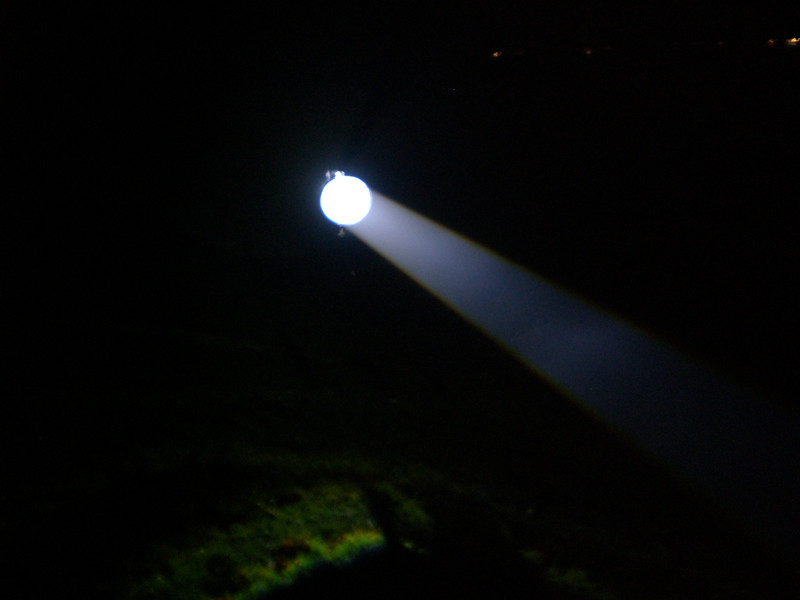 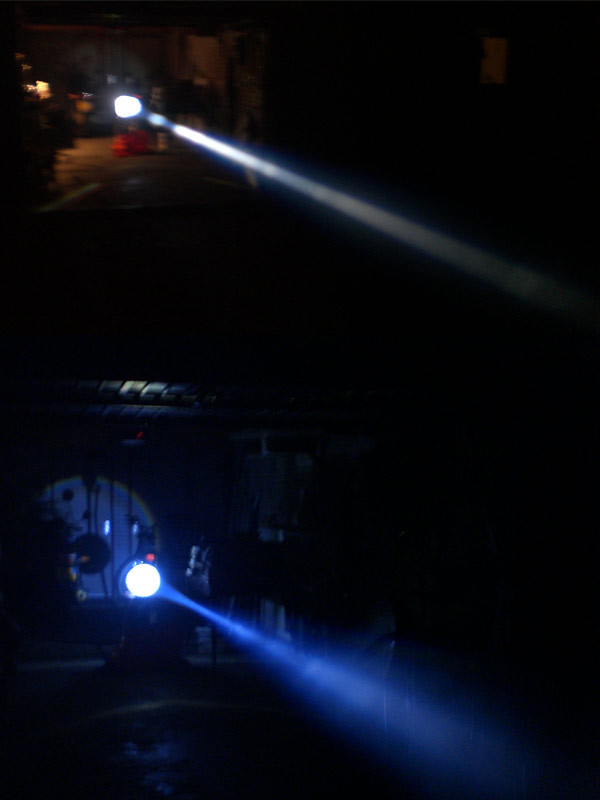 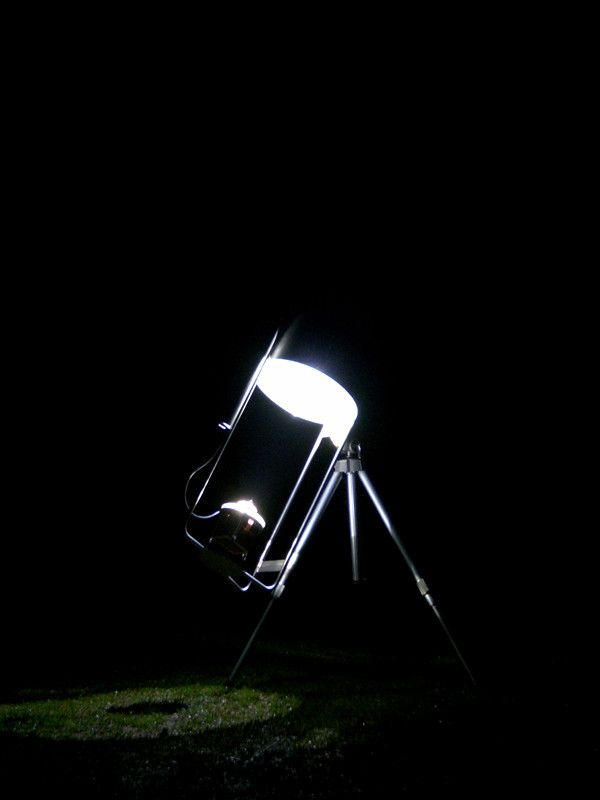 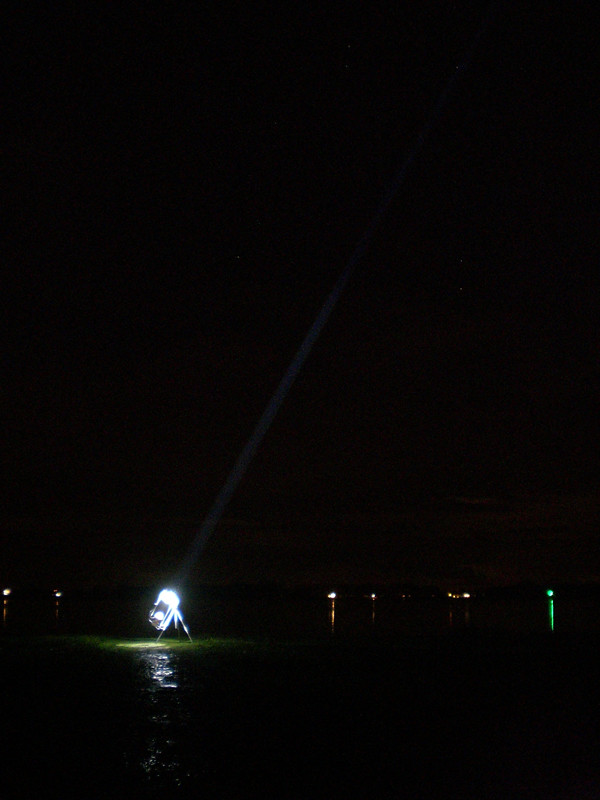 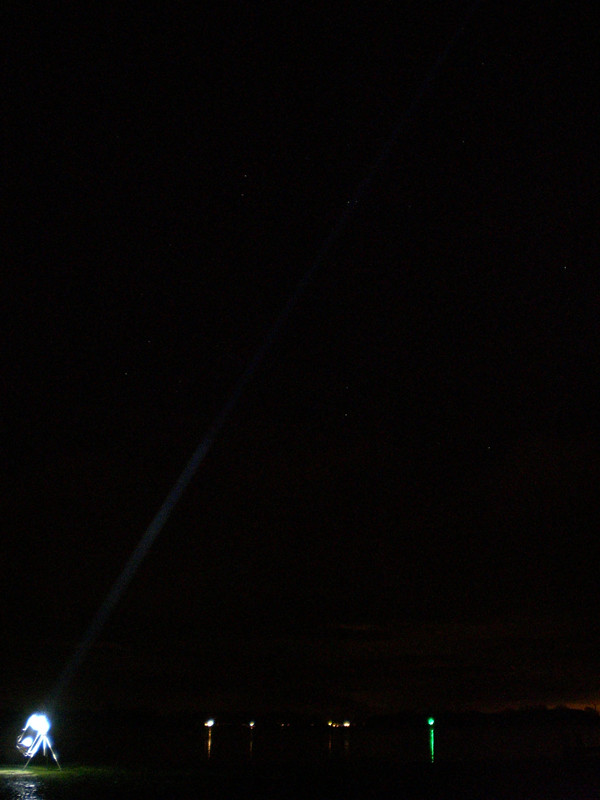 (To get consistent Lux measurements a distance of at least 25 meter was needed.)

Reading inspiring threads at CPF, I thought, why couldnt I do what they can...? Naturally I bought some stuff that didn’t work, call it Research and Development, but I learned a lot and it was a great pass time.

I read about materials for heatsinking and heatpipes, white led tests, aspherics, data-sheets, focal lenghts, f-numbers, telescopes and beam expanders, drivers and batterys. In my search I found more explicite help from several members that answered some questions, and I thank them for their helpfulness. I like to share my findings, as the best members of CPF do. As soon as I understood how Led's work with aspherics, I had the concept thought over, it took me some longer to have the details right. It was good hobby-time, and am satisfied with the result. For me the fun is not only in the result, but in finding my way to solutions.

This might be the World's most powerful single Led-light at this moment, but only because I don't know of any equivalent beast.

The first lens, close to the Led, captures most of the light sent out by the Led. Due to its short focal length, it captures a very reasonable part of the emitted lumen.
This light is dan forwarded, and narrowed down, to enlight the full diameter of the big lens.
This big lens magnifies the brightness of the Led for every square mm2 of its surface, which is accountable for the throw.
Due to its long focal length the outgoing beam has a somewhat narrow angle.

This double lens set-up uses the principle of a beam expander as used in Laserlight technology and eyepieces.
A single lens would be more efficient for throw, but worse in lumen, in practice I find this the best of both and most cost efficient in case you have a large lens at hand and want to utilize it. The beamangle is a result of the two lenses, in combination with the size of the led's light-emitting surface.

I used the 5 dollar Cree XRE R2, for two characteristics:
Because the light-emitting surface, the 'die', is small, the die has the highest relative surface-brightness (intensity) of commonly available and known Led's.
It projects its light in a smaller, more condensed cone than other led's, sending more Lumen in the first lens.

Naturally, in time I will ugrade this Led once there is a Led that’s even more sweet.
The Led-base is sanded down to 0.1mm to minimize thermal-path to the heatsink, -thanx to Ra- pressed to the heatsink with thermal paste.
The well ventilated heatsink, copper for best properties, open structure for best airflow, a bit over-dimensioned to be on the safe side.
It still gets warm so I should ad a fan to it.
I used AA-batteries as I wanted it to be powered by batterys people are familiar with. I could have done with a single and smaller battery of other chemistry.
Direct drive give's higer Lux-readings, but readings would fall rapidly after a few minutes as the voltage of the batteries get lower. That’s why I choose to use a driver, so the light output is constant for a longer time.

Huygens Wiki - This light is named after Huygens, a Dutch scientist from the 16th century, kown for-among others- his telescopes. He enhanced the principle of using two converging lenses in row to reach collimating, a simple assembly for getting a short focal-length and a narrow beam. Quite useful for our use with Led's and aspheric condensor lenses. Huygens build tubeless telescopes up to 62 metres length, to be the first to tell you Saturn has a ring around it. The same principle is still used in telescopes and microscopes and binoculairs.
The tubeless design, and his urge to improve, with hands-on experiments, appealed to me, hence the name for this steampunk-tech-style.
Last edited: Jul 16, 2011

All pictures made with pocketcamera Casio Exilim posted at wk_cpf @ flickr.
Brightness adjustments may be needed depending on your monitor. 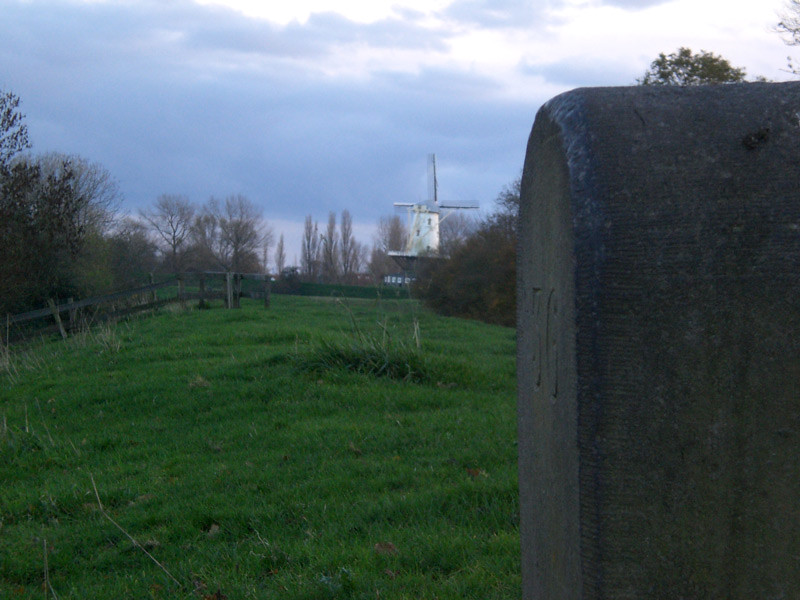 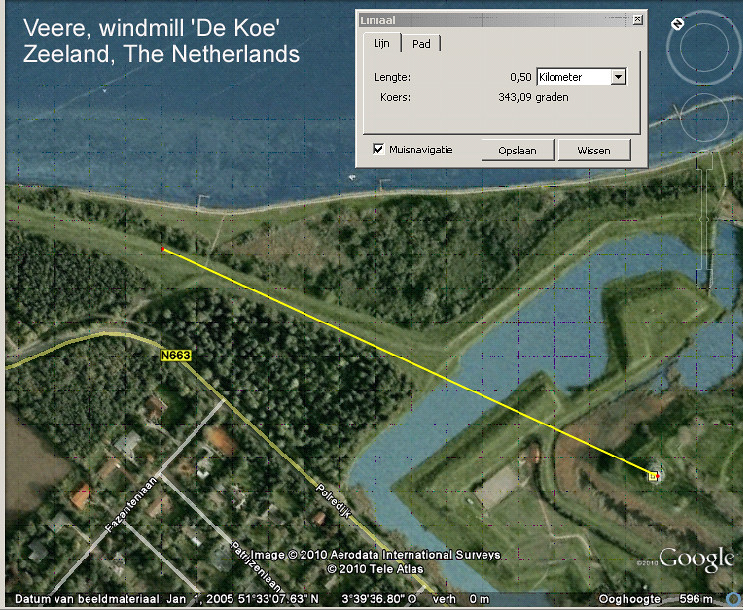 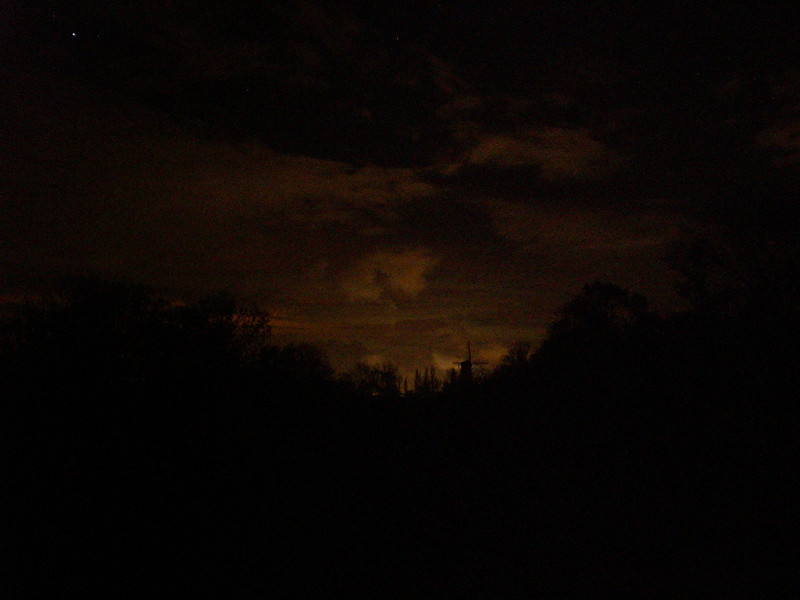 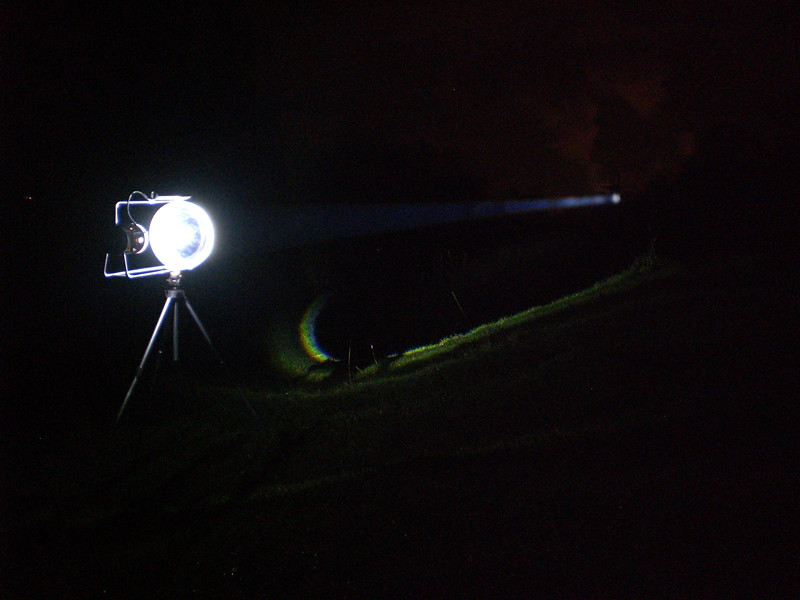 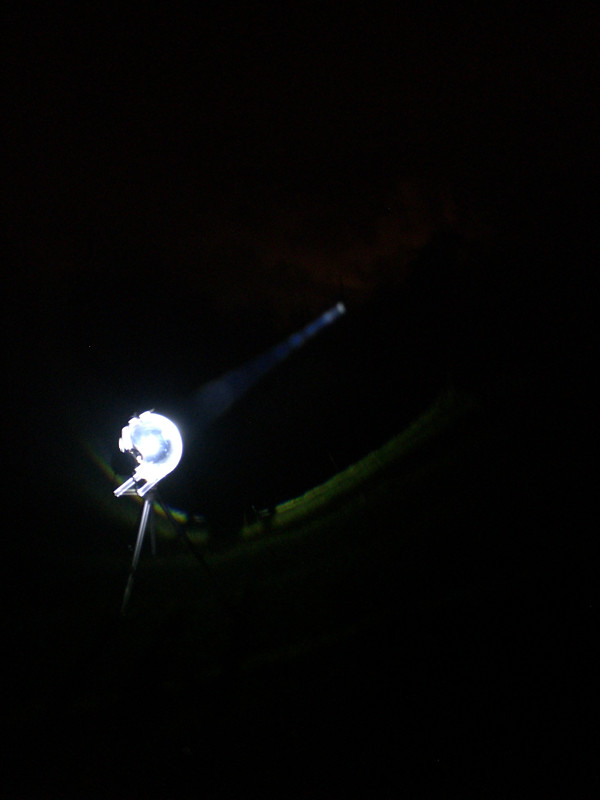 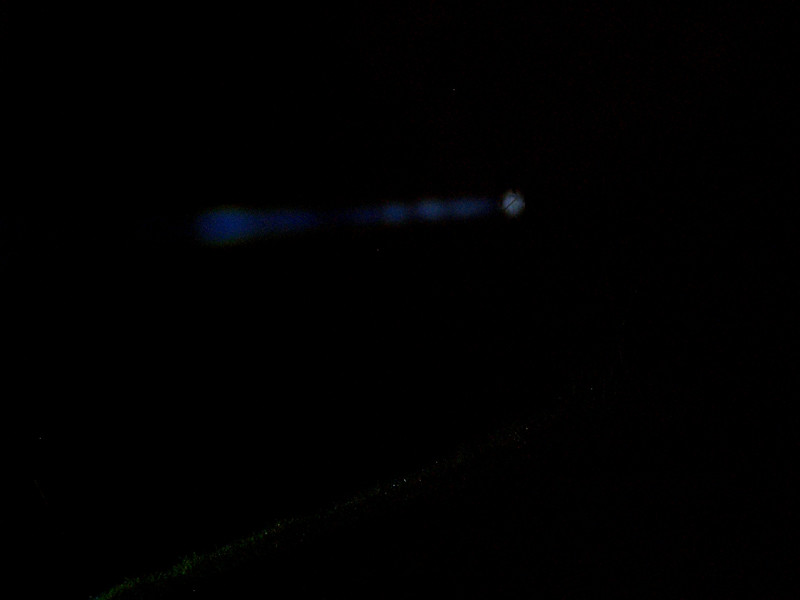 The following beamshots are taken at Neeltje Jans, a concrete (spare) pillar of the dam, aproxx. 25m wide, distance is 565 metres / 617 yards distance. 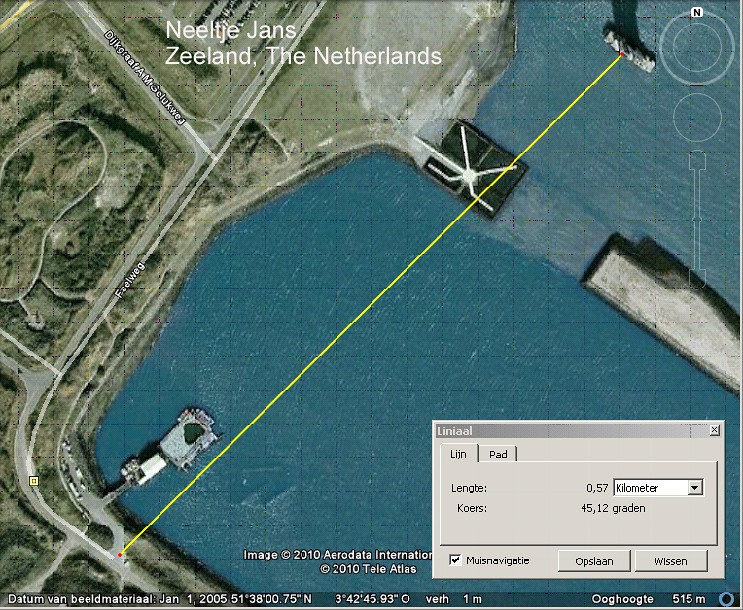 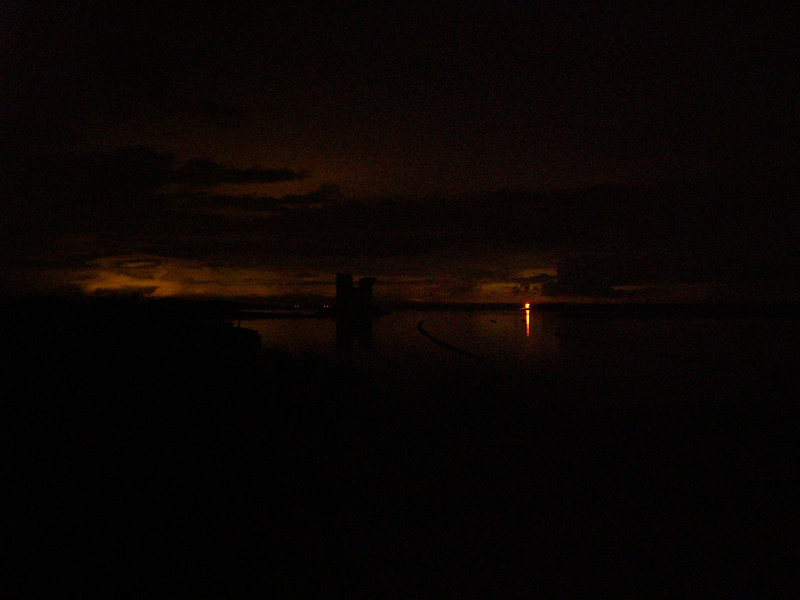 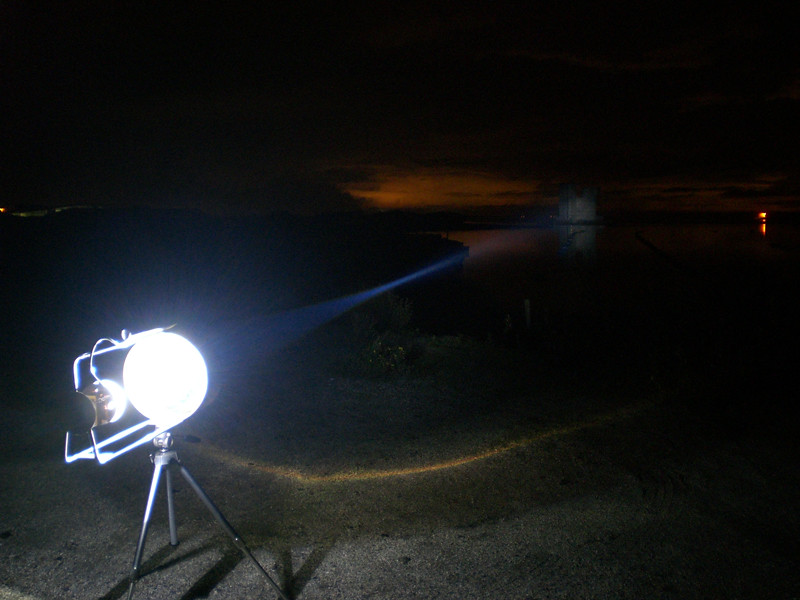 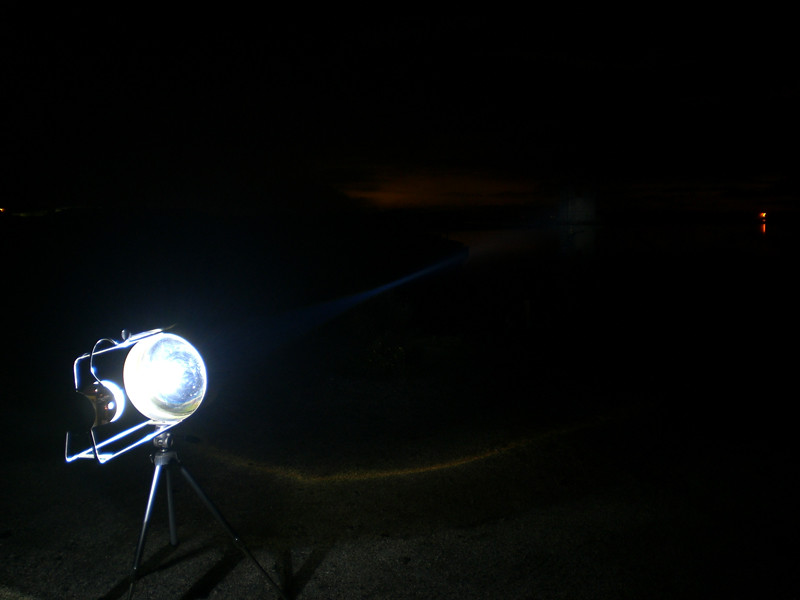 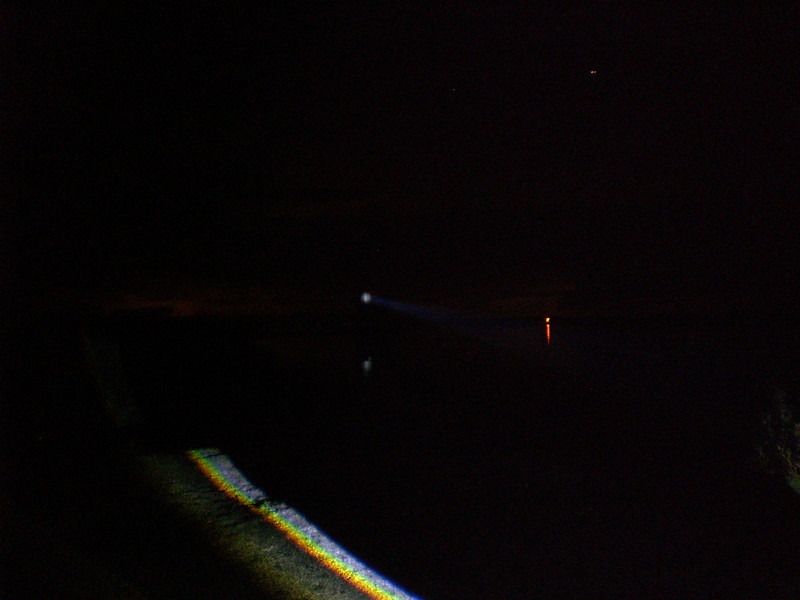 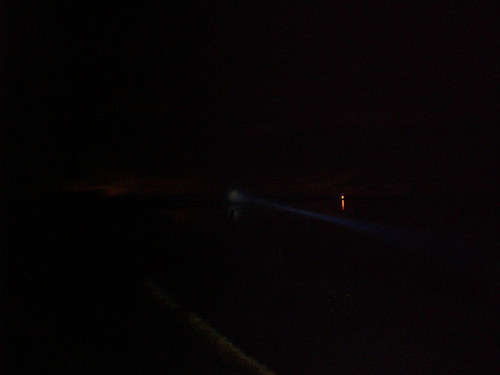 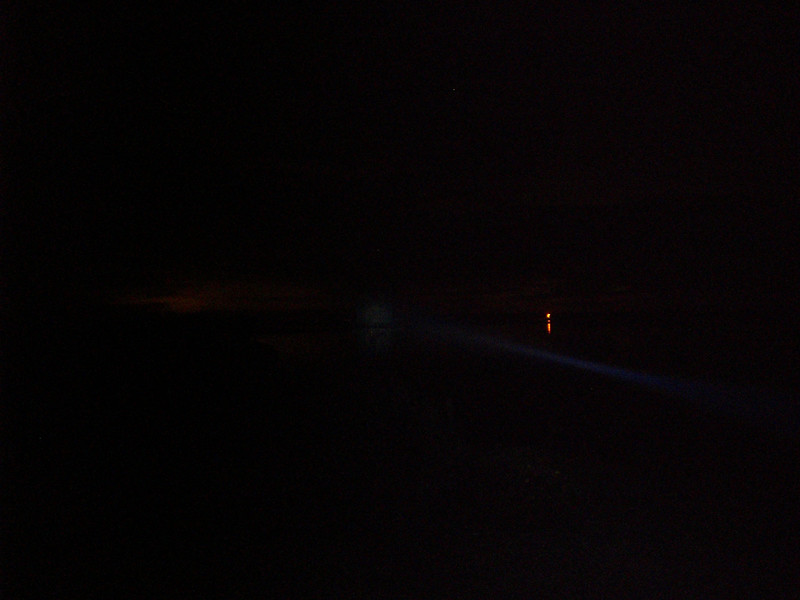 Well after I made the above beamshots, I finally did lux-measurements at 100 metres distance.
(With large optics larger distances give more reliable measurements.)

This beamshot is taken the same night, on my main test-object:
Taken in the centre of Rotterdam, the building 'Maastoren' 19m wide, at 670 metres / 732 yards distance. 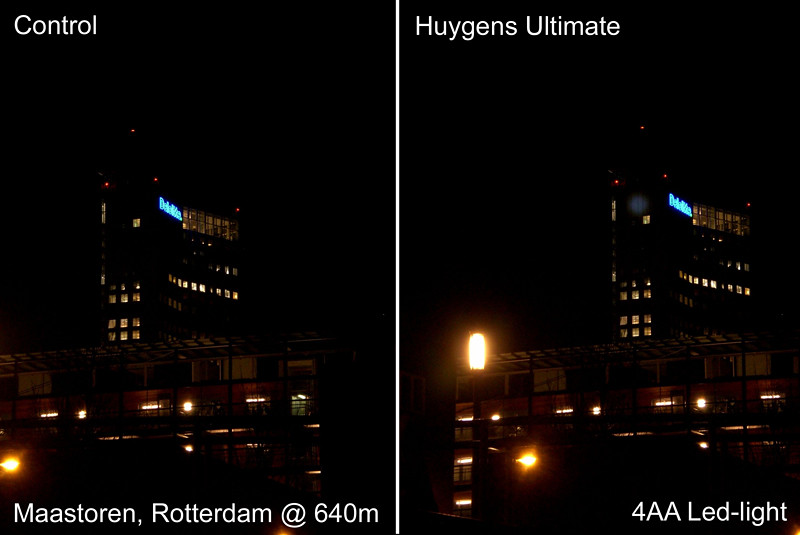 Rotterdam is in the netherlands the city with the biggest amount of light-pollution.

Yes thats a bummer, all reactions gone. But still got the content. Could have been worse, some threads are more ruined.
G

Some months ago I have made some changes:

With this set-up it does 1.700.000 candela.
Next step shall be improving thermal path led-heatsink and/or better led (with quartz dome) 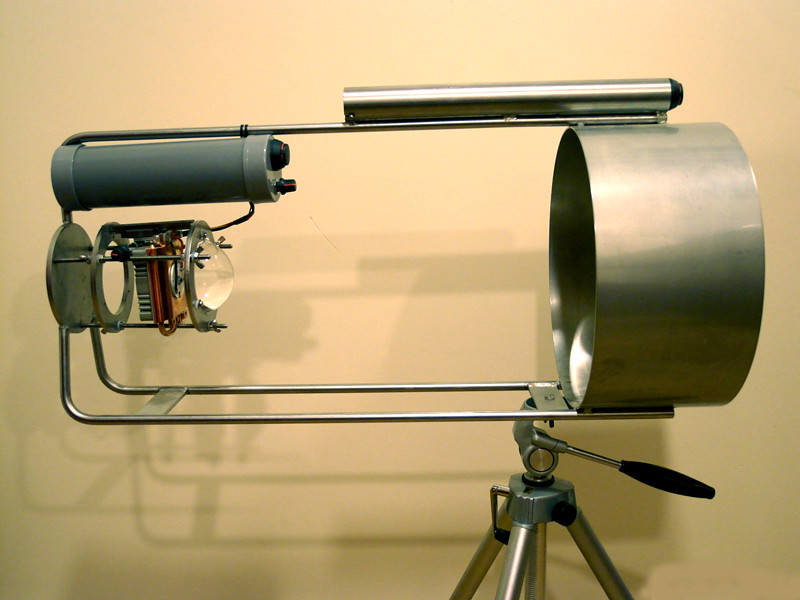 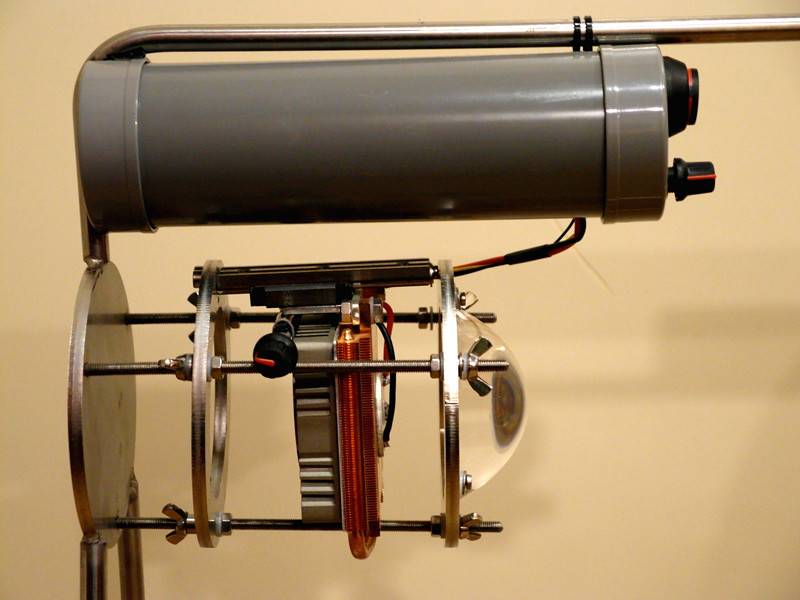 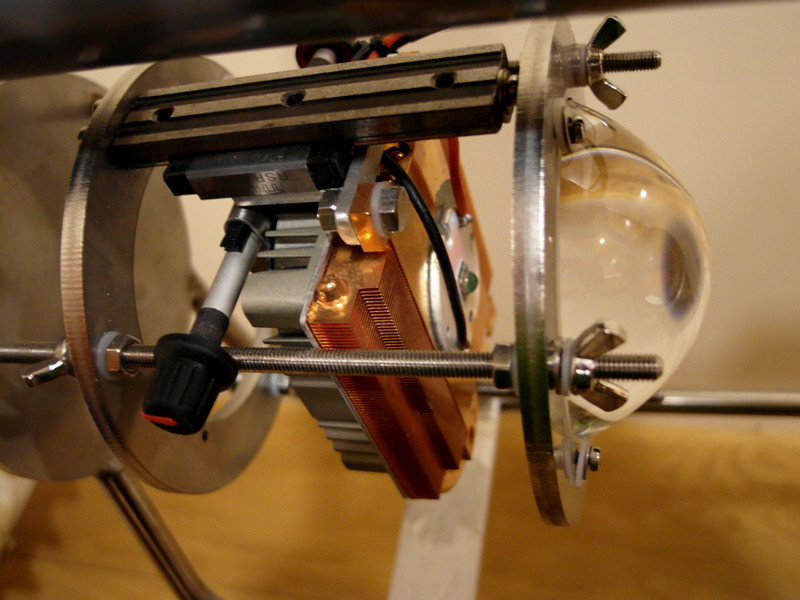 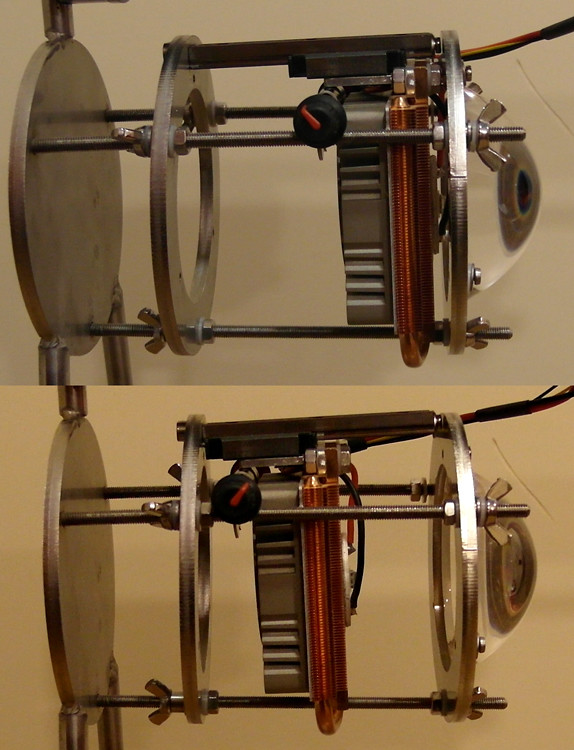 Again, gorgeous! The device itself is somewhere between steampunk and Gilliam's Brazil and the performance speaks for itself. Well done, sir.

some PELTIER cooling element could be kick http://si.farnell.com/jsp/search/br...arametricAttributeId=&prevNValues=2028+203174

Peltier won't do much, the fanned heatsink is more then adequate. Just should get rid of the alu star sometime.

How come that I did not seen this? Well I am not to active member...

So with wavien collar and sst like de domed emitters this monster would throw around 3 milion candela?

I think you should buy that collar, 60$ is not much fur such improvement.

LED technology looks really impressive with expert people like you.

I'm with this guy, I can't believe I've not seen this thread!!! Very cool

Question about a common effect seen in this picture:

Is the beam waist some sort of illusion, or is there a reason why the light does this? It would seem that the most lux would be at the waist, but then also theoretically, would there be a focus "setting" where divergence all along the beam is 0?

Anyways, still amazed I didn't see this thread. Thanks for sharing!

The tiny XP-G2 that can be driven hard, pre-collimators that seem succesfull, the wavien collar that adds intensity... It sounds like time for an upgrade.

The lens is 26cm but it is a plano-convex, not an aspherical, and with quite long focal length.
So it's not just about swapping parts, it would needs new testing and figuring out.
Have found a similar lens but now 30cm diameter. Maybe I will make a cloud-bouncer of it, hanging vertical, less mechanical work needed. Think I will keep the Huygens as is.

Which LED for HDS Ultimate 85

D
Can we make the ultimate LED headlamp?