A relatively new product; recently came across it on a YouTube channel (Sailing Uma).
I /loved/ the idea so picked one up to try it out.

The heart of the product is the double-wall glass vacuum tube, with interior coatings of AlN & Cu for trapping/converting the light & IR to heat. (I suspect that a simple layer of black paint could also be adequate.)
At the end of my picture album below, there is a cross-sectional diagram supplied by the manufacturer.

The performance edge of this design is the possibility of obtaining ~550F (claimed) due to the generated heat not being able to escape the vacuum tube cooking chamber.
Note that most of the traditional solar ovens only top out at ~300F or so.

Pic series of it in action;
The first thing I wanted to try was baking bannock (done w/ half white flour, half wheat flour).
I started small because not only is the 24"-long cooking tray only 2" wide, but with bread rising I wanted to make sure I had more than enough headroom before contacting the tube interior.

https://www.dropbox.com/sh/z3phd90gyzptj4p/AABhtZA89g4vET7E9fRhHVG_a?dl=0
(If a popup window from DropBox asks to install its software, you can just close it out & proceed to viewing the pics.)

Although the pics make the weather look sunny, it was mostly cloudy all afternoon - I took advantage of the breaks in the clouds for the photo opportunities.
The last pic in the series shows the light from the setting sun, and the second batch of breadsticks.

Conditions for the first batch:
48 degrees ambient temp; 11:45 AM
Mostly cloudy afternoon; started the bake with 60% cloud cover, which increased to 90% cloud cover & a couple of brief rain sprinkles.
It was pretty amazing to see the steam piping out of the vent, and the smell of baking bread - on a chilly cloudy day.
All equipment was cool to the touch - demonstrating that what little heat that was available, was being effectively collected & retained inside the vacuum tube.
2.5 hours later, and the breadsticks were slightly browned & ready to eat.

Second batch:
44 degrees ambient temp; 2:45 PM
Mostly cloudy again, with the cloud cover ranging from 90% to 80%.
I went with thinner breadsticks this time around because the sunshine was winding down for the day.
A little over two hours later with the sun now at the horizon, and piping hot breadsticks again.

Sort of a worst-case test, early February in our cloudy Willamette river valley in Oregon.

The next time I do the bannock recipe, I'll do thicker loaves to make more effective use of the limited volume - the goal being a small french-bread format.
Mixing in some shredded cheese before baking would make for fantastic lunch biscuits.

Future plans include baking potatoes, beans, rice, and carrots; as all of those inexpensive bulk foods will travel well.
Making homemade hot-pockets w/ Trader Joe's vegetarian chorizo inside the bannock - or even just a healthy way to bake pre-made burritos would be great.

I expect I will be taking this on virtually all of my extended car camping excursions - being able to make fresh bread out in the wilderness every day will be a game-changer. :thumbsup:
I'll be providing future updates as I take this on more outdoor adventures - specifically, to sunnier interior Oregon & eventually New Mexico.

Wonderful to see one of our own reviewing this product. Makes me want to get one of their models. Our son wants the smaller "Go" (13.5 ounce capacity compared to the 39 oz. of the Sport).

A bit of history:

From 2013, an early iteration from the same company.

Seems like one would not want to get cooked food on the glass interior?

The "Go" can boil water by itself, while the "Sport" requires a separate vessel to boil water. Could a person use the tray in the Sport to boil water, you think?

The estimated time to boil water in the Sport even w/ the accessory, is 45 minutes.
So that's not something that interests me - my Jetboil Zip does that in 2.5 minutes w/ hardly any fuel.
So I think I'm covered now - intense spot heat from the Zip, and longer-term baking with the GoSun. :thumbsup:
Last edited: Feb 9, 2021
S

Great write up on the solo stove! We've had one for a few years and still get a kick out of it. Wife has made quite a few things in it but my favorite is sausage and peppers! It rides in the RV and when we have time she uses it. She has baked in 4 degree weather with the sun out.
One of those products that you need to see it work to appreciate it!
It's a good company that does a lot of good work around the world.

GoSun has released a new, top tier model with increased efficiency and the additional capability of 12 volt heating (similar to the older biggest model). Expensive though; ~$800.
The model Kestrel has, seems like the sweet spot. Thinking one of the videos reported 1000's have been sold and the vacuum sealed cylinders can be purchased separately in case of mishap.

Minute and half video:

Nice concept, but too bulky, and heavy for backpacking. Too slow for group cooking camping, and too expensive. I'll stick with my Biolite stove with BBQ grill accessory. I can get two Biolite stoves for the price of that solar cooker and run them for several months straight on a $6 40 lb. sack of wood pellets. Plus, my stove will charge my phone while my food is cooking.

Funny timing; I was just out last week, car camping on my central OR property.
I broke out the GoSun for an 8-pack of frozen grocery-store-type burritos; we pushed it on the first evening by setting up at 6:30 pm:

but by 7:15 that evening we were enjoying piping hot burritos, smothered under '505' Green Chile.

That is pretty cool, I didnt even know something like that existed. I usually use my jetboil when camping but using no fuel in the right circumstances could be nice.

Coworker loaned me her Go Sun Sport last fall. Cooked up some precooked rice. Removed from oven about a half hour from start. Used de-ionized water to minimize mineral deposition. 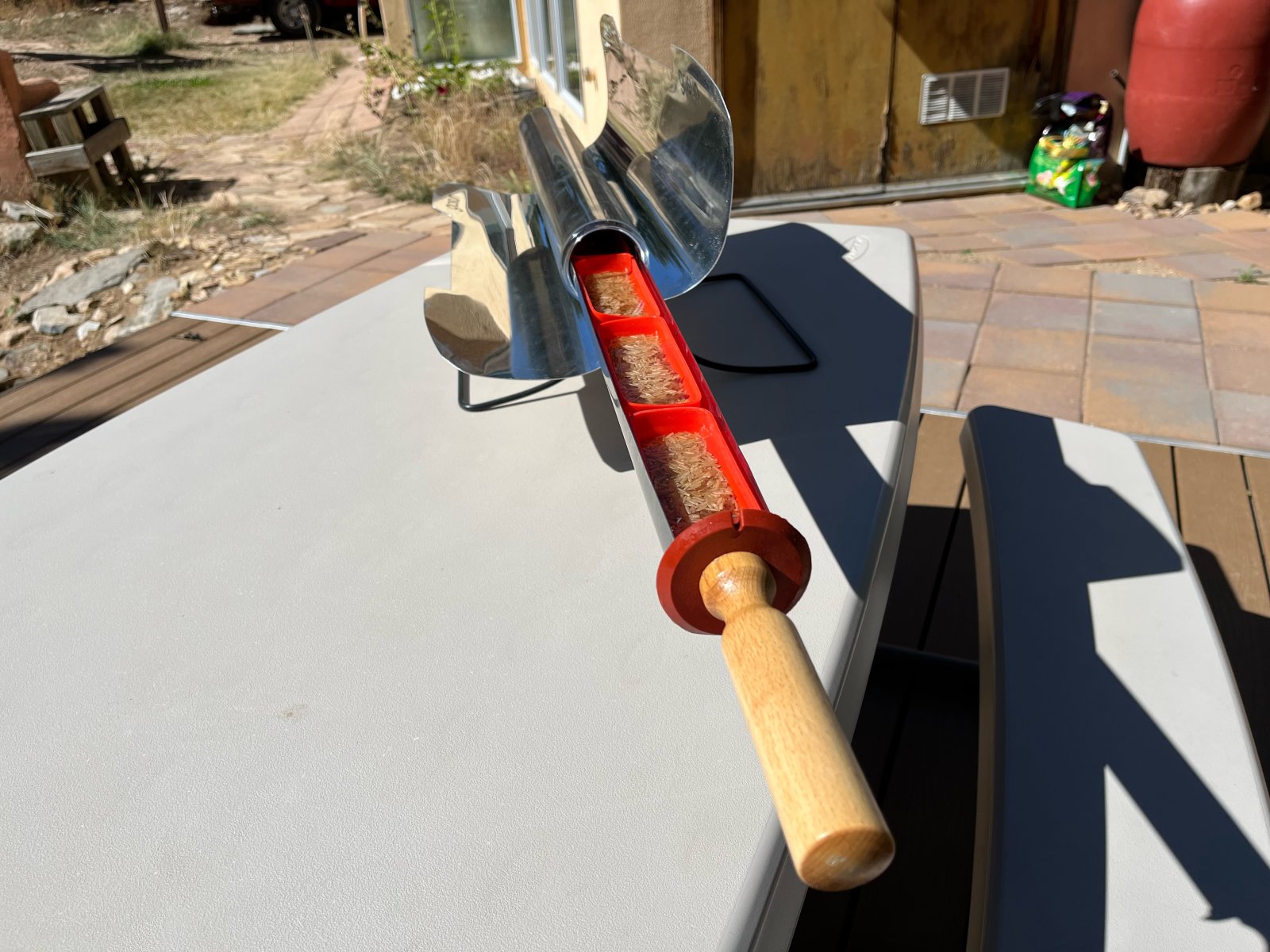 After (Notice that I tied the oven down in case a stiff wind mustered up): 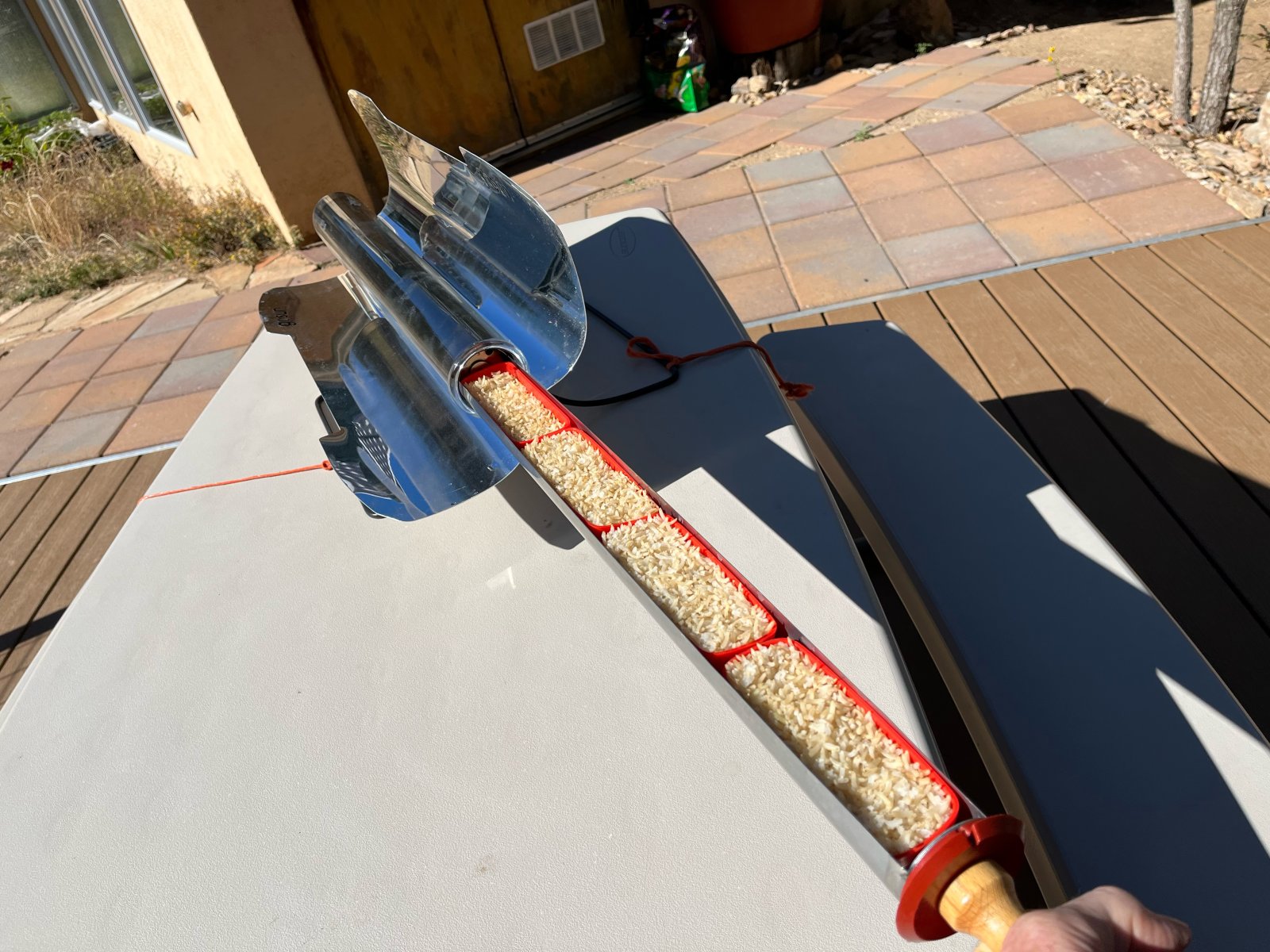 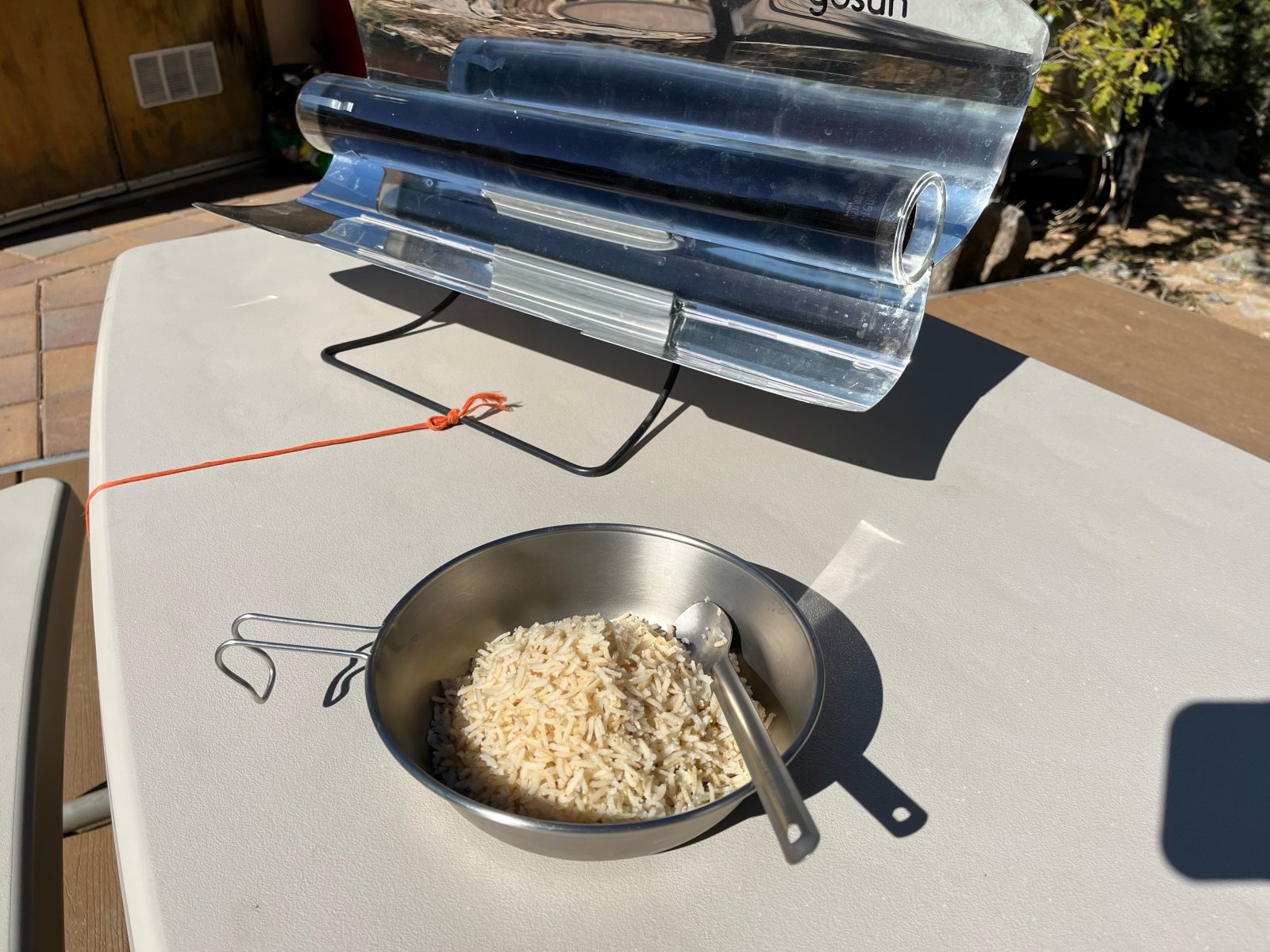 Thanks for the update; yes I do like mine a lot. With better weather on the horizon I'm looking forward to baking more burritos, plus the "505" green chile from Hatch.

The New Mexico road trip in a few months, will most certainly be bringing my GoSun for that.

F
Does anyone have much experience with wood stove inserts?

Leatherman Rebar - The Sofirn of multitools?
2 3

Got a couple new axes for Christmas
2