This is the third thread I have started this afternoon and all three are somewhat related. This is about a new light I personally think is pretty cool but I also think it has a small niche of potential interest. It is essentially a Mule but with a bit more focus and more attention to color rendering at the expense of flux or lumen output.

It is a titanium morph of the Aleph McMule and it is shown in comparison to an Aleph McMule which also hosts the same light engine as the SunDrop.

The light engine has a Nichia 083 High CRI LED as the light source and this is the significant element. 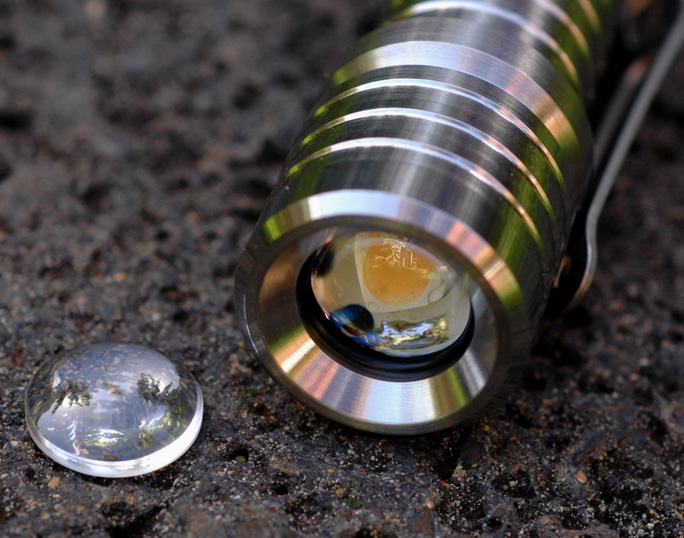 So why the name SunDrop? Well need some kind of name first and foremost. I designed a custom sapphire lens to aid in condensing the flood beam of the Nichia and the intent is to get a drop of sunlight on the target when the target can't be viewed under the sun itself. The lens itself looks like a drop and the name just seemed appropriate if not to ambitious. 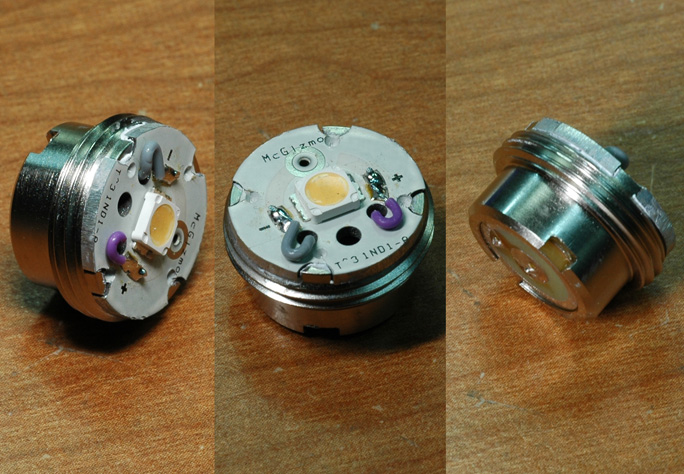 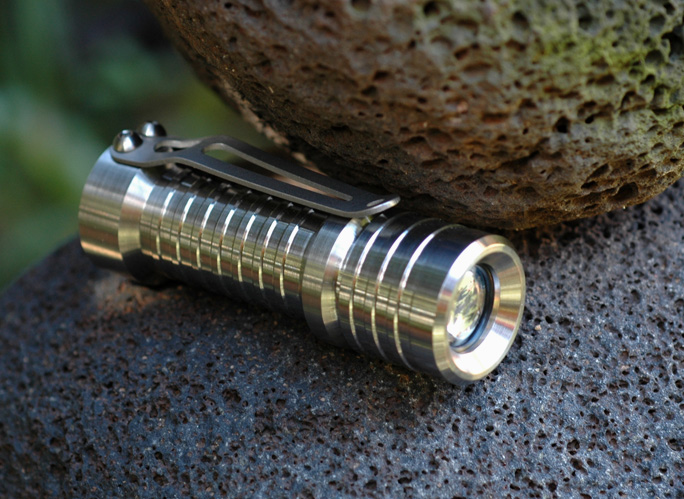 To give a comparison of the SunDrop VS an Aleph McMule hosting a Nichia 083 High CRI LE, I took the two shots below: 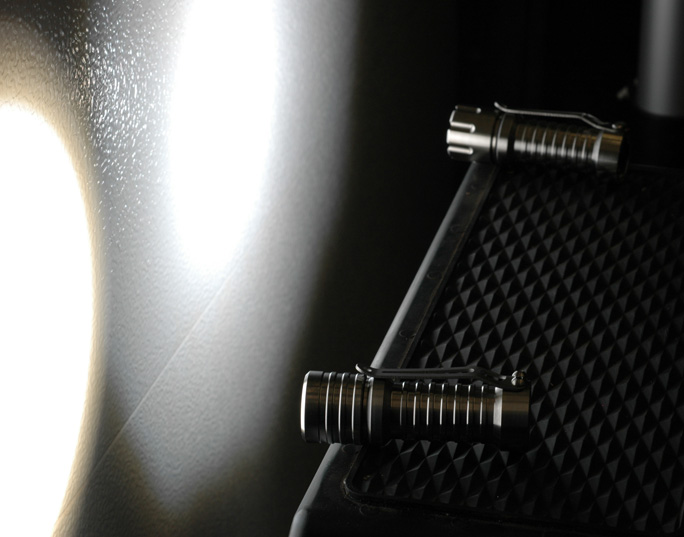 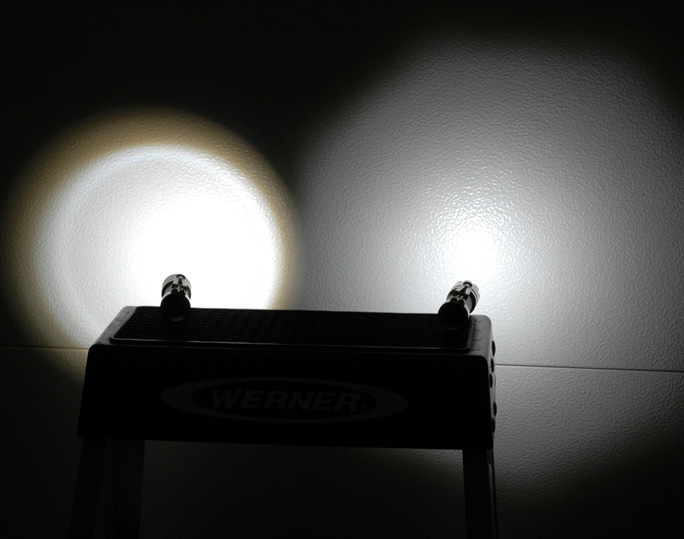 Although the photos don't agree with what I am about to state, the tints from both of these lights are actually very similar to the point of seeming the same when both lights are used in a ceiling bounce. The SunDrop does have a corona or thin band about its perimeter which you can see in the shot above. This band does not grow much thicker though as the beam or spot increases in diameter as you back away from the target.

I think there is a net gain or value in providing the beam comparison above but it would really help to show a comparison with the sources further from the target as well. This is something I may get around to doing but candidly, I want to get some information down and in print and then get busy making some lights instead of talking about them!

The SunDrop first article next to an Aleph McMule hosting a sister LE: 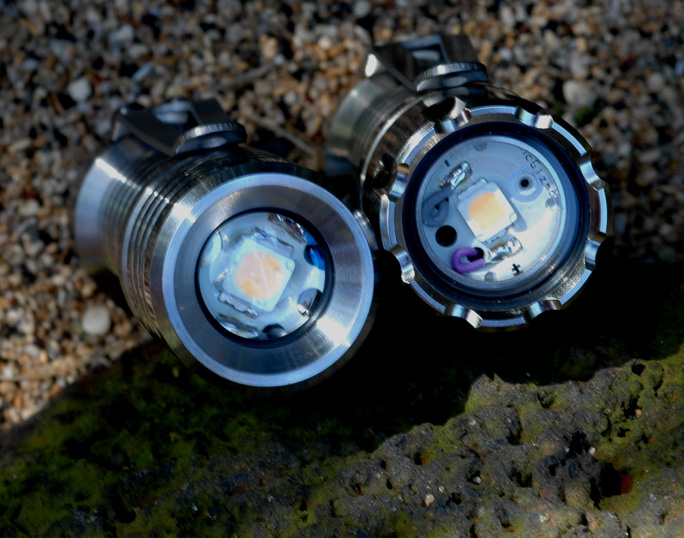 You can see looking into the mule head how the MCPCB is flush with the mating surface in the head. I wanted the LE to work in the Aleph McMule and designed it accordingly and then designed the SunDrop head to be host to the LE as well as get the lens as close as possible to the top of the LED. The diameter of the lens was dictated by the needed circle under it to accommodate both the LED and its lead wires. There is a lot of interrelated geometry at play here and it was kind of confusing trying to come up with some solutions that would be modular and versatile beyond one application.

The Nichia LED is about half the flux of a contemporary Cree or Seoul LED. There is a price to pay in going for better color rendition and in many cases, I doubt the price is justified. In others, I believe it certainly is. If you want to cook some meat on the BBQ, the SunDrop can be real handy, IMHO! If you want to gauge a sunburn, again, nice to have the color rendition. If you need to identify a bunch of different colored wires a light like this might indeed prove helpful.

The SunDrop is vapor at this point but it isn't necessarily vapor for too long. I already have some Ti McClickie paks set aside for a wave and I expect the heads within a week. I do have to build the LE's though. At this point, the only converter I have available is a NexGen which is possibly the right choice for at least some of these lights. A buck/boost would be preferred by some folks I understand and even a buck/boost with multi level output would have some appeal. I have converters that meet these descriptions in the works from a couple new sources but no idea on ultimate viability or any ETA. The 083-D can which is the base of the SunDrop LE can host any number of .550" diameter converters. What I will use beyond an anticipated small first wave where I will use NG330's is still to be determined.....

Very interesting Don. I really like the idea of a good daylight flashlight.
I don't know that I will have the dough for one of these but we will see.
Looks like a very neat project. That lens is very interesting. IT can't be easy to have lenses custom made like that. Cool stuff.
Yaesumofo

I very nice mix of flood and beam...and this LED is real art. It looks
like a little sun...and in that host. Perfect!!!:thumbsup:
P

Cool! Another excellent advance in real world lighting capability while the usual mindless lumen race rages on elsewhere unheard. I want one! :thumbsup:
I

Very interesting Don. I also like, no, LOVE the idea of a high CRI light and this one sits in a very pretty host with an awesome bit of glass at the end

This seems, on the face of it, a fairly unauthodox beamshape though and maybe too niche for my uses:thinking:.

The pictures suggest a wide bright spot with little spill, making for quite a sharp transition between what is illuminated and what is not...........is this your real world experience, if so what are you mostly using the light for?

My apologies if I'm totally off the mark here. Distant beam shots will certainly be appreciated.:thumbsup:
Last edited: May 30, 2008

I love the shape of the head. Very neat and clean. Personally, I like the close-up beam next to the Mule. Just like a brilliant sun burst!

I don't know that I understood all the lingo, but looks like a neat light and I like the beam from it. Any chance the LE will be available separately? I'm still not satisfied with the beam from the LE my current Aleph Mule has.

I can totally see the potential for better color rendition. 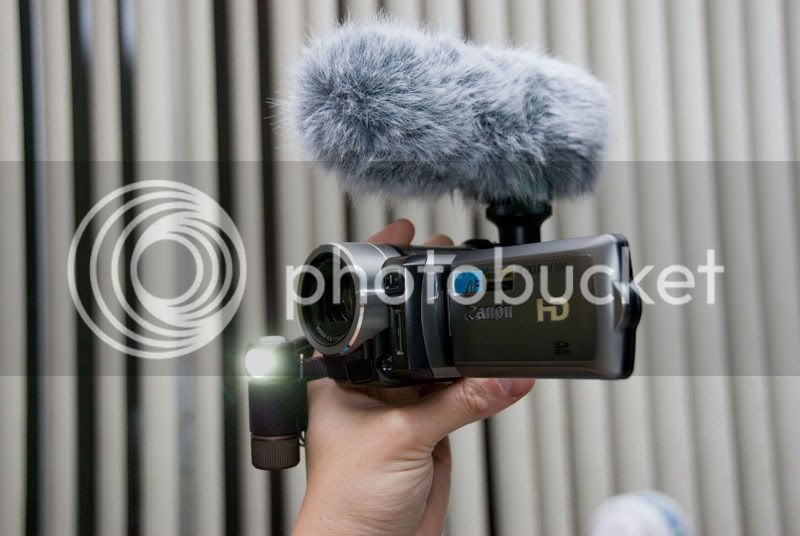 Here is a pic of how I use my Zebralight H30 with a WG tint Q5 Cree. Makes for a great video light. I don't want a hot spot, so a reflectorless "mule" type light is perfect. Only thing is the color rendition sucks with the WG Cree. Color is quite flat and magenta. I always have to manually white balance and/or fix color in post.

I can see where a tri or quad Nichia 083 High CRI LED's would make for the ultimate video light. Perhaps that would overcome the lack in overall light output.

Don, I'd love to see your take on a vertical light "mini molle light" like the Zebralight H30.

the beam looks very useful to me
but I'm someone that needs a little
help from a flashlight everyday.
I would like to offer my services
as a "beta tester" at no cost to you!

Wow, I love the shape of the head! Another must-have McGizmo Ti light.

However with that said, I would love to see something like a GDuP running this bad boy. My Mule with the GDuP has spoiled me, I love the three levels.

So this is definitley a single speed for now?
B

Don,
Count me in. Nice concept.

Location
sanfran by way of boston

Damn another nice one i'll need as well!!! Love it Don, and have always loved the aleph concept so its WIN WIN.

Paul i love this quote!!! Ever since the introduction of the EazyDie Cree/Seoul emitter, I find the McGizmo forum the only safe place.

It would be interesting to see some comparison photographs taken using this as a light source, and compared with other light sources (including the Mule).

If a Sundrop were to drop into my hands, I would be willing to do this.

However with that said, I would love to see something like a GDuP running this bad boy. My Mule with the GDuP has spoiled me, I love the three levels.

So this is definitley a single speed for now?
Click to expand...

+1 on that. Talk about utility if you could have 3 levels of perfectly tinted flood! Another beautiful creation Don!

As a side note, I have instantly and irreversibly nicknamed this light the "FriedEgg" for myself.

Looking into purchasing a sundrop head

Return of the Lunasol?