A different take on the "flashlights and TSA" type of thread, which is boring since I don't remember anyone having anything else than a knife or bottle full of water taken away. Please do report places where e-cigs will not be tolerated.

Also, I do mean traveling in general, whether it be by foot, car, bus, train, airplane or whatever I forgot.

Local, within your country or international.

What do you carry and how many supplies for how long a stay.

What problems have you had (if any) or different laws you have had to adjust to.

Do you try to visit vape shops?

Let's get the obvious out of the way: AIRPORT SECURITY: pretty much the same as carrying flashlights in my experience.

I've been through Eastern Canada (Ontario, Nova Scotia, New Brunswick, Newfoundland), US (Texas) and Italy (also through a German airport checkpoint on the way there) with my mods and some quantities of e-liquid in 10 and 30mL bottles, both labeled and unlabeled bottles that I keep in the liquids/gels bags. They never even bother with that. The only problem I have ever encountered is airport agents wanting to swab my Provari.

I just decided to point it out to them before going through X-ray and that has helped greatly. But things change... now they don't even want to hear about it "yea,yea, just put it in the bin; we know what the heck an e-cig is". They still need to check it out as a Provari just tends to look like a stupid detonator through X-Ray

For some reason, I'll put it on the side so the window with the 2 screws won't show up and then they just stand my bag on the side going into the machine :facepalm: Next time there will be 2 Provaris in my bag... I should have someone go through before me and film the scene One agent did comment on how nice my Provari was and wanted to know how well it worked.

Whenever I travel, I try to find the local vape shops before leaving, but I don't always have a chance to stop and smaller towns still lack a local presence.

I visited Vapor Sense in Texas, which makes just too many liquids to try them all (300 flavors IIRC), but I did end up buying 2 different flavors that I would buy again if I came across one of their shops.

Italy was interesting: most people still smoke cigarettes, yet it is illegal to smoke indoors in public places (restaurants, malls, etc.) but you can vape anywhere, which was really nice since we spent our evenings at a local bar. They even had a vape shop INSIDE the airport! The lady there explained that vaping was a big thing there about 3 years ago until all the BS about it being worse than smoking was published in newspapers and on TV, so everyone reverted to smoking. I really like their regular tobacco juice (best of all I tried so far) and am really sad that I'm about to run out.


WHAT I CARRY:
I found a nice little pouch with dividers that almost looks like a miniature camera equipment pouch. I can fit 2X30mL, screwdriver, extra cotton and coils, 1 RBA tank plus a Nautilus mini, 2-3 18350's and one 18650 and I bet I could also fit both of my Provaris in there. Okay, it's a square makeup pouch, but you can't really tell as it's black and square (the last one they had, else I would have skipped the purple and the pink ones) If I travel by airplane, the tanks and liquid bottles go in the same ziploc as my shampoo and I can stuff. I pretty much carry all that just about anytime and it has been more than sufficient for even 7 day stays, although I carry a third flavor in a 10mL bottle and battery charger for any travels that last more than 2 days.

Unfortunately my trips are less adventurous and usually to the caravan in Wales or camping in the Lake District......

I will take at least 3 mods and 3 tanks,at least 3 coils per tank,charger and cells are taken care of as with flashlights. I normally take my wp6,vp1 and vp2.

Cells are separated for each use(lights/mods) so no mixing for me there.Cells have their own case like 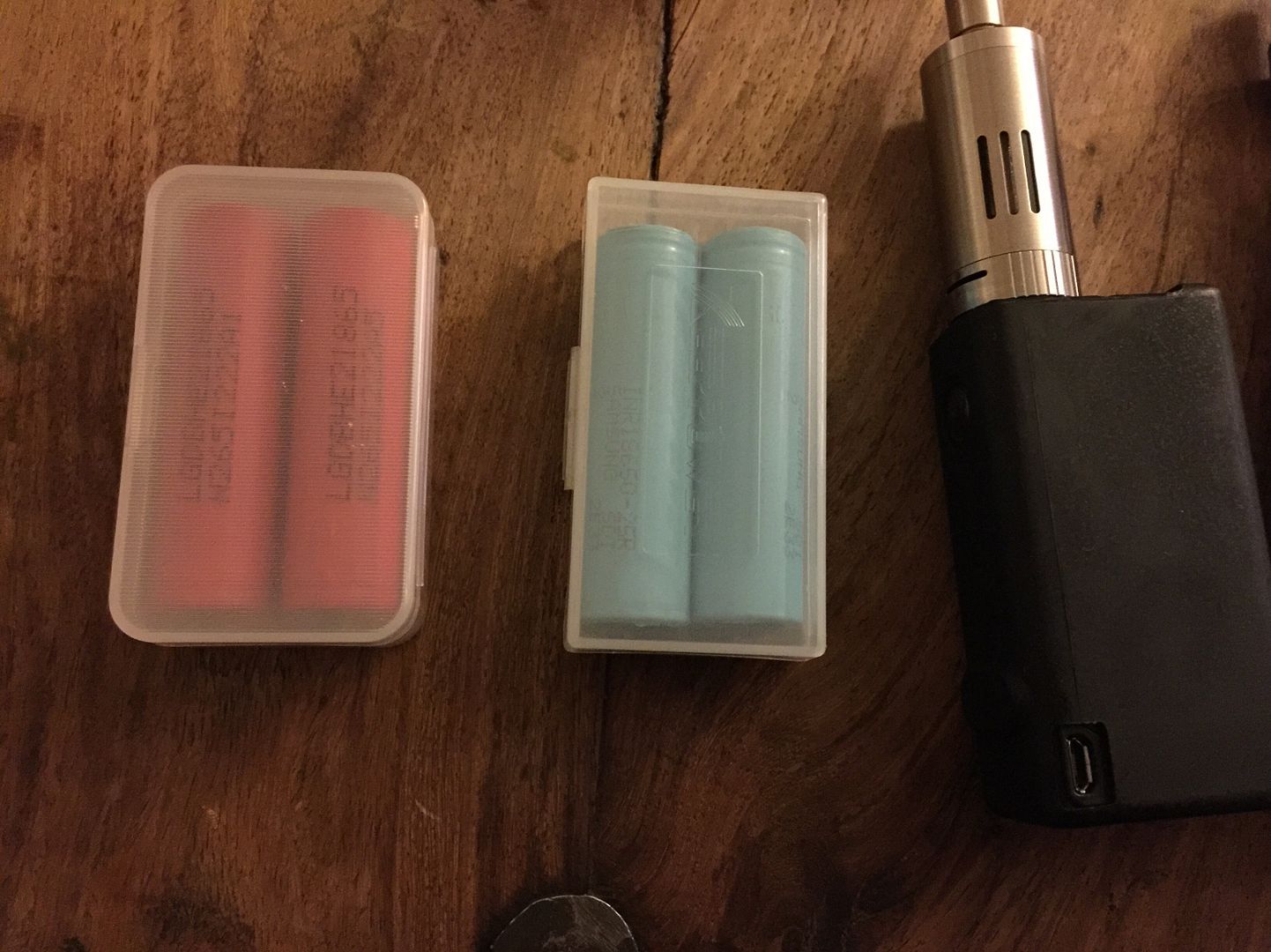 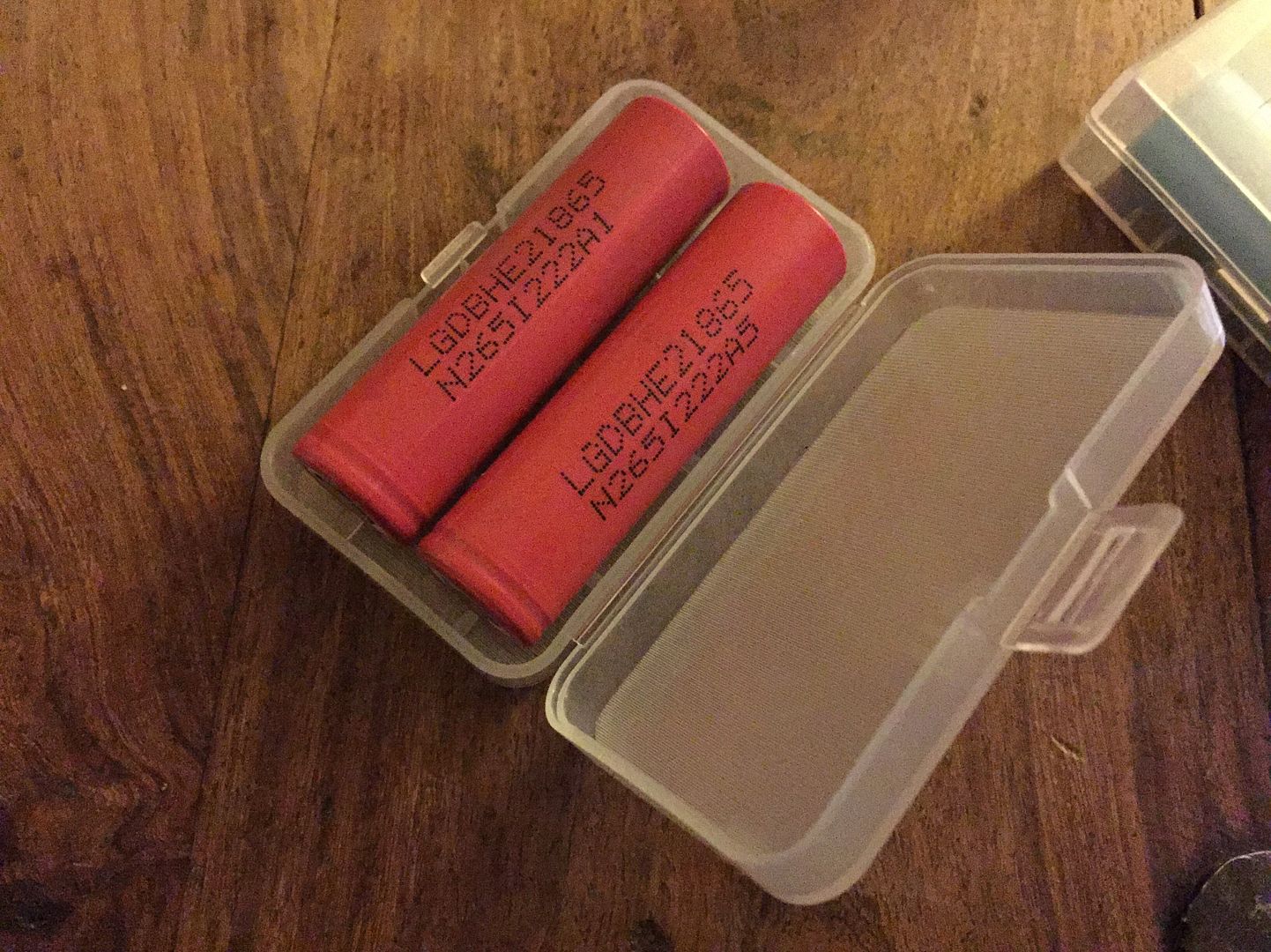 Simple as that for me,i have 3 cases,some are too small for my stuff so just pack as is,but these are stored padded in a sports bag along with flashlights and chargers.

Always have a mod edd(every day drive) at hand,then take one out and about with me with spare cell and a 30ml bottle of vape. Depending on how long i am away(usually no longer than a week) I just take a larger amount of fluid...........

Now if i was to fly,i would take as hand luggage to be safe.............i presume allowed but never checked or had to recently ...............fluid for example might be a problem now! Honestly dont know the latest policies in force in UK.

ven said:
Unfortunately my trips are less adventurous and usually to the caravan in Wales or camping in the Lake District......
Click to expand...

I mostly travel for work, but I personally consider camping more adventurous than business travel. That might have something to do with the fact that I go on 7-8 hours+ hikes, though. I gotta get some more of those battery boxes instead of using plastic bags and elastics.


ven said:
[...]
Always have a mod edd(every day drive) at hand,then take one out and about with me with spare cell and a 30ml bottle of vape. Depending on how long i am away(usually no longer than a week) I just take a larger amount of fluid...........
Click to expand...

EDD.... that's a new one I was just calling it All Day Vape (ADV), but I guess I tend to switch juices when I get out of the car.

), I have never heard of any trouble there. If it is legal to any extent to vape in a country, I expect absolutely no more trouble than carrying flashlights as more people seem to vape than get addicted to flashlights. Kinda funny when you consider that more people see than there are smokers and ex-smokers combined.
You must log in or register to reply here.
Share:
Facebook Twitter Reddit Pinterest Tumblr WhatsApp Email Share Link

P
This is why I never made anything for vaping