Once again through the very kind courtesy of 4Sevens I have a bunch of Preons on hand for this review.... 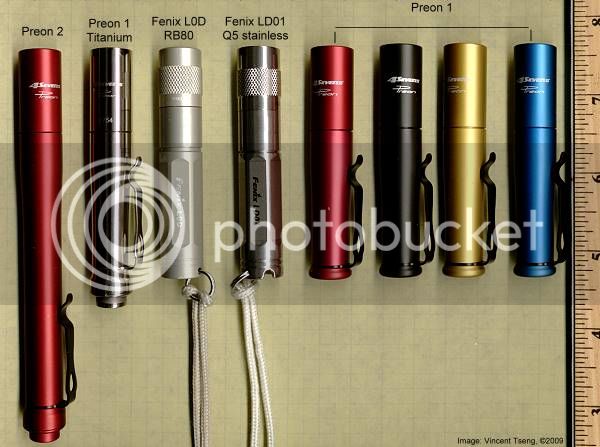 well at least one in every color plus a Preon 2.

These aren't just colorful (well, the black isn't ) but the finish and anodizing seems to give the surface some grip and even feels almost like rubber...... 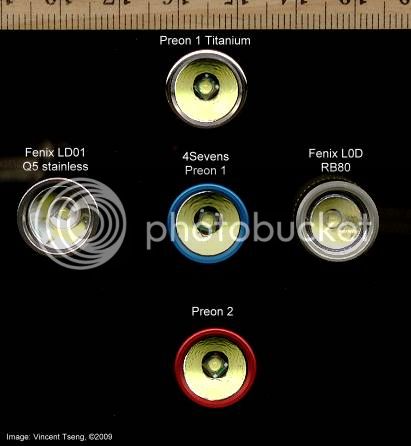 The Preons use the Cree XP-G R5 emitter and can be used as a twisty - as supplied or one can get a clicky tail-switch as shown on the titanium version (that's actually 4Sevens' own personal light....) and on the red Preon 2.

The Preons have Strobe, SOS and 2 beacon modes - but one does NOT have to cycle through them nor is it likely that those would be invoked by easy accident.

The best is for me just to show the instruction sheet -

so unless one has a predilection for cycling through modes it would be pretty unlikely to get to these special modes without some premeditation....

I also really like the sequence/order of having Low first then going up in brightness - that's my main complaint about the Fenix AAA series that they start in default medium brightness and I am always switching it to low - so am somewhat dazzled first by the default brightness.

So how does the Preon 1 perform?

vs. Fenix LD01-Q5 Stainless Steel both on Max using NiMH 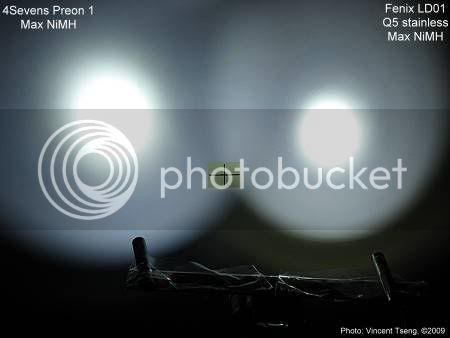 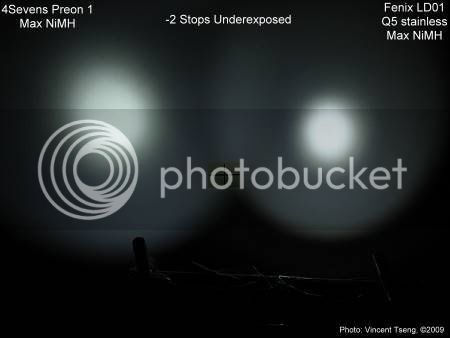 The Fenix LD01 beam is more concentrated - whereas the Preon spreads its light out more to give both a bigger hotspot and wider corna - so this is hard call to make. On paper the LD01 is rated at 85 lumens max - the Preon is rated OTF 70 lumens max. 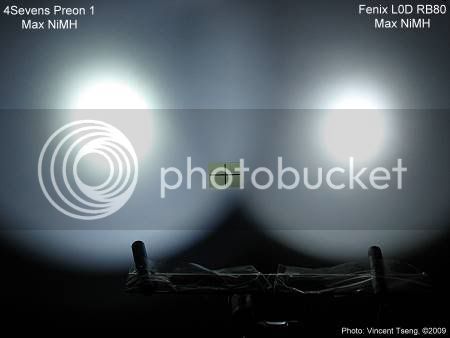 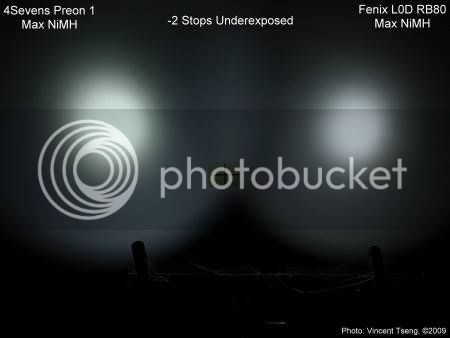 here one can see that the Preon is brighter - iirc the Fenix L0D-RB80 was rated at 60 lumens Max? 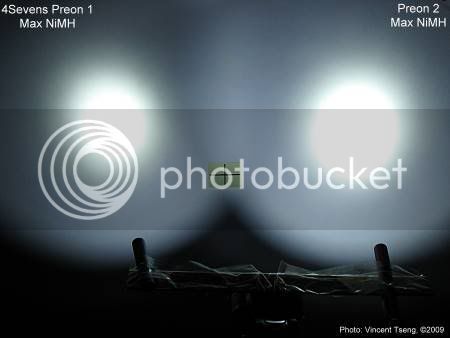 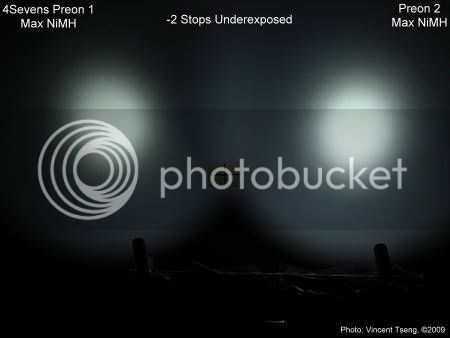 the Preon 2 is noticeably brighter than the Preon 1 - actually their heads are the same - so this is to show the output on a single AAA vs. 2x AAA - the Preon 2 is rated at OTF 160 lumens - that's twice as bright - and pretty impressive for a 2x AAA light. 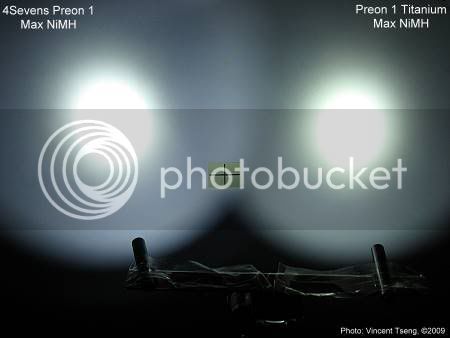 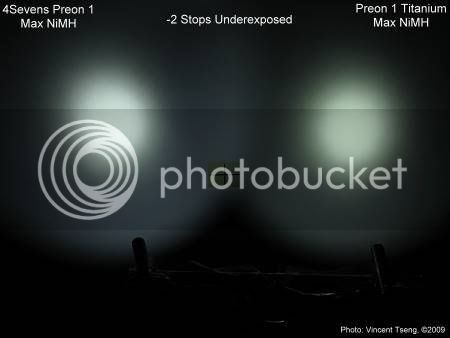 any differnce has to do with LED sample variations - the Ti version seems to have a slightly warmer tint maybe tending just a bit toward green - and the regular Preon 1 appears to be a bit brighter.

All in all the Preon 1 is a very nice pocketable flashlight - the clip (removable) designed for the light and not as an after-thought accessory is actually genuinely usable/useful. A tab for a keyring is supplied so can be used if one does not like the clip, or install neither to get a plain unadorned/unattached light.

Cool, thx a lot for putting together the review and beamshots!

Thanks for the review! Could you comment on the aluminum clicky? How does it feel? Does it tend to stick like the titaniums? Is it easy to take apart to clean out pocket lint? How much do you need to turn the head to lock it out?
P

Asbestos said:
Thanks for the review! Could you comment on the aluminum clicky? How does it feel? Does it tend to stick like the titaniums? Is it easy to take apart to clean out pocket lint? How much do you need to turn the head to lock it out?
Click to expand...


If you don't mind, I can give you my two cents on these items: The aluminum clicky feels pretty nice, very similar to the clicky on a typical metal pen. Only thing I don't like is there is a bit of play in the cover so it feels a bit funny if you hit it on an angle, if that makes sense. I can't comment on taking it apart or compare it to the Titanium clicky though.

It takes very little turning to lock it out via the head. You just need enough so that the edge of the body tube isn't contacting the circuit board in the head, as the threads themselves are anodized completely.

Very useful review - thanks! Your beam comparison shots are excellent, and give a good idea of this light's capability - it's a nice-looking beam, too.

Moving to the Reviews section.
U

Thank you DM51 for your kind words.

Yes, that is one thing that I noticed with 4Sevens lights since my first review of the Quark AA -
they all seem to have very nice smooth well centered beams.

This is simply due to good centering of the emitter in the reflector -
a thing that used to be the bane of flashlights - a de-centered emitter - that causes all sorts of artifacts - sometimes unpredictable.

The centering is achieved by a simple plastic holder/template which can just be seen in the photo of the head(s) the 4 black tabs/claws that are around the emitter in the Preons are what centers the emitter to the reflector almost without fail. It is a simple and elegant solution to an age old problem.

I am almost certain other manufacturers will now adopt/appropriate the same or "similar" technique to center their emitters too -
but remember to give credit where it was originated to 4Sevens -
clever guy that......

Important and outstanding, as always, UnknownVT. Thanks!

My blue Al 2xAAA Preon lives in my shirt pocket now at all times... I love it!

Do you have a picture of the Preon 1 with the keychain ring?
U

was.lost.but.now.found said:
Do you have a picture of the Preon 1 with the keychain ring?
Click to expand... 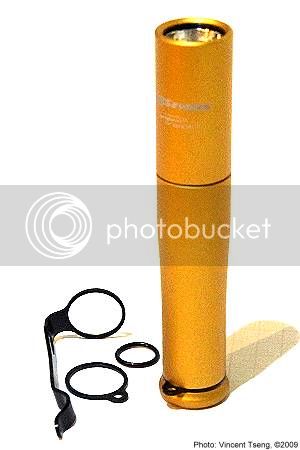 Thanks for a great review, makes me even more happy for my Fenix SS LD01 :twothumbs


Thank you for your time and effort in producing this fine review.

BTW, has anyone done Run-Time tests yet ?

PeaceOfMind said:
If you don't mind, I can give you my two cents on these items: The aluminum clicky feels pretty nice, very similar to the clicky on a typical metal pen. Only thing I don't like is there is a bit of play in the cover so it feels a bit funny if you hit it on an angle, if that makes sense. I can't comment on taking it apart or compare it to the Titanium clicky though.

It takes very little turning to lock it out via the head. You just need enough so that the edge of the body tube isn't contacting the circuit board in the head, as the threads themselves are anodized completely.
Click to expand...

Thank you! Sounds great. I just need to pick out a color before I order a kit!
U

One of the main attraction to me about these Preons is the order of brightness levels - the Preons start with the lowest level --> medium --> high.
I like this a lot as I tend to use the pocktable AAA lights in the dark (surprise!) and often for close hand-held usage - and most of the default medium that most single AAA lights start off with are too bright for that kind of usage, and almost temporarily dazzle me.

I much prefer to start with the lowest level and ramp up to a higher level if necessary.

All on NiMH (eneloop)

vs. Fenix LD01-Q5 Stainless Steel both on Min using NiMH 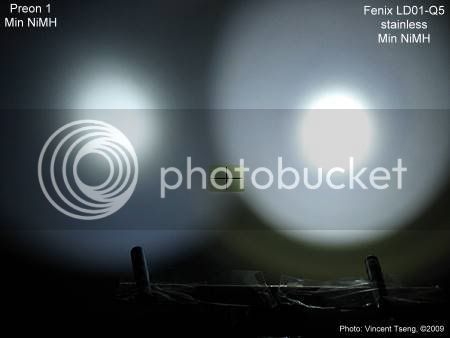 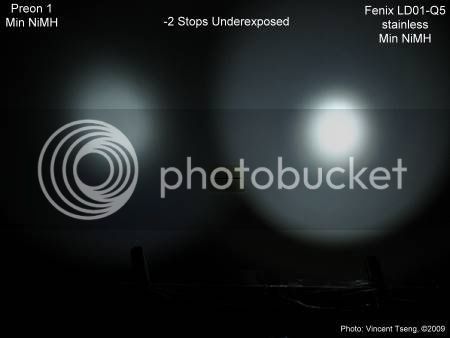 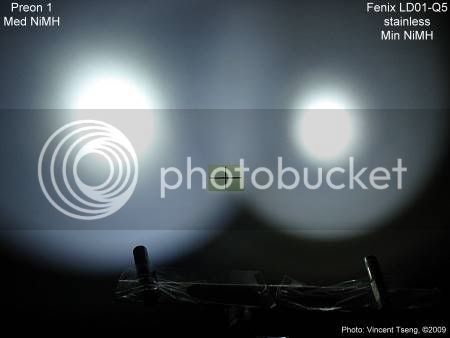 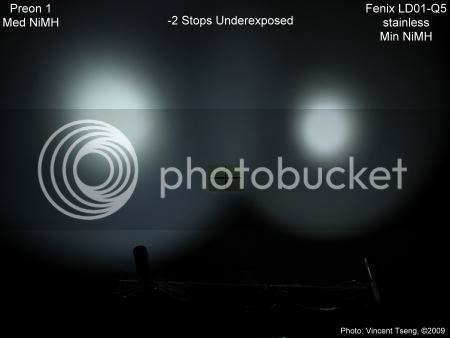 certainly looks close - although it is a hard call to make since the Fenix beam and hotspot are narrower so more concentrated - so perhaps the Preon 1 might be a bit brighter overall? Preon 1 Medium rated 8.5 lumens; Fenix LD01-Q5 Low rated 9 lumens. 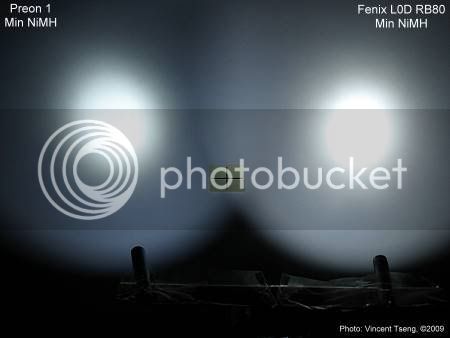 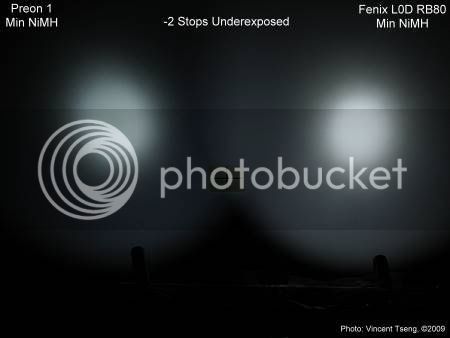 again the Fenix L0D-RB80 is noticeably brighter on its minimum low. 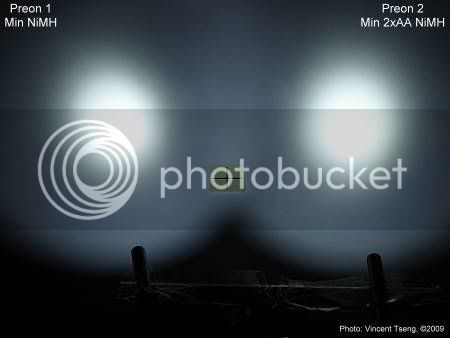 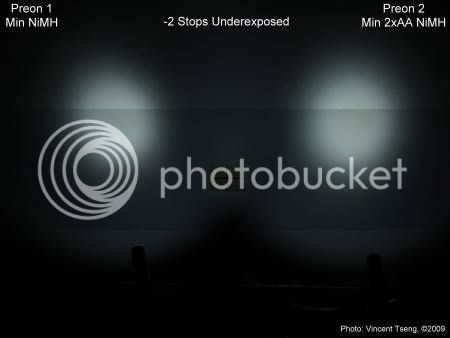 Looks about the same - the 2x AAA Preon 2 is rated at 2.2 lumens compared to the 1.8 lumens in the 1x AAA Preon 1 configuration - this is close enough for almost all practical purposes -
the Preon 2 does pull away showing more differentiation at its medium and most at the high levels.

vs. 4Sevens Quark AA both Min and NiMH 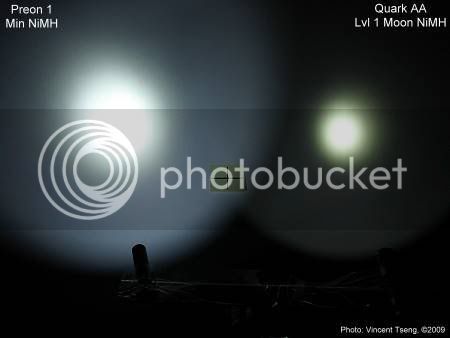 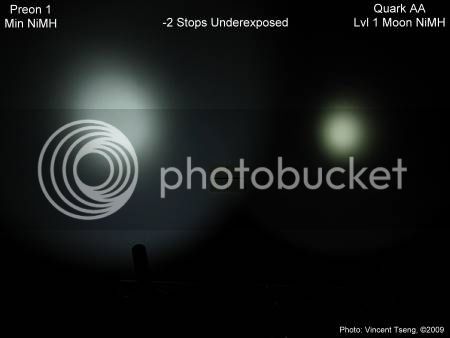 the Quark AA minimum Level 1 Moon mode is really low rated at 0.2 lumens - so it is not surprising that the Preon is brighter here.

vs. 4Sevens Quark AA on Level 2 Low and both on NiMH 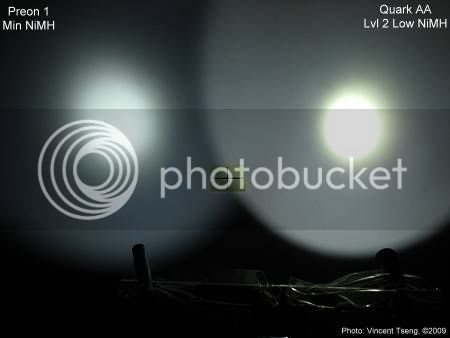 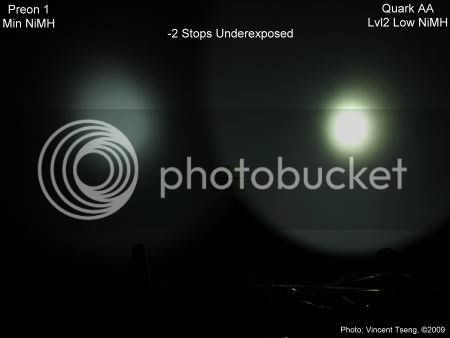 now the Quark AA is brighter - the level 2 Low is rated 4 lumens so it is about twice as bright......

vs. NiteCore D10-Q5 both on Min and NiMH 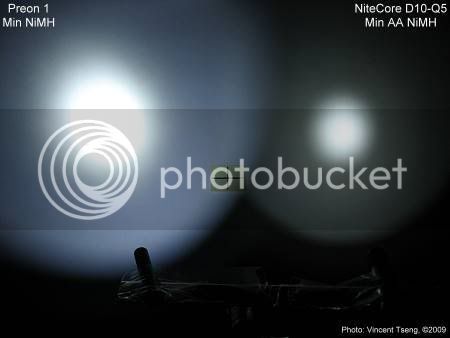 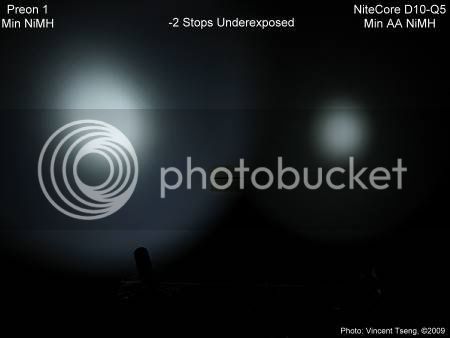 Added Preon 2 to my wishlist! Great little light! Runs on AAAs too.

Thank you for the excellent review VT. You put a lot of working into your beamshots and it shows.

My red Preon kit arrived today. It's hard to put this light down! I found the head a little too tight for one-handed twisting, even though I removed & lubed the o-ring. But I think I like it in long form with clicky the best anyhow. And for kicks, I put the black clip on the short body and added a 10440 and black Maratac head. That combo looks nice and twists easily... although it's not a perfect fit, there's a gap visible and mode change can be touchy. Comparing the two, the Preon 2's high and Maratac/10440 high seem very close. On medium and low the Preon 2 puts out a little bit less than the other.

To me, a 1 AA is the most comfortable thing to put in a pants pocket. When pulling it out it's easy to give a twist, the hand has it in the right position. But the Preon 2 is ideal for clipping to the shirt pocket. It's easy to pull it out with the index finger right over the clicky.

Nice photo of the group! Makes that gold one really look better than I thought it would. I had a tough time deciding between blue and red, then when 4Sevens ran out of the blue kit I knew it was time to move... before red kits ran out too!

Aagh... Now you've gone and done it again!! (Tempting me, that is). Trying to resist buying a Preon 2.(I'm trying to hold off until after New Year's Day.)