This thread is an extension of the original Maui Time (Pictures) which I will close now.

The whales are starting to show up again and I hope to bore some of you with additional photos and comments based on life here in the middle of the Pacific.

I'll start the new thread off with a visitor to Maui who is known by some of his friends as the Major Weenie. 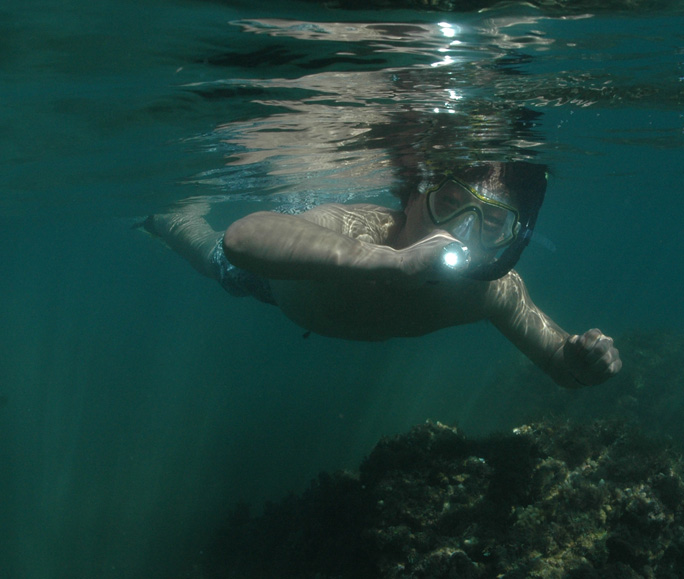 The islands are being served some large winter swells and waves right now and UW visibility has been hampered severely in most areas where I normally snorkel but PK and I went to a lewerd location yesterday which was much less impacted. There was still swell and surge there which brought sediment up into the water but we could see reasonably well and went out to visit the creatures.

On the way back, I noticed something very small and mostly translucent on the surface and assumed it was some type of jelly fish at first but it looked like it had two large eyes when it rotated and faced me head on!

I put my head up and yelled to get PK's attention and he swam back to me. 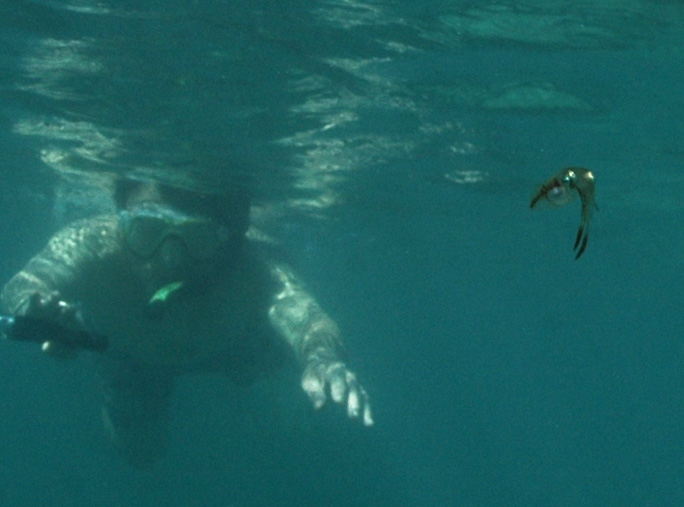 The visibility was quite poor in the shallow water close to shore here. The little fellow which turned out to be a squid about 1.5" long was engaged with something here. As PK got closer, the squid left whatever it was groping with and would squirt qround but not really going to far relative to us "giants". In the two shots below, on the far left of the image you can see the squid. 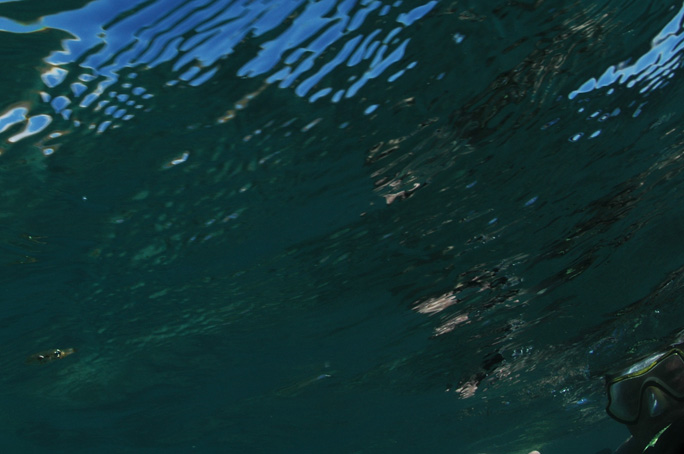 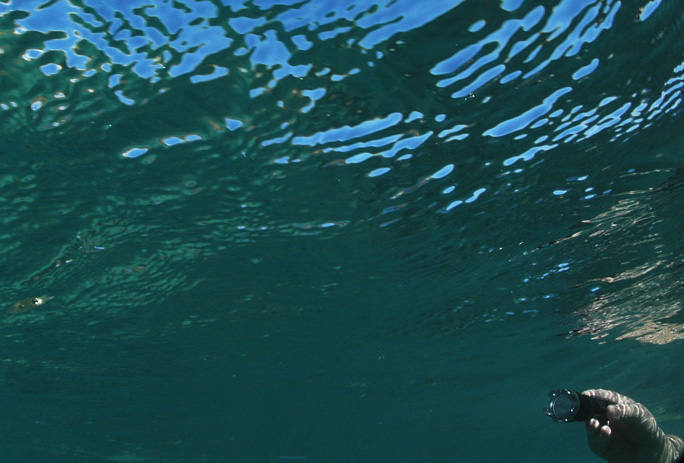 I cropped and zoomed in on of the images to try to get some form and features of the little fellow: 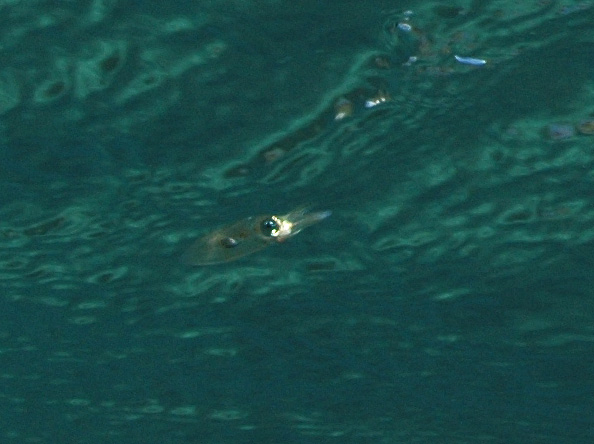 I have only encountered squid a couple times and never such a little fellow!! The little guy would squirt an ink cloud that didn't do well in spreading and it reminded be of the chafe or decoys let off by military craft but was hardly effective in keeping us from watching the squid ink and jet away by about 6 inches!

PK provided the squid with some tactical posturing and techniques but it was hard to determine if the squid assymilated any of the ideas. 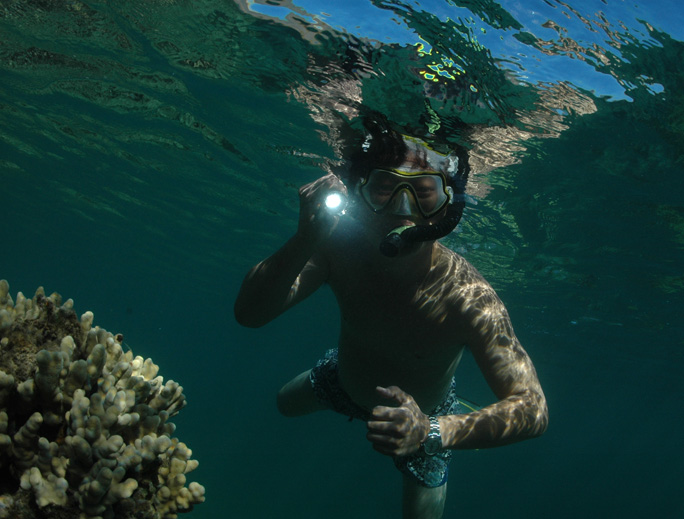 Those pics remind me of the slogan: "Juan Valdez drinks Costa Rican coffee."

Thanks for continuing this thread Don... all this flashlight stuff gets boring after a while! :duck:

I think he's using one of his PKEF lights... you know the old saying, "Never use another man's light." :shrug:

Yeah, kinda looks like a "porky", but I couldn't help poking fun.

Point of clarification, PK brought his own lights into the water with him: 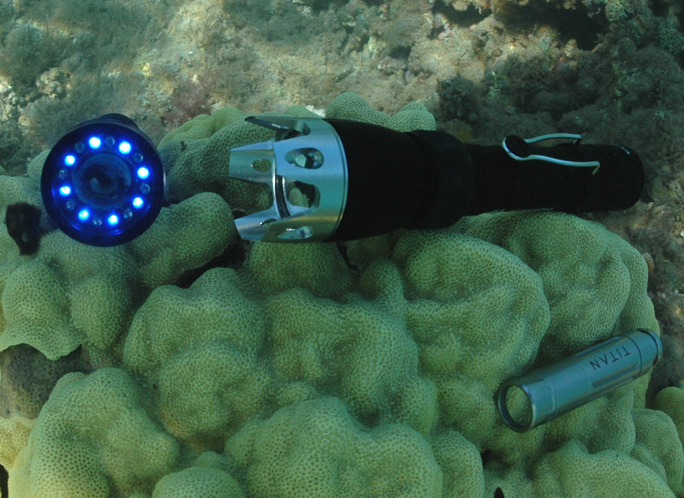 Don, what's the deepest you've taken one of your PD's?

Thanks for the Pictures...........I was in Maui, December 2006 and really enjoyed the beauty of the island. Climate was pretty good, too :thumbsup:

Had a cup of Coffee with McGizmo :nana:

Don't believe all the stories, he even bought

Green,
I would guess about 25' while snorkeling. Mr. Ted Bear hadone tested ata dive shop when I first started making them and I believe they took the light to 125' of presure with no compromise to the seal. Being a PD which would activateat some pressure, it doesn't cut it as a dive light nor will I or have I claimed any of my lights to be any type of dive light. I would not be happy if any of my designs were faulty under pressure but too much depends on the actual condition of the light to insure its integrity, beyond its design, under pressure.

It's a shame that you two giants bully a little cute squid!

Thanks, Don. My current endeavous take me no deeper than a puddle, but things will change shortly.
J

I lived in Maui for 7 years and miss it dearly when winter comes.
There is nothing like it! No island comes close to me.
The only strange thing to me was 80 degree and Sunny Christmas!

Hey McClickie,
Did PK fly over on his Lunasol? I hope you two are enjoying each others company. Maybe a PK/Don collaboration is in order. Something in "Ti" with
a bright led in one end!

McGizmo said:
Green,
I would guess about 25' while snorkeling. Mr. Ted Bear hadone tested ata dive shop when I first started making them and I believe they took the light to 125' of presure with no compromise to the seal.
Click to expand...

:wow: hadn't thought that the PD can go that far

Griff,
You planted the seed with your kind exchange. Thanks!

McGizmo said:
Green,
I would guess about 25' while snorkeling. Mr. Ted Bear hadone tested ata dive shop when I first started making them and I believe they took the light to 125' of presure with no compromise to the seal. Being a PD which would activateat some pressure, it doesn't cut it as a dive light nor will I or have I claimed any of my lights to be any type of dive light. I would not be happy if any of my designs were faulty under pressure but too much depends on the actual condition of the light to insure its integrity, beyond its design, under pressure.

FWIW I have taken my McLuxIII-27LT to 100 feet for 9 minutes with no leakage.

Pre-dive preparation consisted of tightening the bezel and an 0-ring clean and lube.

Since this is a picture thread, let me throw in some images I have taken in the last few months even though a few of you have possibly seen them on my web page.

Old Airport Beach, a part of Kaanipali is where I snorkel most of the time and through the years, the turtle population has dropped. I suspect this is primarily due to the increased traffic of humans visiting the waters. There is a large Westin time share complex that has been expanding and under construction on the beach in front of the reef I have come to know.

Most of the turtles are green sea turtles and they are growing in numbers again and I don't know if they are still considered endangered. There is another turtle over here, the Hawksbill turtle that is still endangered and I have heard numbers like less than 150 of these in all of Hawaii. I don't know how such numbers are estimated but given the scarcity of these, many divers and snorkelers never see a Hawksbill. There has been a couple of these turtles feeding on the reef at Airport for a number of years now and I have taken a few shots of them over the years. I was contacted by a women at some museum back east last year asking if she could use an image of mine of a Hawksbill for a flier she put together for school children. The theme was something about man's consumption and use of animals to the determent if not extinction of the animals. I guess the "tortise shell" used in the glases, combs and other personal items actually came in great part from the Hawksbill.

I didn't have any very good photos to offer her and on some internet searches, it didn't seem that there were any abundance of images. That this lady found my site made me think the supply of images might be pretty slim.

Long story short, since there have been a number of Hawksbill turtles frequenting Airport even with the increase in snorkler traffic; many swims the only turtle I see is a Hawksbill, I have made an attempt to get shots of them when I can. I have a small Olympus Stylus camera that i can wear around my neck and I have taken to wearing it most times I go swimming unless the visibility is just terrible.

Below are a couple shots of Hawksbill turtles. They feed on sponge primarily and they can be seen breaking off old coral to get at the small sponge growing in the nooks and crannies of the coral. They have a longer neck than the green sea turtle and their "beak" has an obvious difference in shape and over bite compared to the green. Their shell is also different in appearance and on a youngster I shot one day, you can see the difference in profile where the shell looks more like it consists of overlays of plates which saw tooth perimeters. 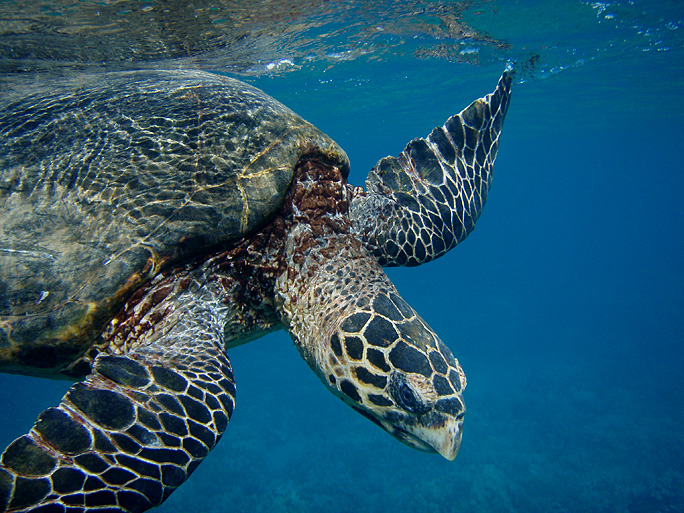 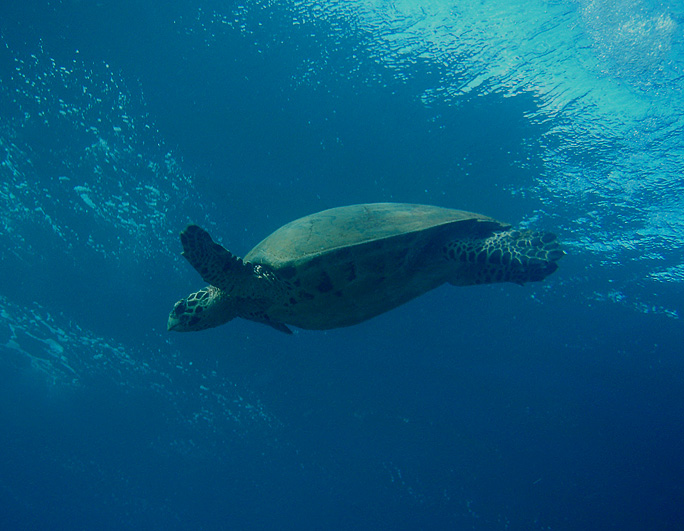 Below are two of them in contention for an area of the reef. I felt quite fortunate to get to see two of them together considering how seldom they are seen even individually. 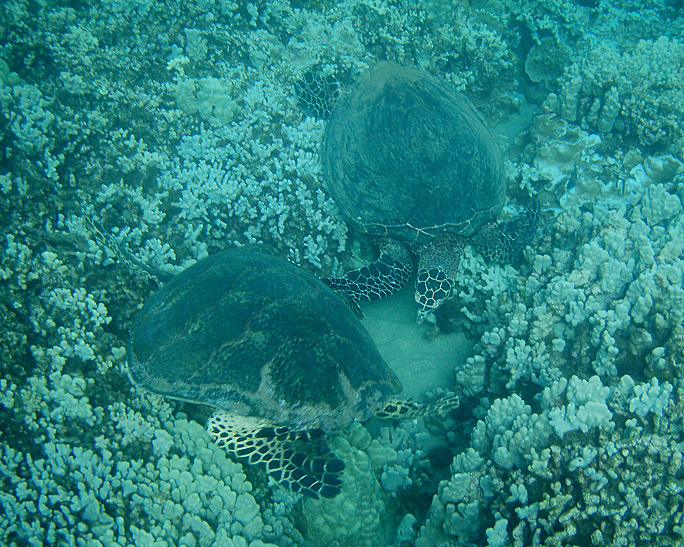 A few years ago, the image below would have been of a tree lined beach with no sign of man: 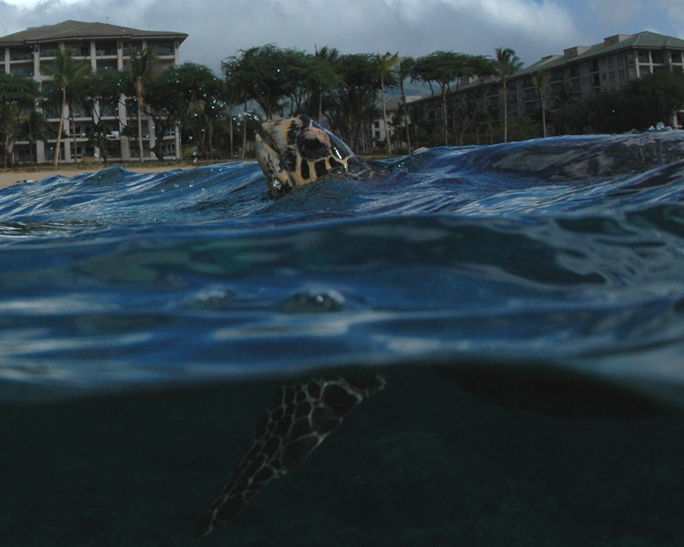 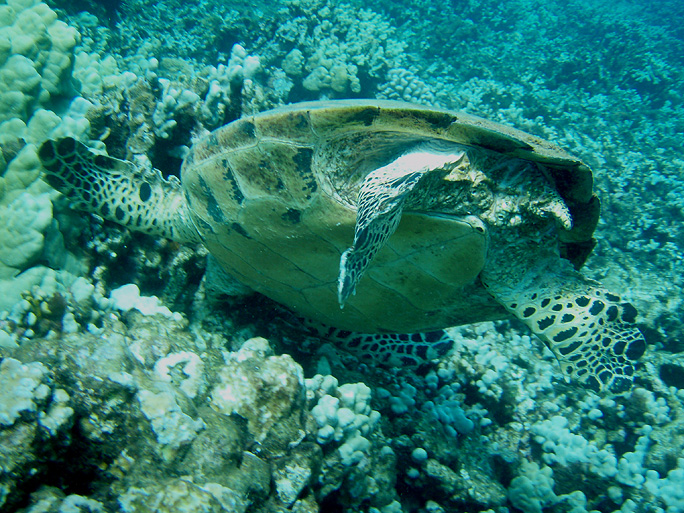 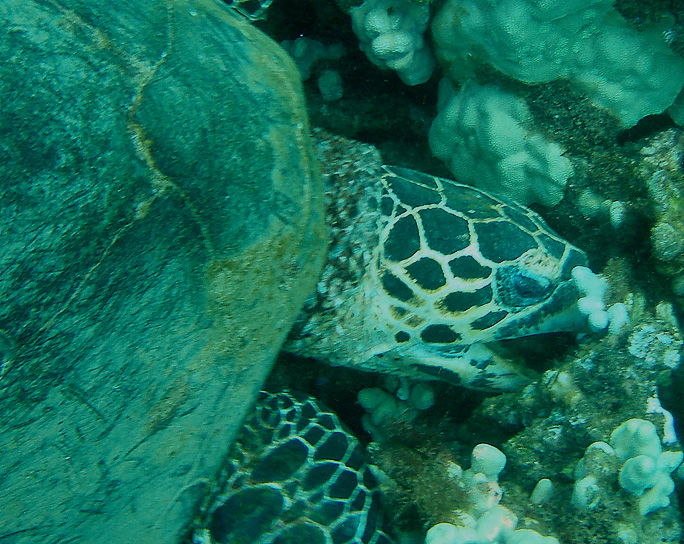 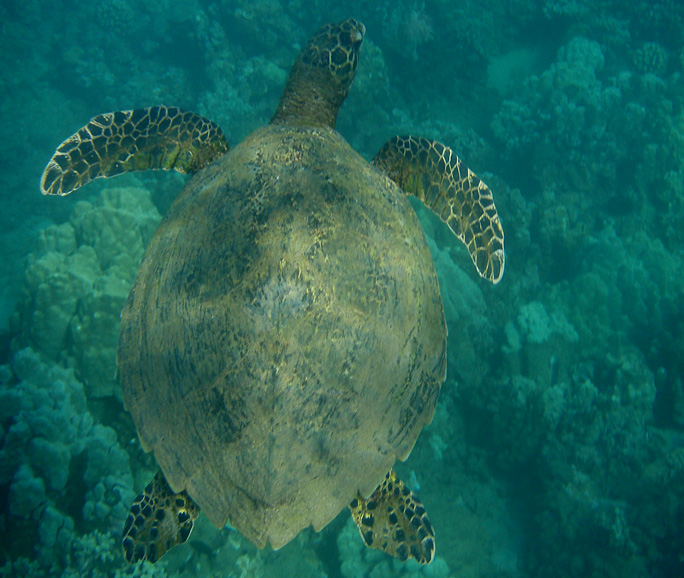 Although the Hawksbill is not as photogenic as the green sea turtle I believe they deserve some attention.

I contacted some turtle experts a while back about a small green that had a fish hook stuck in it and when I mentioned that there were a couple Hawksbills that frequented Airport they were surprised and envious that I could see them often.

I have a new and simple form of transportation when I want to take a break and visit the beach for some snorkeling: 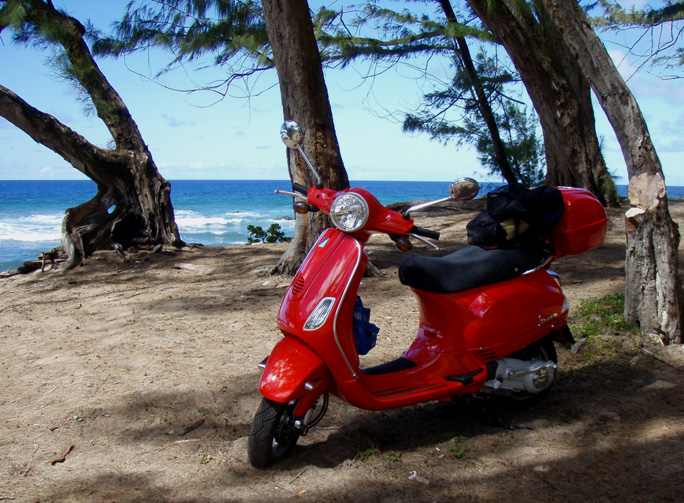 Location
New York (not the city)

I didn't realize there were any other Kroma owners out there... yet alone Kroma users.

One of my favorite SF lights...

Did the light go swimming with you? I take mine for a swim every once in a while.

Aepoc said:
I didn't realize there were any other Kroma owners out there... yet alone Kroma users.

One of my favorite SF lights...
Click to expand...

The appeal of the Kroma is a utility quite beyond the realm of CPF members.
Nothing wrong with that as long as there is an awareness of the distortion of appeal that makes Flashaholics special amongst the illumination tools sector.

In terms of CPF the Kroma is one of the most unsung models SureFire has which is a shame because from a technical perspective there is much to appreciate.

As for the aquatic world Don shares with us - I was also quite surprised at how close humans are to nature. The balance must be extremely difficult to get right.
I guess it's a bit like the Pyramids of Egypt - there is quite a small viewing angle at which it is possible to get that classic vista. The sprawl of man has all but enveloped them.