Some of you may already be aware of this project from FB but now that it's becoming closer to reality I'll share it here.

The idea is to create a "head" that replaces the existing reflector and bezel to increase throw and add functionality to the HDS light you ready own. The LED and beloved driver/UI will remained unchanged, and the design is intended to follow Henry's philosophies of Robust Durability and Reliability.

Since it's not a new head per se, I'm calling it the HDSRB for HD(S)earch & Rescue Bezel

Ballpark price will be around $300 per HDSRB. Creating a high quality, custom US Made reflector in small batches is shockingly pricey! The entirety of the unit will be Made In The US to the highest standards and will feature a custom reflector and UCL glass. I ran a quick poll on FB and received enough interest to pursue it so I'll be making an run of only 25 units, one of which will be mine of course. I hope to have prototypes in hand within a week or so. I'm unsure if there will be additional production runs after the initial 25pcs, that depends on demand and more importantly, if the machinist will be willing/ have time.

It's all very much still in the development stages, here's a rough sketch of it on an 18650 body: 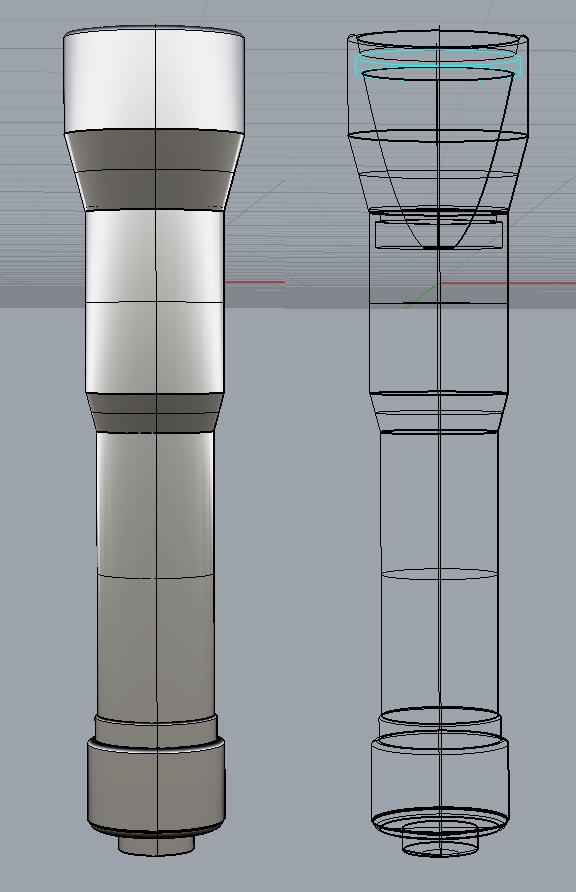 Are you taking orders? Do you have the measurements of the reflector - length and width?

RCS1300 said:
Are you taking orders? Do you have the measurements of the reflector - length and width?
Click to expand...

I hope to avoid pre-orders.

More details will be available later, as it's still being prototyped a lot of the details are in flux right now

Well I’ll be darned! About time someone started thinking outside the box. This looks very good I’m sure enough of us would be interested in this to make it happen.

More details will be available later, as it's still being prototyped a lot of the details are in flux right now
Click to expand...

Okay. Something to keep in the back of your mind. I have a V2 Thrunite Catapult that throws a beam of light over 100 yards using only 170 lumens. If I could do that with my HDS...

With reflectors, design is everything.
B

RCS1300 said:
Okay. Something to keep in the back of your mind. I have a V2 Thrunite Catapult that throws a beam of light over 100 yards using only 170 lumens. If I could do that with my HDS...

It's pretty clear from the prototype sketch this isn't going to be as enormous as the catapult, and HDS doesn't use domeless emitters, so that's completely unreasonable.

bmengineer said:
It's pretty clear from the prototype sketch this isn't going to be as enormous as the catapult, and HDS doesn't use domeless emitters, so that's completely unreasonable.
Click to expand...

The intended takeaway from my comment is that with reflectors, design is everything. Clearly, there are limitations in working from the Bezel. My Catapult does not have a domeless emitter.
R

That's super cool. I recall campaigning for something like this in the suggestions thread a while ago.

Since custom made reflectors are expensive, have you considered using an optic? Something like Oveready uses in their DIP drop ins and e-series heads seems like it would be about the right size and provides good throw.

Hats off to you for taking the initiative and making it happen. I know it's a lot of work to pull something like this off.

Very interesting Project, and a cool idea! :bow::bow: Depending on the price I'd be interested getting one of this sets.

To be able to carry this with you in the outdoors. Maybe in a hogo style holster next to your HDS. Would be awesome!

I don’t have any of HDS torches but this project (even in Ti) could easily push me over the edge...[emoji106][emoji106]

I’m really interested to see where this goes! I carry a HDS every day at work, but I also often need something with more throw than it can offer.

Appreciate all the feedback!

Random Dan, I considered a TIR but that sorta felt like cutting corners. My goal is when you’re holding it in your hands you get that feeling that only HDS gives you. I want this to feel like HDS through and through, not like you’re holding an HDS with an aftermarket attachment. A lot of the design decisions like this are informed by asking myself “What would Henry do?”

You can for-sure count me in on this, that looks great. Totally behind this!!!

Are you in contact with Henry at all to seek any advice on problem or issues that may spring there ugly head?
I

I recall Hogo said if someone wants to make spare parts for HDS, as long as those parts meet HDS standards they will put a link to that maker on their website. I wonder if they might be willing to provide you a link on their webpage if they liked your design enough. That would almost certainly guarantee you would be making and selling more than 25 I would think.

I do not do social media; so i am glad that you posted here as well. I'd also be interested to know the results when used with the different emitter options.

I hope this all works out for you. I imagine you will easily be able to come up with enough interest for at least 2 runs if not many more. The only downside possibly might be that some really like the profile of the light the way it is...how many will be ok with the larger head.

HDS Amber in the Fog
2

HDS Be On the Lookout for...