I love those McGizmo's stainless steel mini-clips. I wish there's another choice,
the Titanium version. Don't you all agree with me ?

Ti would be cool, but even cooler would be a clip that was guaranteed not to come off by itself, but still easily released--a new innovation.
J

If it'll insure that my Draco won't come off when I don't want it to, sure, I'd pay that.
J

Who should I ask ? Mr.McGizmo ? or Berkley Point ?

If this is about mini-clip in Titanium, without any new inovation. Then, there's got to be some sort of minimum order..... I do not think changing the material to Titanium wouldn't be a serious problem, other than the price. I am just guessing though.

Do you have any good idea about new inovation part ? So far, there is only me and Trashman interested.

I really think the Ti small clips would sell like hot cakes.
J

If the gate is made narrower or the same width of the frame then this design shall be better. As it is, there is a fault with the gate being wider. At an angle, it will automatically open with less force......my 02 cents.

I have commented on these in Ti before. YES, I too would love to see some!!! I have put out feelers for a couple years now trying to find a source but to no avail. PK told me sometime last year that he had found a source to do these in Ti but to my knowledge, nothing ever came of it.

As to the safety of the gate, it is what it is and just needs to be understood. The best small clip in Ti I have found was a knock off of the small Wichard snap shackle that a company in the Urkraine did. They never brought it into their production line up. I snagged a hand full of them through a manufacturer/ importer (Suncor) I worked for at the time who had a relationship with this manufacturer. It is the same company who made a few proto type and small run of Ti-Biners for us. I went so far as to get a provisional patent on this design but due to slow response from the manufacturer in the Ukraine and a lack of momentum, the project died. There was a large distributor interested in a stainless version of the clip but funding never happened.

Don, not that you need the extra ideas, but (somehow) incorporating a swivel to the base of your SS clips would make *killer* attachments!

Per a past discussion with BP, they're made in the Ukraine.

I know they're not the small McGizmo clips, but just wanted to comment on Don's post about about the Ti locking biners. :shrug:

Green,
If the clip needs to swivel then it needs to swivel, plain and simple. However if the clip does have a swivel, apart from the added cost and need for the swivel to be well designed and implimented, the clip becomes that much more ungainly to attach and remove; especially if it is a small clip! I don't pretend to have all the answers here but I have spent a great deal of time on the questions and in search of the answers!

Hmmmm....I think miniatures of the "existing biners" (see McGizmo's prototype link) would do just fine, especially the Ti and SS ones.
J

Thank you so much for your comment regarding to Ti mini-clip ( dream ).
I reacently bought a small Ti quick link here in Japan. Not as small as a great mini-clip, but it is small. I think it is the same one that Berkley Point sells. This online store ( maker ?) also has some McGismo mini-clips ( Looks the same ?). It's in Japanese, but please take a look.

Mizumoto is a good company to work with and I approached them years ago with my mini clip series design ideas to partner and source the clips for me. This is not information I was inclined to be public about but it seems an explaination might be expected.

They make nice Ti chain and I think they have some propriatary tricks in the welds of the chain. They KNOW I am always looking for a Ti clip!

I thought they are copying without permission......

Yes, I noticed the cool Ti chain too.

Agreed ... some of those in to would be a blast
With the appropriate chain in ti ... :huh:

I'm with you - I would love some of these clips in Ti, and some chain too (the Mizumoto chain looks nice but the links are too large for a keychain.) The only small-gauge Ti chain I've found is from jewellery suppliers.

As to the question of the clips detaching themselves, this can only happen if the ring they are attached to is too thin. If you use a ring which the clip can only just fit on, it then CANNOT come unclipped by accident.

The photo below shows a Ti ring (you may be able to see the “Titan” marked on it) which is perfect for the largest of the 4 sizes of clip. I got the ring from Berkeley Point:
http://www.berkeleypoint.com/products/titanium/wholering.html
There are 3 sizes – the one in this photo is the smallest (1.25in dia): 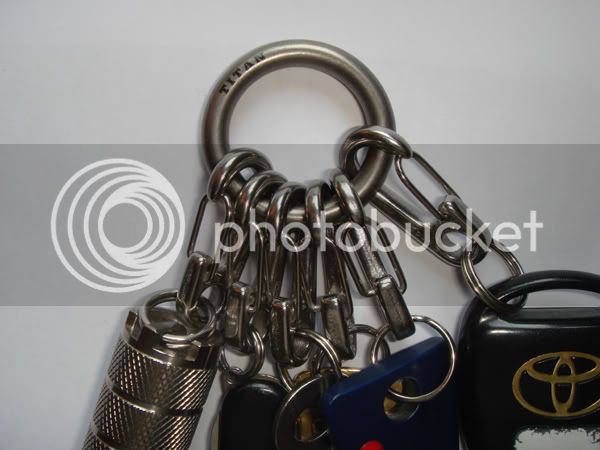 I've just sent an email to Mizumoto company regarding to " Would there ever be any Ti mini clips in the future ? If not why ?
P

A workable locking feature on a clip barely 1cm end to end might be a bit too much to ask for. Here's an old trick from the days before there were locking 'biners... I use it for my Draco - two reversed clips. Does the trick, no worries.