Some of you know I recently had some new boots made for the McClickie switch when it is used in a "rear loaded" configuration as in the Aleph McMule sets which have been offered up. I had these boots made because I plan to use the McClickie in this configuration of power pak moving forward with some new lights. I have one such light in the works now but it is clear to me that this light is still a good ways off. However, I already received the titanium paks for this light and these paks have applications beyond the light I have planned. I can offer these paks up as an accessory to be used with heads you already have and I can replenish these paks with another run from the machine shop without holding up the light in the works.

As you know, I personally prefer titanium in a flashlight and I also rely on a good belt clip for carry. I have any number of Aleph and SureFire E series heads which I still like to use and I think it's cool to host them on what I consider a timeless and virtually indestructible pak. I figure some of you may have similar desires and preference and for that reason, I am offering some of these paks now. 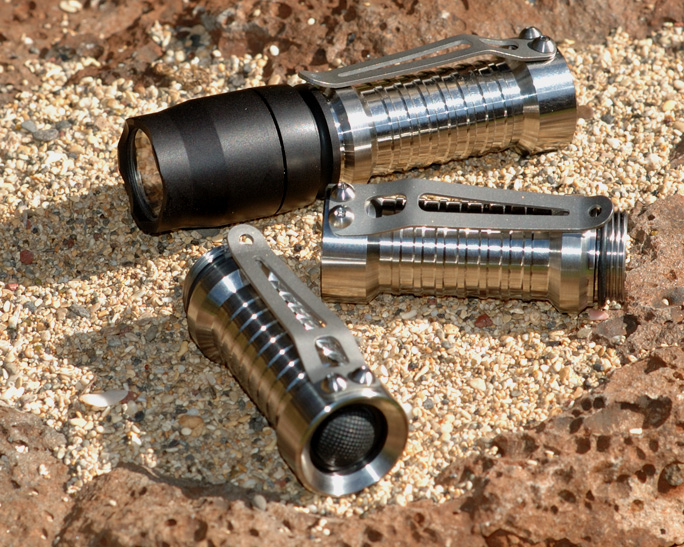 This pak is essentially a titanium version of the pak used in the Aleph McMule set with a revised tail form. Once I got the new silicone boots and had a chance to try them out, I realized I didn't need to leave as much access to the switch as I had felt was required in the first design of the pak. Instead of a relieved counter bore in the tail, a chamfer which left more meat for the clip screws was settled upon. I say settled upon because the machine shop had input in this decision and it was their suggestion over a more complicated, asymmetric design, I was proposing.

Now for some of you, the hybrid appearance of Ti in the rear and Al in the front may be less than appealing. To each his own. I personally prefer all Ti. However, from a functional point of reference, one could argue that the Al head is better suited for thermal reasons and justified in a design where function is the only or primary consideration. Above, a SF E1B head is hosted on a Ti McClickie Pak and I think the E1B head is a really cool, two speed component. I think it would even be cooler (not literally) if it were available in Ti but that's simply not going to happen. I have tried the E1B head on the Ti McClickie Pak as well as back on its original pak and I prefer the Ti McClickie Pak as host for a number of reasons.

I have called the pak timeless because for the most part, it is the front end which has evolved and keeps getting better as new LED's and drivers become available. 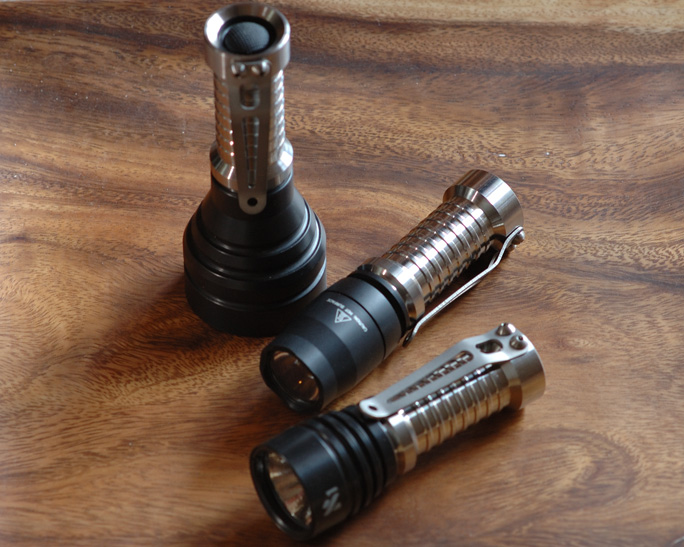 With a Ti bezel and Ti pak, the hybrid light can hold its own on many counts, IMHO. An example below with an Aleph 19 being hosted: 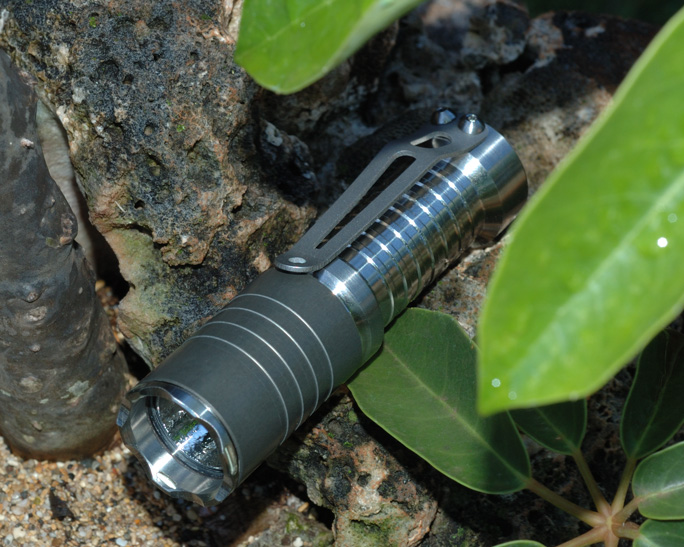 For general information on how the orders are processed and such, please review This Thread.

If you want one or more of these, please send me an e-mail with
Ti McC Pak
in the subject line as well as the quantity if more than one.

In the body of the e-mail request, please include:
CPF name
Real Name and mailing address & phone #
Any alternate shipping requests or request for insurance

I will respond with a confirmation of order received or a postage notification e-mail or both depending on how quickly I get to the requests and can process them. In the subject line of the postage notification I will include the total and please feel free to submit this amount via PayPal or other means at your earliest convenience.

These will be available on a first order received, first processed basis. I have the option of either setting this wave to 45 paks or 95 paks and that will depend on the interest shown as well as the time frame the interest is expressed. At some point I will need to decide the size of the wave and then place an order with the shop to replenish what I need of these paks for the light that is still in the works.

I will take one Pak!

i want one pack too.
mail sent

Im having a hard time justifying not getting one of this..


Correct. The wave only includes the Ti pak (Body and switch). It's up to you to provide and use any Surefire e-series, TNC e-series, or Aleph head

so you could choose on your own:thumbsup:

Email sent!
Thanks
Have a Great Day!:devil:

One more convert to the Ti side of the force

Cuso said:
Im having a hard time justifying not getting one of this..

A
Looking for red led driver

Module for a McGizmo mule that runs on a CR123